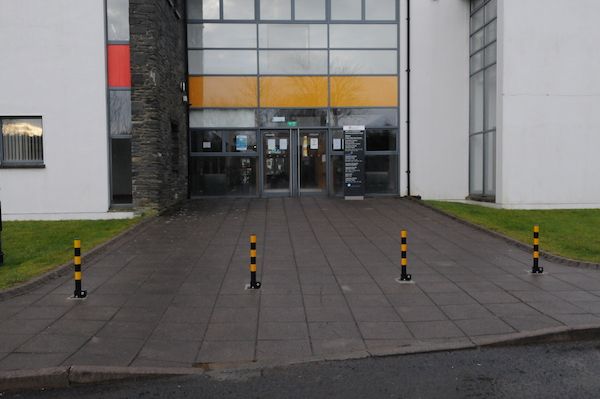 Anger after ‘father’ of council loses his traditional parking space

The Tirconail Tribune reports how there is anger among Councillor McGarvey’s colleagues over the decision.

The council have said their decision is in line ‘with best practice and respects the needs of all people accessing the building’.

However, Cllr. Ciaran Brogan said: “There is a very clear understanding amongst Cllrs that the actions in denying Cllr. McGarvey his right to park in a space he’s occupied for over 16 years is not any part of Council policy.”

Other colleagues of Cllr. McGarvey and his constituents have also rejected the official response’ as ‘a lame duck exercise’ that lacks any empathy with Donegal’s most senior citizens.

Cllr. McGarvey uses the public office in the building on a regular basis every week to meet the elderly as he lobbies for home-help hours: housing assistance and ‘Care of the Aged’ benefits.

Cllr. Jimmy Kavanagh raised the issue in the context of how it fits into the Council’s ‘Age Friendly Committee Initiatives’ and said the optics are terrible in this situation and sends out all the wrong signals in relation to issues about the elderly and the Council’s own policies in this regard.

Ian McGarvey, a legend in his own community has been a leading figure in the ‘Donegal Care of the Aged Committee’ in former times, will celebrate his 90th birthday in July and has been a community activist all his life.

The Mayor of the Letterkenny Municipal District, Cllr. John O’Donnell said he was shocked with this decision and especially at hearing it from the media instead of a Council meeting where no consultations had ever taken place on parking issues of any kind.

Cllr. O’Donnell said: “This story is news to me and I am shocked that Cllr. McGarvey has been treated in this manner. We’ve had no consultations on parking issues at the Milford offices and insofar as I’m concerned there are no problems of any kind there.

“I’ve sought an urgent response from the Director of Services involved and I await a reply with interest.

If any issue had arisen the place to have it dealt would have been at the Municipal meeting and I have no idea how this has happened,” he added.

Cllr Michael McClafferty said: “I regard Ian as a father figure on the Council and he deserves the utmost respect from everyone employed by the local authority. I am calling for this most insensitive decision to be reversed because we must not allow it to reflect on the good work done by so many in Lifford.

“I want to know how this decision came to be made and why the parking space Cllr. McGarvey had occupied during all his time on the Council has now been arbitrarily removed without consultation. He deserves our people should show him utmost respect in his Golden years fighting on and showing others how it’s done.

“This decision is not what I would have expected from the Council and if this is the way they treat their most loyal member of the team, then they need to revisit this decision and ensure that Cllr. McGarvey’s parking spot is reinstated urgently,” he added.

Cllr. Brogan added that at the most difficult time in Irish history since the famine days, the public in Donegal would have expected that officials of their council to be addressing more relevant priorities instead of denying the country’s most senior public representative the right to park where’s always done so and without any issues being raised.

He added “Ian McGarvey is a legend and a man who’s always put the priorities of this country and the people first and I would have expected that his work would have been recognised in more positive way than has now arisen. I am shocked at this development and will strive to have this decision scrapped urgently.”

Amid public anger and dismay as the decision became known over the weekend, the Tribune raised the matter with the Council.

We understand that Cllr. McGarvey has raised the matter on occasion with Council personnel in Milford but says his pleas have fallen on deaf ears.

A spokesperson for Donegal County Council said “Revised parking arrangements have recently been introduced at Milford Public Service Centre arising from a review by the Milford PSC Health & Safety Committee.

“The new parking arrangements are in line with best practice and respects the needs of all people accessing the building including our elected members, staff and general public. The arrangements are being monitored and will be reviewed at the next Health & Safety Committee meeting”.