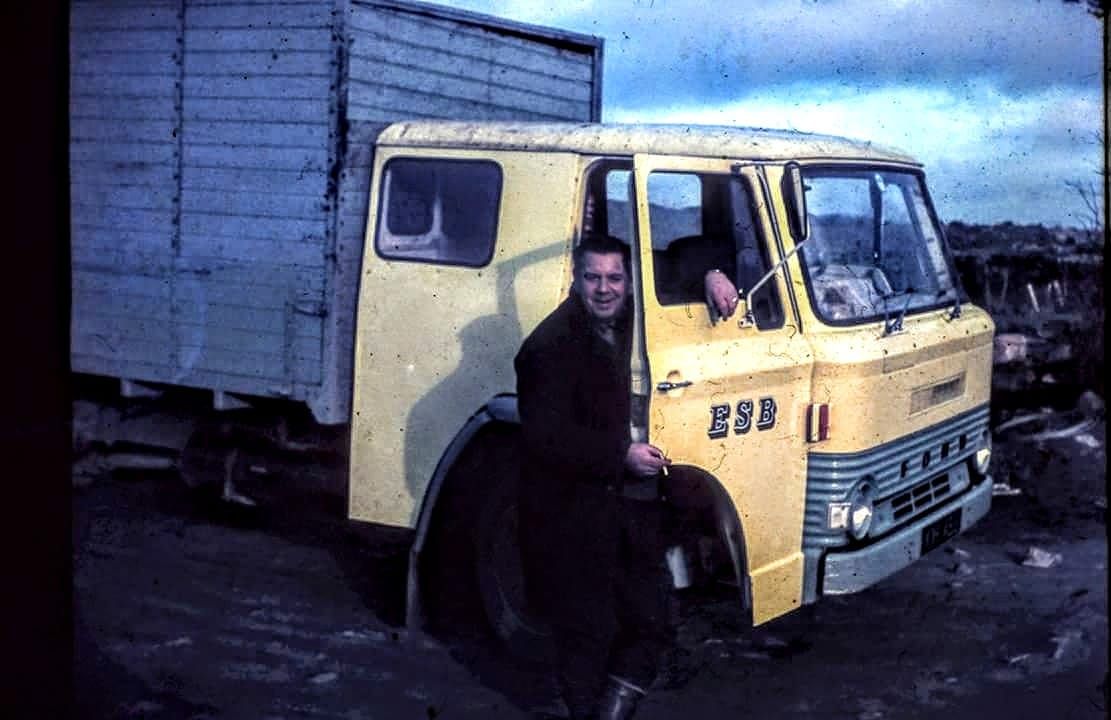 Motoring Columnist Brian McDaid looks back on the days when he skipped school to go with his father Fred on his ESB truck to Sligo.

This is the place, I’m sure, I thought as I turned into the housing estate on Tuesday morning, miles from home both in distance and in time, it’s old concrete road was still in place, the perfect foundation to build from in this present day journey of uncertainty.

It could be the last trip on the road for a while as Ireland is coming to a standstill which is hoped will also bring this deadly virus to a stop. I have regularly made trips to Galway over the last 10 years mostly as an unpaid Uber taxi service and U-haul contractor for my children in college. Over them years I have always stopped for a “coffee to go” in Kee’s of Laghey for our journey onwards. As we passed through the village of Grange in Co. Sligo  I’d always toasted the memory with my coffee –  introduce my wanes to their grandparents, Fred and Mary Ellen who they never have met and pointed out where they once lived beside the Post Office where Mrs. Molloy was the post mistress and also was the landlady.

Preparing for this trip to Galway this week I decided by a way of avoiding contact with anyone on this journey to pack a flask and some sandwiches and never leave the car.

The old thermos flask sitting in the passengers footwell had my mind moving to years before. With only myself and my thoughts and loads of time for the journey plus the fact I didn’t pack the cup with a lid, and the house full of them too. I was going to have to stop for the coffee on the go this morning. It was always on my bucket list to stop someday in the same spot that my father Fred always stopped on the days that I skipped school with my “phantom flu” to go with him in his ESB truck to Sligo.  A mile out the road past Grange, on the present-day Sligo Road, which runs parallel with the overgrown old Sligo Rd, at a point where an old junction linked the past and the present.

Fred at the door of his old ESB Ford Truck which we unofficially enjoyed manys the adventure.

Where once a hard shoulder stood now is gone, so for safety I pulled across to the old road and cracked open the flask. As the steam misted up the front window beautiful Ben Bulben faded out of view. My sandwich changed back to a piece, the name we always called sandwiches back them complete with one finely cut square from a block of Galtee cheese in it.

I was back in the cab of an old Ford Truck with the smell of a match lighting a Major cigarette listening to a story of a couple out for spring walk with their newly born child in the pram,  passing through the same spot I’m am sitting today.

That was in ’64 and now in ’73 a father is telling the story to his son of only memories that he has of his wife. The father coughs away a tear and fires up his old truck and heads for Sligo before his son notices.

They both go over their plan of action. Children are not supposed to be transported in an ESB lorry, so the son will get out at the bottom of Bridge St. just before the head office where the father has to make a quick delivery and collection.

The son slowly walks,  crosses the bridge crossing the Garavogue River watching his father’s progress as he turns in the yard at Headquarters and then turns left and slowly heads in the direction of Dooley Park, where the ESB have a second premises where only the one man works, Doc Doherty who is originally from Donegal,  his father soon will catch up along the way.

The son knows the sound of the engine and the way his father drives it and will hear his father’s lorry long before he sees it.

The son is soon back in the passengers seat of  Donegal’s KIH 459 as the truck indicates right into Dooley Park.

This is the place, I’m sure, I thought as I turned into the housing estate on Tuesday morning, miles from home both in distance and in time, it’s old concrete road was still in place. I slowly make my way up through the housing estate, memories of road trips coming flooding back.

The estate even has its sign now in stone, it’s Doorly Park apparently, ahh its still “Dooley Park” to me.

Another turn right at the top and the old ESB yard should fall into sight.  It should be just here … What, why is a Lidl store here now, damn, now the  ESB is on the other side of the road and now it’s the ESB headquarters for Sligo,  as always I detour it just like the old days and avoid it, and just for old time sakes I complete my journey to my memory and turn left and do a lap around Lidl Carpark thinking of the old yard which was a disused factory without a roof, and a makeshift wooden ramp in place which my father carefully guided his truck in to get loaded up through the front door of what one was a reception.

Gone are the sounds of the Doc singing or whistling as he’s darting about in the forklift, I felt like a young Marty but probable look more like an old Doc, not Doc Doherty in the old ESB yard but more like Doc Browne in “Back to the Future” as some impatient shopper blew their horn to take me out of my day dream to tell me to move on.

I smiled to myself as my memories charged up my batteries like a load of transformers that my late father would have hauled back to Letterkenny as he headed back in to my memory and I headed to Galway to haul his grandson’s truckery home.

I was saddened to hear of the passing of the late Hugh Conaghan the week. Most will know him in his political life as a Donegal Co. Councillor and T.D. but I got a chance to chat with him a few years ago when he told me of his days working on the Railway as an office Clerk in Newtowncunnigham Railway Station where his father also worked, I have included a small clip of his voice talking about the communication on Lough Swilly Railway which was all done by telegram.

May he rest in Peace.