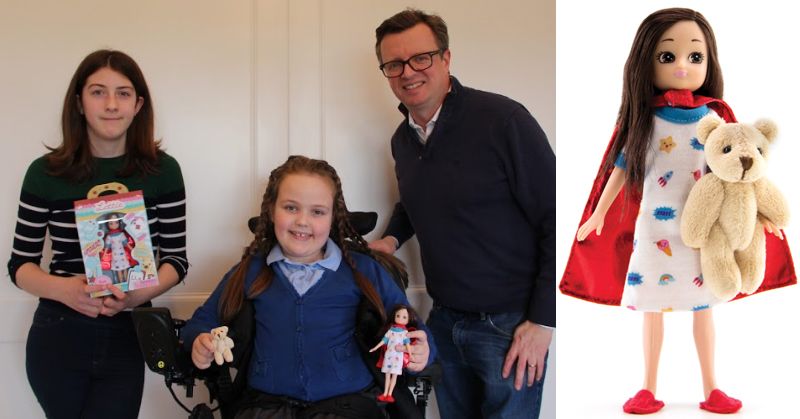 Donegal toy company Lottie Dolls have launched a new charity doll in honour of brave children who need to go to the hospital.

The ‘True Hero’ doll, dressed in a gown and cape, is set to be the perfect companion for children who make regular hospital trips or are visiting someone who is unwell.

The idea was born from a partnership between the Letterkenny-based Lottie Dolls and 13-year-old STEM star Aoibheann Mangan.

The Mayo schoolgirl developed the doll to help ease her best friend Grace’s fears as she undergoes hospital treatment.

Grace has SMA Type 2 (Spinal Muscular Atrophy) and is a hero to Aoibheann. Last year Grace successfully campaigned for every child in Ireland to be given access to the drug Spinraza, a drug that works on 50% of SMA Type 2 patients and significantly improves their life quality and life span.

Her pal Aoibheann has a passion for coding, and has been developing websites from a young age. At the age of 11 Aoibheann, decided to build an app for Grace to take the fear out of hospital visits. Her ‘Holy and Henri Hospital App’ based in the coding language scratch describes the 10 main procedures that kids have when they arrive at the hospital.

The idea helped Aoibheann win European Digital Girl of the year in 2017 in the 11 to 14 category. Aoibheann is a STEM (Science Technology, Engineering and Maths) advocate and teaches coding to 50 kids in her hometown each week, 60% of whom are female.

Aoibheann has been a champion in Ireland for rural broadband from the days when her mum drove her every evening to the local Tesco supermarket carpark where she was able to access their free WIFI in order to continue her education in coding.

In February of 2020, Aoibheann was awarded by the UK’s Everywoman Technology Awards as “One to Watch”.

CEO of Lottie Dolls Ian Harkin shared a stage with Aoibheann at Inspirefest in 2017, and they have been in contact ever since.

Now, with the release of the True Hero, Aoibheann’s coding skills will be shared even further. A QR code on the box of the doll allows children to download Aoibheann’s Hospital App for free.

Mr Harkin said: “Aoibheann and her mum Iseult are incredible, I remember being on the side of the stage with 11-year-old Aoibheann and she was saying she had never spoken to such a big audience before, she had the audience in the palm of her hand within minutes, she is an amazing role model for young kids and in particular she has a passion to get more girls interested in coding”.

€1 from the sale of each True Doll doll on eu.lottie.com is paid to Aoibheann to assist in funding her advocacy work and €1 will be paid to Crumlin Children’s Hospital.