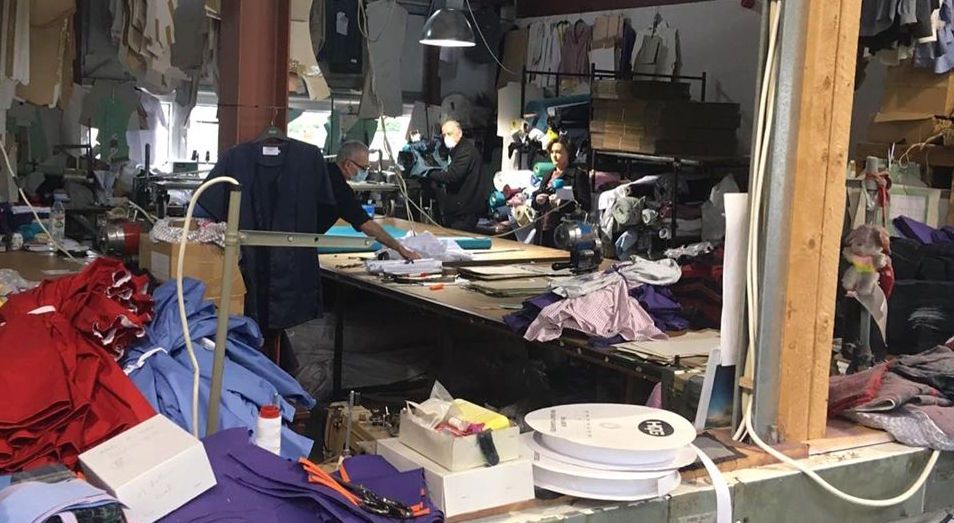 A campaign to help a Donegal clothing company make scrubs for frontline medical staff has become a huge success with the public donating more than €35,500 – enough to make 500 sets of scrubs.

Now Moville Clothing is working around the clock following the idea by local designer Edel MacBride.

Edel’s plan was to gift a set of scrubs to a friend.

But little did she know that the plan would capture the public imagination.

“I have known this factory for a long time and knew they were doing the right thing at the right time. They have a great reputation and are genuine. previously they made priest shirts and barristers cloaks.

“I rang and asked to gift a set of scrubs and while talking to Ray the owner realised others may like to do the same. He felt the same anger about Health Workers buying their own scrubs.

“He had reduced the manufacturing price as low as possible due to COVID-19 and felt the government could order them, but had not.

“Ray told me the phone was hopping with health care workers ordering their own and he wished he could do more for them.”

Moville Clothing usually make garments such as clerical attire and clothing for barristers.

But that switched to frontline medical clothing when the Covid crisis erupted in recent weeks.

Edel said she is simply overwhelmed by the response of people wanting to donate sets of scrubs.

She said “What can I say? I’m overwhelmed by the outpouring of support. Ray is on the factory floor today getting as many sets of scrubs as possible organised.

“Again thank you, this has already given many a boost to think “someone cares” out there.”

If you would like to donate a set of scrubs and make a donation then please go to https://www.gofundme.com/f/pledgescrubs?utm_medium=copy_link&utm_source=customer&utm_campaign=p_lico+share-sheet&fbclid=IwAR0GNcSszX2g8Z7Xa6yIUZTn5PbleRP_wAcp8nH2YFeEByUQQWlcm1NXjoc