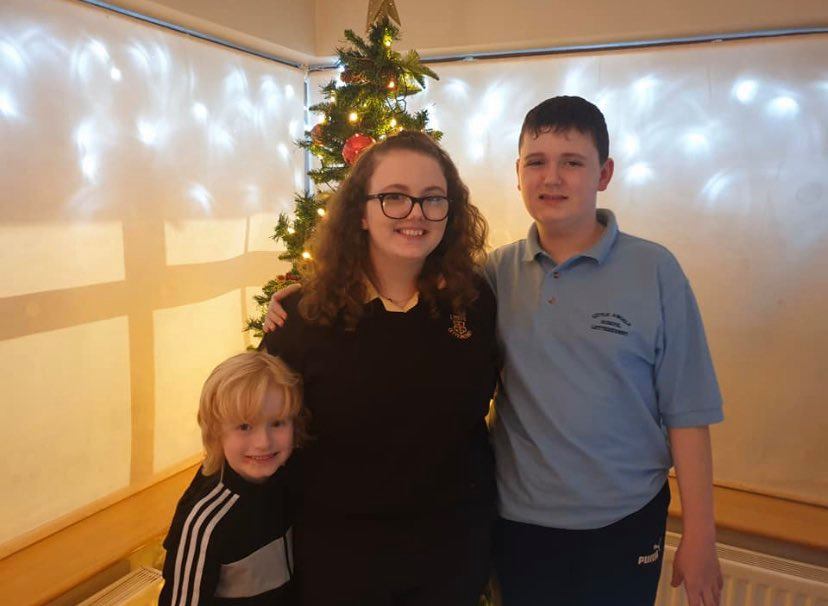 THE LOCAL McDonald’s came to the rescue of a Letterkenny mother to help ensure her son, who has autism, can still enjoy a Happy Meal.

Friday is McDonald’s Day for many, but following the closure of all branches across the country on Monday evening, due to the spread of the Covid-19 virus, Tina Clarke began to panic.

Tina’s 13-year-old son Reece (above, right, with his brother and sister) has autism and lives by routine.

Breaking the normal schedule can cause quite some distress.

His granny and graded are following physical distancing guidelines and were unable to pop by for their regular Wednesday visit this week. The prospect of no McDonald’s had Tina worrying – but thanks to the help of Victor Byrne the manager of McDonald’s, Letterkenny, Friday is still McDonald’s day for the Clarkes.

“He gave us boxes of stuff, even the wee chip holders, the Happy Meal boxes and toys, we are just so thankful,” Tina told Donegal Daily.

“I saw the post on Sunday evening and thought at first it was someone just scaremongering. Panic set in and I messaged Victor: ‘Please tell me it isn’t true’.

“Unfortunately it was. Victor told me not to worry and said to come in on Monday before they closed. He came out with these two boxes. It was an amazing gesture.”

Reece attends Little Angels in Letterkenny and routine is very much a part of his life. To sit down and tuck into a Happy Meal means everything.

“People might look at say it’s no big deal for McDonald’s to be closing, but for us it was a huge thing.

“Reece could get so frustrated and it causes a big build-up of pressure for him. He has been getting gushing nosebleeds the last few days so he’s already going through this and you can’t simply just explain to him that McDonald’s is closing and that’s that.

“My youngest son (Mason, aged six) only eats plain pasta, McDonald’s chips and noodles, so to have one of those pulled away was going to be so hard.

“We have had services, like the speech therapist and psychologist withdrawn. Everything has been pulled, but this has managed to keep some sort of a routine in the week.”

Tina was contacted by another mother of a child with autism last night. Tina arranged to meet her in a Letterkenny car park to give her some of the McDonald’s food.

“It was funny, we met in the car park and I just threw the bag over to her,” Tina says. “I think all of this will bring people closer together. We should be supporting local businesses after all of this.

“McDonald’s have always been so autism-aware. They are so aware, so caring and their staff are amazing. Nothing is ever a problem.”

Victor is the father of three children with autism and understood Tina’s predicament immediately.

“Children who have autism have a routine and have their set ways,” he said.

“Telling a child with autism that they can’t go to McDonald’s is like telling them the world was ending.

“Under normal circumstances, McDonald’s would not let people have our products like this, but this is an exception.

“People have been so grateful for what we’ve done. With all that is going on in the world, it is nice to do something like this.

“It’s a tough time, so it was good to help someone like this.”