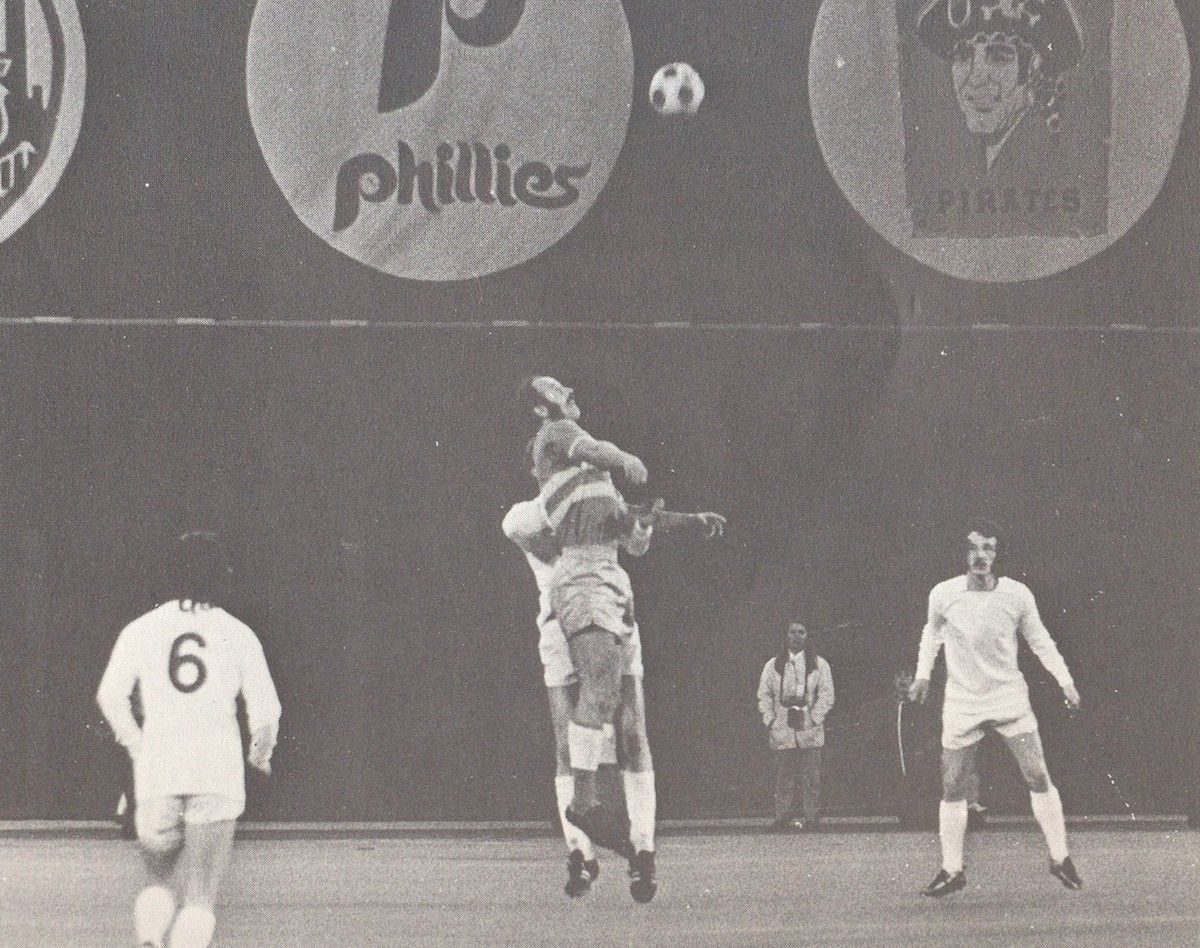 THERE IS a passage in Patsy McGowan’s autobiography, The Strings Of My Harps, that stands out more than the other memorable tales within.

As the 1972/73 season was coming to a conclusion, Harps were invited on a tour of the United States and Canada.

At the end of what was only their fourth season in senior football, it was a measure of how McGowan’s charges had captured the attention of the public in those infant years for the Ballybofey club.

Harps flew out from Shannon for the 18-day trip across the Atlantic in mid-May 1973. Changing flights in Kennedy, they made their way to their first base, Philadelphia.

McGowan recalled the abiding memory for him as they made their way to the team hotel from the airport.

“As we drove through the teeming city with its racial problems, in the distance I could see what looked like a familiar name right on top of the city’s highest building in lights,” he wrote.

“As we got closer, I felt a thumping in my heart because, there for all to see, was the name Finn Harps.

“I felt really proud! We had come all the way from the bottom of the football ladder right to the top of one of the biggest cities in the world.”

Clive Toye was the President of the New York Cosmos. He helped organise the tour and in 2002 he said of the Harps visit: “In those early days of the NASL we were trying to encourage ex-pats and immigrants who were soccer fans to come and see the teams in America.

“Harps were one of the top sides in Ireland at the time so who better to bring? I do remember that the crowd at the Cosmos game included a good number of vociferous, and celebrating Irish supporters.”

A game with the Philadelphia Atoms was the first of eight games Harps would play across seven cities during their stay.

A close examination of a photograph from the game depicting Jim McDermott of Harps and Atoms ‘keeper Bob Rigby shows that McDermott and Rigby are not wearing football boots. 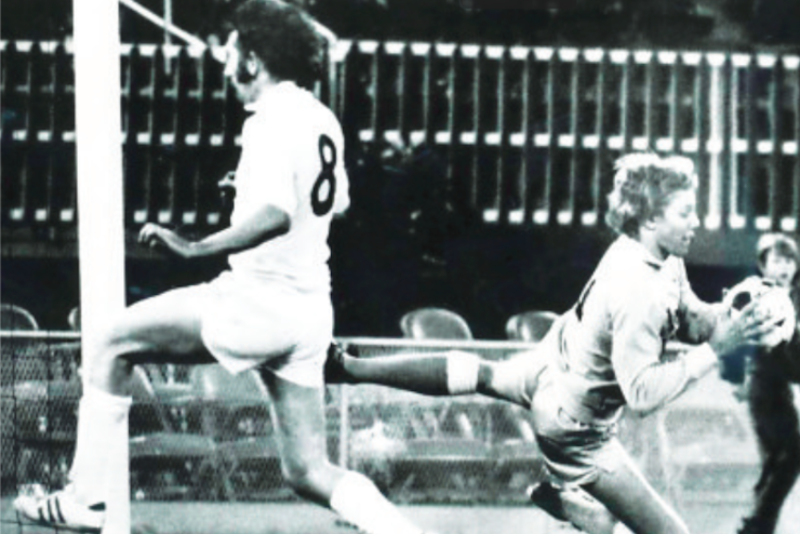 Rather, they are wearing trainers as the surface was artificial.

In 1973, artificial surfaces were unheard of in Ireland.

“We knew absolutely nothing about all-weather pitches,” recalled Gerry Murray, the Harps goalkeeper of the time.

“It was a huge pitch, a great big stadium, a baseball arena. It was an 80,000 seater stadium and the artificial surface was something we’d never experienced before.

“The likes of McDermott and big Jim Sheridan would always have been used to roaring into sliding tackles. After the game, their legs were just covered in pure, raw flesh.”

Over 10,000 people were in attendance as Harps took on the Atoms.

The memories might have faded in the years that have passed, but Murray – who’s still a regular around Finn Park – recalls one particular incident from after the 4-0 defeat (Andy Provan netted a hat-tick and Karl Minor scored the other) to the Atoms. 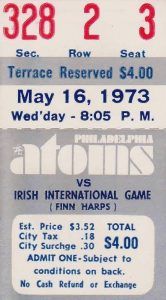 A ticket from the Philadelphia Atoms v Finn Harps game

“As facilities go, that one was the biggest any of us had ever played in. The Philadelphia team was mostly players who had been English based or Scottish.

“The dressing rooms in the place were massive and after the game we were taken into a place in the stadium that seemed like a hotel.

“A few years before that, Dunfermline had played a game against us in Ballybofey. But the night we played Philadelphia, we were mingling and one of the players who’d played for them (Philadelphia) was a Scottish man. I got talking to him and it turned out that he’d played for Dunfermline that night and, not only that, but wasn’t he married to a girl from Donegal town. It’s a small world.”

The trip lasted 18 days with Harps returning again on June 6th. The sponsoring club, the New York Cosmos, paid the estimated £40,000 expenses for the Harps party, which comprised 17 players and five officials.

RESULTS FROM FINN HARPS’ TOUR OF AMERICA IN 1973

“It was a great experience at the time,” said James Barclay, another of the Harps playing staff who graced America.

“We had a fine side, some great players, back then – the likes of Peter Hutton, Charlie Ferry, the Nicholls and Jim Sheridan.

“A trip like that was all new to us, but we held our own in a few of the games.

“Soccer was only just getting off the ground in America back then, though the standard was mainly the same as ourselves. It was a fantastic experience to be out on a trip with a team for the best part of three weeks.”

Harps won their games against Boston Astros, Olympique Montreal and Shamrocks. The 8-2 win over Shamrocks was actually played at Gaelic Park, the home of Gaelic Games in New York.

“I had heard so much about this place over the years I was looking forward to not only seeing it, but playing soccer on it,” McGowan wrote.

But what they were greeted with would stun the visiting party.

“For a moment I thought we had come to the wrong place,” McGowan continued. “I looked at Gerry Murray and said ‘Holy Christ, what a dump!’ This was one of the worst playing surfaces I had ever seen. The dressing rooms were a disgrace and the surroundings were a mixture of a railway siding and a dump.

“If you were a GAA fan and saw the place you’d die from shock.”

THE HARPS SQUAD FOR THE TRIP WAS:

Murray, for whom the trip to Niagara Falls on route to the Canadian legs of the tour was the most memorable part of the trip, also recalls the shock when their coach pulled up at Gaelic Park.

“We had all heard so much about the place, we were expecting something massive,” he said. “But it was an awful facility at the time and the night we played on it there was hardly a blade of grass on it.”

Harps got $100 a game with the players each receiving $15 a day spending money during the trip.

Although Brendan Bradley is listed in the panel in the programme for the Philadelphia Atoms game, the Derryman didn’t travel with Donal O’Doherty going in his place.