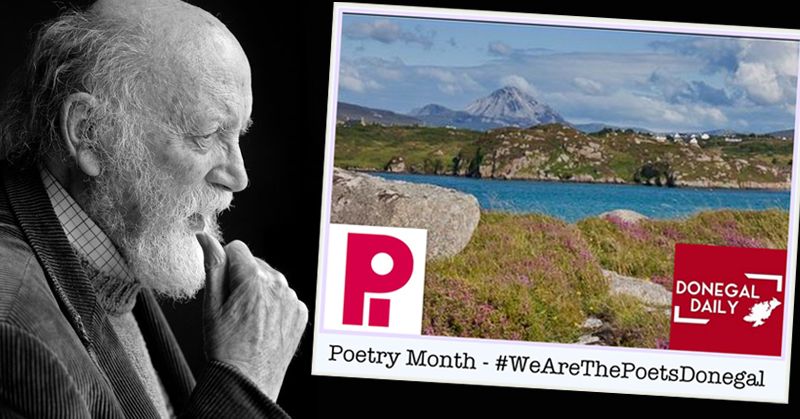 Today marks the start of an exciting new series on DonegalDaily.com to celebrate a month of poetry in association with Poetry Ireland.

Each day this April we will share poetry by established poets from across the county.

With Poetry Day Ireland taking place on Thursday 30 April 2020, this series invites you to take a moment to read, enjoy or share poetry.

We begin with two poems by the late Francis Harvey:

Francis Harvey was a much-admired Irish poet and short fiction writer. Born in Enniskillen, Co Fermanagh, Mr Harvey lived most of his life in Co Donegal, a county and its people that he celebrated in unsentimental fashion through his work. He published five collections of poems, most recently Donegal Haiku (Dedalus Press, 2013), as well as Making Space: New & Selected Poems (Dedalus, 2001). His Collected Poems appeared from Dedalus in April 2007. Much of his work celebrated the flora and fauna of the Donegal landscape which was both his home and his inspiration on many walks and excursions, prompting Donegal poet Moya Cannot to refer to him as “a Basho-like figure”. Among the many prizes his work received are The Irish Times/Yeats Summer School Prize, The Guardian/WWF Prize, and a Peterloo Prize. Francis Harvey died in 2014.

Visit www.poetryireland.ie for more as we countdown to Poetry Day Ireland.

If this series has inspired you to write your own poetry, you are invited to send them in to wearethepoetsdonegal@gmail.com to be featured at the end of the month.