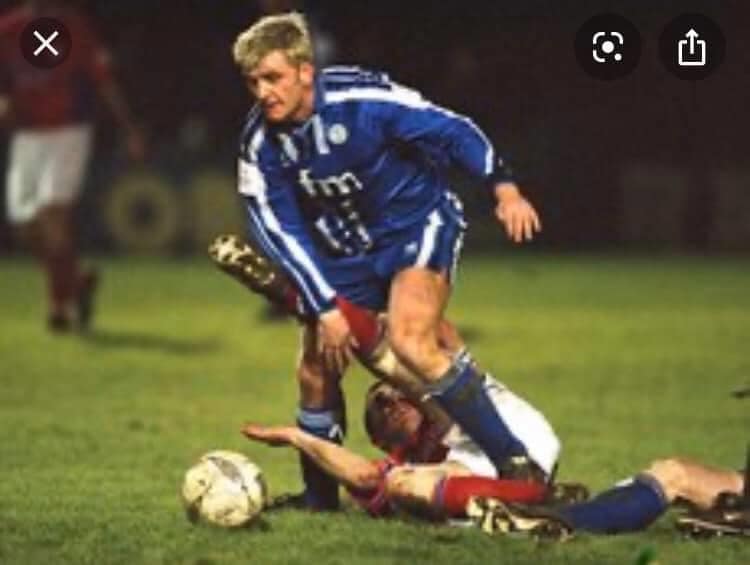 NEIL Fitzhenry knew little about the League of Ireland, let alone Finn Harps, when he arrived in Donegal in September 2000.

The Englishman signed for Harps after a troubled time at Chester City.

Picture: Neil Fitzhenry in action for Finn Harps during a memorable FAI Cup game against Shelbourne at Finn Park.

A frustrating period at Chester had wages coming sporadically and the club’s financial plight meant that bouncing cheques were a regular occurrence.

Not long into his time at Finn Park, the financial hammer fell on Navenny Street, too, but Fitzhenry recalls with great affection his time at Harps.

It’s almost 18 years since Fitzhenry donned the Harps blue for the 62nd and last time in the ill-fated play-off meeting with Longford Town at Finn Park in April 2002.

Tom Mohan’s penalty, saved by Stephen O’Brien in sudden death, is an image that still casts a haunting shadow over the Town End goals at Finn Park. Even with Harps back in the top flight these days, the night remains one that chills Harps followers who recall one of the old ground’s epic nights.

A year earlier, Longford condemned Harps to relegation with a dramatic 2-1 win.

A late Niall Bonner goal in the very same net that Harps would fall a year later looked to have rescued the Donegal side.

Word filtered around Finn Park that Galway had drawn level against UCD. They hadn’t and Fitzhenry and Harps went down.

‘Fitzy’ departed after that play-off game, but has stayed in touch. He keeps contact with former club physio Mickey McGlynn and some of his former team-mates.

“When I returned to England, I studied Physiotherapy in Newcastle for three years,” says Fitzhenry.

He worked for a while with top rugby side Northampton Saints – who reached the 20011 Heineken Cup final and continued to play football semi-professionally at Leigh, Southport and Burscough.

Six trophies were won in that time before he got offered a job as Youth/Reserve team physio at Wigan Athletic. 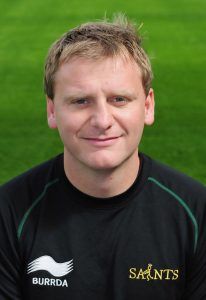 Neil Fitzenry was a physiotherapist at Northampton Saints

The wheel had come full circle. Fitzhenry was back home again. It was the club he had started off at, back at his beloved home town club and he describes as ‘fantastic’ the three and a half years he spent at the Latics underneath Paul Jewell, Chris Hutchings, Steve Bruce and, for a short period, Roberto Martinez.

While home was where the heart was, things didn’t work out for Neil at Wigan.

He says: “Unfortunately there was not a real drive at the club to invest in the youth set-up, as it was just solely geared around staying in the premier league because of the financial implications. I found this frustrating and became a little disillusioned.”

For the last 18 months, Fitzhenry has been based in Qatar.

He worked as Head of Performance with Cirque du Soleil for for 2 years, traveling all over Europe and North America.

“It was an amazing experience,” he says, “but it involved living in hotels and packing a suitcase every week – that’s harder than it sounds.”

For the last two years, he has been based with the The International Physiotherapy Centre, a large private clinic.

“I really enjoy it,” he says. “It’s a nice lifestyle, great weather for nine months of the year and the World Cup is going to be here in 2022. 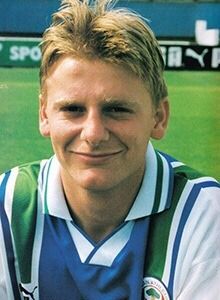 “I had a few old colleagues who worked here and I liked what they said about experience. I’m working with a good mixture of groups and I really enjoy it. I certainly see myself here beyond World Cup in 2022.

Fitzhenry had been at Wigan as a youngster before signing for Chester City.

The opportunity to sign for Harps came out of the blue, but was the perfect escape token from a difficult time.

He says: “I spoke with Gerry Cassidy who was an agent at the time, and the opportunity to play in Ireland came up and I jumped at the chance due to the uncertainty. Little did I know that I was walking into a similar situation!

“I didn’t really know anything about the League of Ireland. I was just desperate to play as I had had a terrible time with injuries the previous two years, and was fed up with all the uncertainty at Chester.

“The standard of the league was similar to the level I was playing in England. I’d compare it to the Conference or League 2 in my opinion. There were very good teams and some very good players.”

He had barely settled in Ballybofey a month when the bombshell dropped. After players wages weren’t honoured, the Chairman of the time Martin Hannigan publicly declared the club in debt to the tune of £356,000. The club was close to the brink and a meeting in the Villa Rose was attended by 200 supporters. 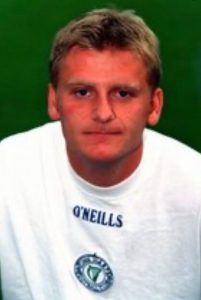 “I’d also come over as a professional and it was my only source of income which was worrying. It was something that I was not expecting. When I was signing, people were very positive about the direction the club was going in, then within about six weeks everything seemed to change and people were leaving and some were not being paid.

“However, in defence of the people in charge at the time I was always paid, even if a little sporadic at times, and I appreciate that a lot of people worked exceptionally hard to make this happen.

“To be honest this made me want to do well even more as I wanted to justify all the hard work that people were undertaking on my behalf.”

“Relegation was just awful, probably the lowest point I have experienced as a footballer,” he says of that hurtful May Sunday in 2001.

“We unfortunately had a poor start and left ourselves too much to do, and despite a fantastic run at the end of the season we fell just short.

“I feel if we had stayed up that season, and kept that team together we would have more than held our own. We probably were just lacking a few leaders, but there was a lot of talent in that squad particularly Jonathan Minnock and Paddy McGrenaghan.”

Fitzhenry remained loyal to the club for the following season.

Fergal Harkin, Jonathan Minnock, Don Tierney and Gareth Downey all departed during that closed season. Gareth Gorman, Shane Sweeney and Brendan Devenney were among those signed, while the retention of Fitzhenry, Tom Mohan and Johnny Kenny was a real coup.

“The following season went well considering we lost some of our better players,” says Fitzhenry.

“We were fortunate that Kevin McHugh was coming of age and established himself as one of the best strikers in the country. The signing of Declan Boyle was a masterstroke by ‘Speakie’, allowing myself to move into midfield and we really had a strong looking team through the middle.”

That season gave Harps some really memorable nights. There was an epic Cup win over Shelbourne at Finn Park – the highlights of which were shared on the Harps YouTube account last week –  as well as three 3-3 draws during the season, a 1-1 Cup draw in the cauldron of Oriel Park and then there was that harrowing play-off defeat.

Harps lost the away leg in Flancare Park 1-0 and the tie delicately poised before a white hot Finn Park heat.

“I remember hitting the bar with a header early on and I think we were unfortunate over the two legs as I felt we were the better team,” Fitzhenry recalls.

“Levine scored an absolute screamer from nowhere to put them in the driving seat and then we were chasing the game and fell further behind.

“‘Speakie’ came on and was fantastic as was Kevin McHugh, as he had been all season. Kevin scored a brilliant hat-trick, we managed to pull the tie back around and then it was penalties…

“I had gone off and couldn’t take one which I was gutted about, and then it was just a lottery. Unfortunately. Tom was the player to miss, which was very unjust as he is probably the nicest man to have ever played football, and was a fantastic player for the club. It was not the best way for me to play my last game for the club.

“I was distraught after that game. I really wanted to help the club get back up as I felt at least I could leave the club where they had been when I came.”

His time might well have ended in tears, but a smile lights the affable Englishman’s face as he talks of his fondness for all things Harps.

“I had come to the club after virtually two years of being injured on and off, so it was great to get a good run of games. I also thrived on being one of the more experienced players in terms of football experience rather than age – I was still only 22 at time.

“The players and staff at the club were brilliant to me in terms of making me feel welcome, and the local community were so friendly and supportive that I really enjoyed living in the area also. I look back on my two years there very fondly.

“I’m still in touch with few of the players from time-to-time. I managed to get to a match against UCD a few years ago as a friend of mine lives in Dublin, and it was great to catch up with a few of the boys.”

Neil Fitzhenry played 62 times for Finn Harps, starting 61 of those, and he netted two goals for the club – the first in a 3-1 win at home to Athlone in December 2001 and the other in a 3-3 thriller with Kilkenny City in March 2002.