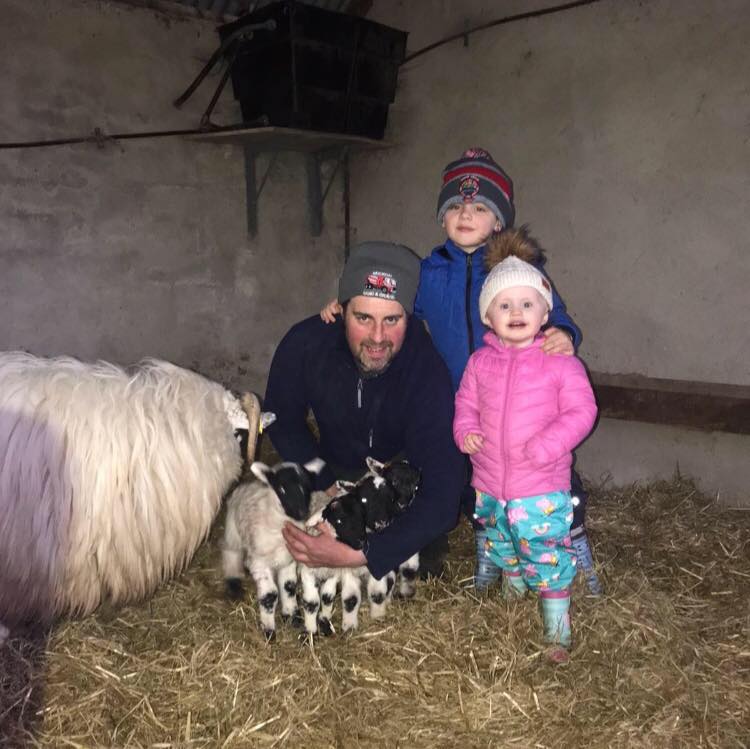 THERE was great excitement on a Creeslough farm on Sunday morning as a sheep gave birth to quadruplets.

The Gallagher family at Cloonemore, including six-year-old Luke and two-year-old Ciara, toasted the arrivals.

“They’re all healthy, thank God. We’ve had quads before with the lowland sheep, but I’ve never heard of it with a blackface horn.

“The wee ones were all excited and they’re helping out with the feeding of the lambs. It’s great to keep them busy during these times we’re in.”

Ciarán knew of the arrivals after Shaun McHugh scanned the ewe after 90 days.

“To be honest, I didn’t think that she would hold them because it can put a lot of stress on the body,” he said.

“I couldn’t believe it that day Shaun said ‘four’ to me. ‘Definitely four’, he said.

“It’s rare for four to survive like that because of the stress, but the management was key. We kept her outside and segregated over the last wee while.

“She lambed two of the no problem. We just had to keep checking and there was no sleep at all there. You can’t afford to sleep or you could lose them.”

It has been a busy time for the Gallaghers, who have 100 blackface sheep and 60 lowland sheep.

Ciaran said: “We had all the lowland sheep lambing together. We had the all cycled and seasoned to arrive together.

“We’ve had a lot of triplets this year. I’m not sure why that is, but it has been very exciting for the wee ones especially.”