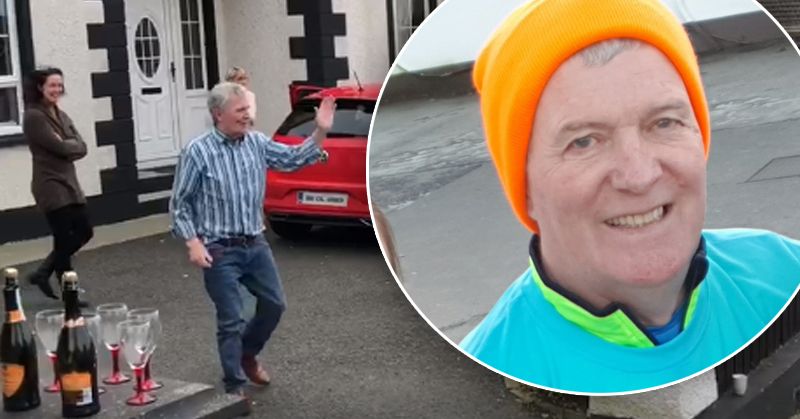 A Donegal man has been welcomed home with open arms after overcoming a critical case of Covid-19.

Donal Bradley from Buncrana is happy to be alive after being brought back from the brink during a 13 day ordeal in ICU. He was on a ventilator for an entire week, and doctors told his family that it was ‘touch and go’ as he fought the illness.

But the 65-year-old grandad pulled through to recover and be reunited with his family.

And he was given the homecoming of a lifetime today. A popular local driving instructor, Donal was treated to a welcome-home applause from all his neighbours as they stood outside in their family units.

“He is just so happy to be home and happy to be alive,” Donal’s daughter Julie told Donegal Daily.

“We had seven days where he was ‘gone’. But we kept hoping and praying. Even the doctors and consultants said they didn’t know how long his lungs would take it. But they saw an opportunity on the seventh day to pull him around.

“We picked him up today in Letterkenny, he was so happy.

“He’s still weak, he’s lost weight and he’s lying on the sofa now, but he’s breathing on his own. He’s here.”

Donal’s illness began near the end of March when he developed the common symptoms of coronavirus. He began coughing, feeling freezing cold and having a temperature, and having rough nights of delirium.

“When I saw him he looked grey, half dead,” Julie said.

Donal was admitted to Letterkenny University Hospital on 28th March and immediately went from A&E to Intensive Care.

After two days, he was transferred to Galway, where he remained until Sunday when he was finally taken off the ventilator.

Throughout this critical time, his family had to anxiously rely on phone updates from doctors and nurses.

Donal’s care in both Letterkenny and Galway and the contact his family received were second to none, they said.

Julie said: “The staff, the doctors, all I got from them was first class. Considering we have never had to do these things before. They are used to talking to families face to face when a patient is in ICU, but they were so good to us.”

Julie, the eldest of six, was appointed to relay the updates from medics to her mother, Denise and all her brothers and sisters.

Meanwhile, the family had the support of their entire community during this agonising time away from their husband and father.

“The support was unreal, the whole town was there for us for the past two weeks, lighting candles and praying. I think it’s a boost to the community as well to see him home because they see that people might not die from this,” Julie said.

As their ordeal comes to a positive outcome, the Bradley family have called on others to adhere to guidelines and prevent the spread of coronavirus.

Julie said: “Poor daddy, we don’t know where he picked it up. But we can all do what we can to stop this.

“Seeing what it has done to him, a good fit and healthy man, we are trying to tell people to stay away from each other. It’s only for the short term and it will pass.”