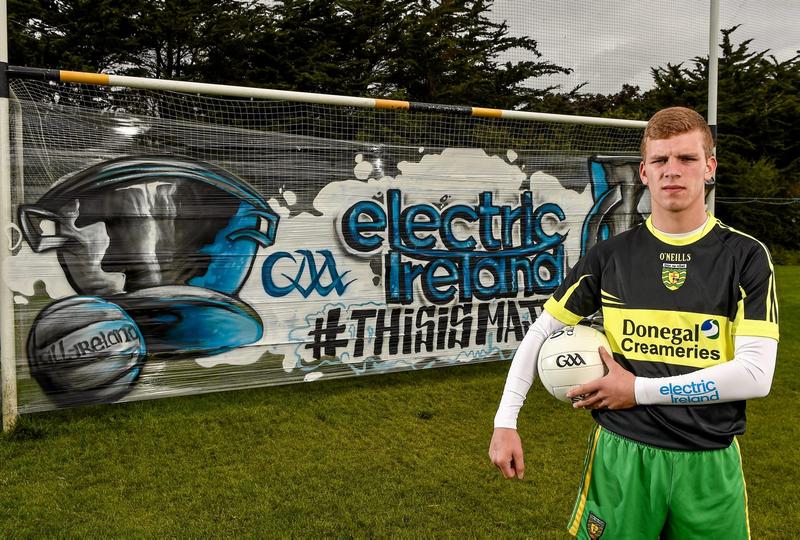 Niall Harley: From dangers of Cape Town to Croke Park – and leaving it all behind

HE DOESN’T remember much about the moment, other than that it clearly was time to leave.

Niall Harley was 11 when his family decided to up sticks and relocate to Ireland.

The Harleys lived in Melmsbury in the Western Cape province, around 60km north of Cape Town.

“When I was growing up, hijackings and robberies were just regular things,” Harley – who made some history as Donegal’s minor captain in 2014 – tells Donegal Daily/Donegal Sport Hub.

“I had a great time in South Africa playing rugby, the weather was great and I was always outside doing something.

“We lived just outside Cape Town and it just became too dangerous.

“Our home was broken into and we got robbed. That happened to everyone. It just happened. After a few times, mum and dad just went: ‘This is no place to raise children’.

“I don’t remember much. It happened during the night when I was asleep. But there was a big thing the next day.  I came back from school and the forensics team had been in the house.”

His father, Kevin, hails from Drimarone and his mother is South African. They met in London and moved to South Africa, where Niall was born in 1996.

He says: “That was the first time we saw the whole family again. It was a lovely time. My parents and brother were in England at the time so they’d see each other regular, but it was nice for everyone to get back to South Africa again. We just made a decision to meet up as a whole family.” 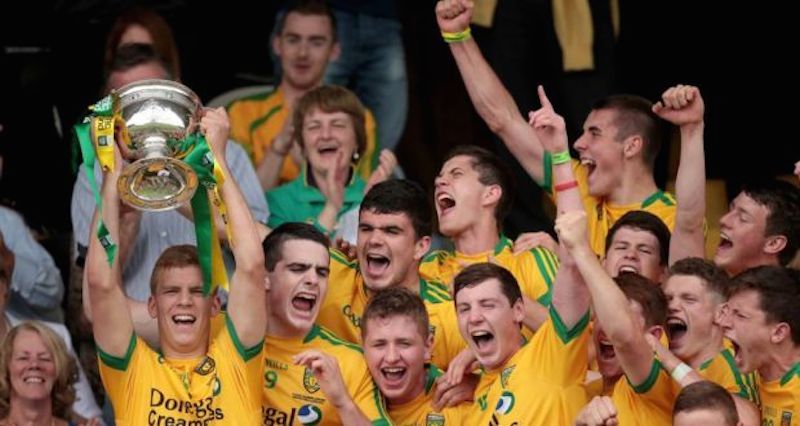 BY THAT stage, Harley was living in New Zealand.

He’s living now in Mount Maunganui, where he’s running a brewery and in a relationship with a girlfriend, Briar Meikle,

The couple spent some time last year traveling around Europe before settling back to New Zealand in September.

Sport has firmly taken a back seat for Harley.

“I’m playing nothing really, bar a bit of cross fit,” he says. “I do miss it.  I would like to start a GAA club here. There is a club in Auckland and one in Wellington, but there just would be no way I could travel there to play. If I thought there was enough interest here, I’d give it a go in starting up. I’ve thought about going back to rugby again, but everything is off now with the lockdown anyway.”

His Gaelic football career pretty much stopped after the 2014 All-Ireland minor final defeat by Kerry.

Harley was the captain of that team – the first from Donegal to reach an All-Ireland minor final – and he flitted around with the under-21s. The heart had gone out of it, though.

“I was finished with it,” he says. “I just couldn’t be bothered with all the effort. I wanted to go traveling. I came to New Zealand in 2016 and I’ve loved it.

“I tried out for the under-21s and was there for a while before I got cut.

“I pretty much lost interest….well, it wasn’t only losing interest, there were bigger things I wanted to do. I wanted to get out of Ireland and see the world. I came to New Zealand with six friends from Ballyshannon. We stayed here for a fews months. They left again, but I stayed on.

“It’s hard sometimes being away from home, but I love it here.

“I do miss the playing and the atmosphere. I miss it quite a bit, but the effort levels are huge at the moment.” 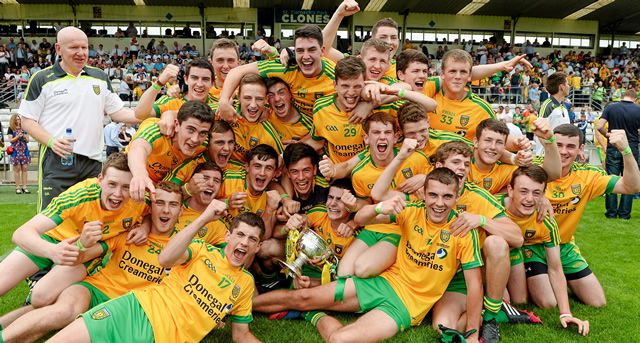 HARLEY briefly played for Melvin Gaels in Kinlough after they came to Ireland.

They soon set up home in Ballyshannon and Aodh Ruadh came calling.

In South Africa, even with strong Donegal blood, Gaelic football wasn’t spoken about.

“I wasn’t aware of Gaelic football and had never watched it,” he says.

“The GAA just wasn’t a thing. It wasn’t big in the family and we never spoke about it. I was playing rugby all the time. I played a lot of rugby in South Africa. I was a full-back or a winger most of the time. I think that helped me when I started playing Gaelic football. I had a base of sports which was good at that stage. The rugby definitely helped with the hand-eye co-ordination and I had that base.

“I still had to play a lot of catch up with the skills of the game and the rules.”

Coached at first by Shane Ward and Gregory Sweeney, Harley took like a duck to water to his new sport. Former Donegal defender Niall McCready, his manger at under-13 level, was another big influence.

Harley was aided, too, by the fact that he was in a strong Aodh Ruadh squad that would challenge all the way up the age groups.

“We won a lot at the club,” Harley says. “I started playing a lot of football when we went to Ballyshannon. I got really into it. I played a bit of hurling too, but I gave up on it after a couple of years.

“I had real enjoyment for football and Aodh Ruadh were unreal. They were excellent for me when I was being brought into the club. I learned the ins and outs, the basics, for the little while I was with Melvin Gaels and I got big into it then in Ballyshahnnon.

“We won a few county titles at underage and we went to the Feile too. We had a great team every year and it was rare if a season went by with us not winning something.”

Bonner was looking after Donegal’s Under-16s for the Buncrana Cup that year, 2012, and earmarked Harley as a possibility.

“He was big, strong and athletic,” Bonner says. “He has the appearance of a really good athlete. He was a great addition to that squad.”

Bonner’s Donegal won the Buncrana Cup, with Harley appearing as a sub in the final win over Tyrone.

The following year, Harley was captain when Donegal won the Jim McGuigan Cup, the Under-17 version.

“It was pretty much the same in the minors. A few of us had a chance and I had my day. Then come the Championship, the day of the first game Declan just announced that I would be the captain. I’m not sure what was in his head, but he just announced it. I was delighted, but it definitely took me off guard. I was shock and I couldn’t believe it, but it was a proud moment.”

Bonner was building serious foundations at the time with several of that squad having now graduated to the senior ranks. The likes of Eoghan Ban Gallagher, Jamie Brennan, Caolan McGonagle and  Stephen McMenamin are among those.

It was Harley, though, who Bonner turned to lead the group.

“You look at a lot of things when you’re looking for a leader. Apart from how he spoke within the group, Niall was a really good trainer. Boys looked up to him. He worked hard and trained hard. He just had the instinct of a leader about him.” 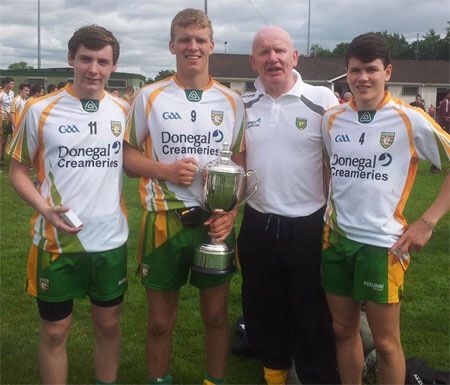 Niall Harley with Jamie Brennan, Declan Bonner and Colm Kelly after winning the Jim McGuigan (U17) Cup in 2013

IN July 2014, Harley followed an elite list of men when he captain the Donegal minors to Ulster glory.

Jamie Brennan and John Campbell hit the goals for a 2-12 to 0-10 win over Armagh in Clones. By the time Harley was heading up to receive the Fr Murray Cup, St Tiernach’s Park was a heaving blanket of green and gold, Donegal’s fans cramming in for the senior decider against Monaghan – which Jim McGuinness’s men won.

“That was just unbelievable,” he says.

“It was just class to lift a trophy in front of about 30,000 people. It was a real highlight. That was an amazing time. It was a surreal day.

“To be in that position and get a chance to lift a trophy in front of so many supporters, it’s hard to explain.”

“We knew it wasn’t a thing for Donegal minors to get too far, he says.

“The semi-final win over Dublin was unforgettable and the seniors winning that day just put the icing on the cake. It was amazing.

“It was a tough game and it was touch and go for a while, but we pulled through.

“We played Dublin early on that year in a challenge and were only beaten by two or three points. That said to us that we were capable of competing. We knew that we had what it took to beat Dublin.

“Declan bred winning into us. He had us from under-16 right through to minors and a lot of the boys are still there now at seniors.

“Declan put it into our heads: ’This will be a winning team’. You went into games and every man just had the belief. We knew where we could go and knew we could compete at the highest level.”

Harley still has the Donegal jerseys he wore on the big days as prized possessions in New Zealand. 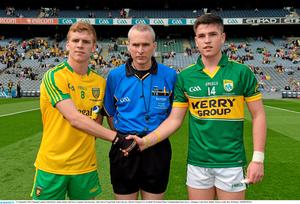 HE keeps a close eye on Donegal, his former team-mates and Bonner. It comes as no surprise that Bonner has managed to guide Donegal to back-to-back Ulster titles.

He says: “I try to watch games as much as possible, but the time difference makes it difficult.

“Declan is a brilliant manager. I really enjoyed playing for him. He knew what he was on about. Declan won an All-Ireland himself so he had the experience. His leadership was probably his biggest strength – when he spoke, everyone listened. Everything was super professional that year of the minors. We had a dietician and a sports psychologist in the group. Declan left no stone unturned.”

The natives at times find it hard to comprehend that he once played in an 82,000-capacity stadium, captaining his team.

“There aren’t many stadiums in New Zealand or back in South Africa that would hold that many people,” he says.

“I tell people about it in New Zealand and they’re shocked. A lot of people don’t get how boys can play in front of 82,000 people and be amateur. You have boys hare with the All Blacks on huge salaries. It’s hard to comprehend it.

“It was just unreal leading Donegal out at Croke Park. In the end, we lost, but it was still a great journey for Donegal. It gave young lads hope and made them see that the ability was there.

“The family back in South Africa used to keep a lose handle on it too. They’d read away and share things on Facebook.

“I’m privileged to have experienced such  an amazing time. I’m one of the lucky ones.”