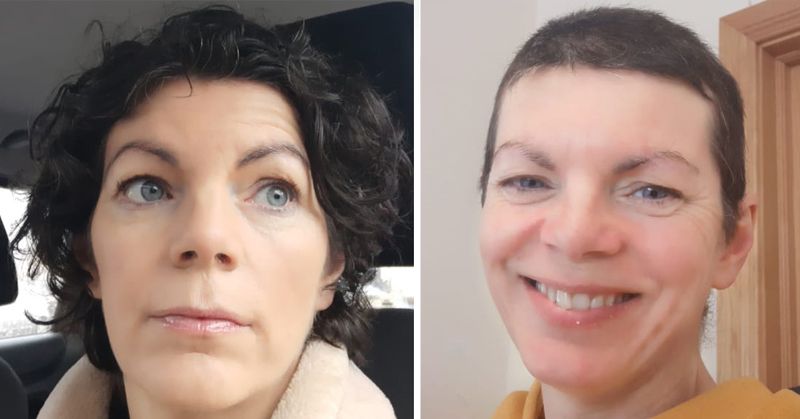 A daring Donegal woman has shaved her head at home to raise funds for two vital causes during Covid-19.

And perhaps the most courageous part was that she let her husband do it!

Nuala took on this challenge for the ‘Frontline Faceshields’ fund and for Safe Ireland, supporting victims of domestic abuse.

The mum of three set the goal last Wednesday after hearing about the local volunteers who have made an incredible 2,000 face-shields to protect frontline medics against Covid-19. She was also moved by an advert for domestic violence supports, and thought she would combine the two causes into one event.

There was no going back after she announced her headshave on Facebook. Friends and family donated to the charities throughout the week ahead of her hair-razing broadcast.

“When you’re at home and you can’t help, this is my way of doing something,” Nuala told DonegalWoman.ie.

Nuala’s new look is a major change, as the last time she had short hair was her Confirmation!

“I had really long hair for over thirty years. I cut it up a bit at Christmas but we went for the full cut last night,” she said.

Nuala is keen to downplay any bravery associated with her challenge.

“This isn’t affecting my life having short hair for a few weeks. It’s the people who donate that are the real helpers. People have been very good and the donations were coming in at a steady pace.”

While Nuala won’t be able to know how much her challenge raised, it is hoped that it was a good boost for both causes.

Almost 2,000 people have so far tuned in to watch the live head shave.

Nuala’s supportive husband Conor did the honours as her home hairdresser – and clearly enjoyed getting into character!

All the while, Nuala said was keeping frontline staff to the forefront of her mind, particularly her late aunt Kathleen. A Donegal native based in Liverpool, Kathleen was a nurse all her life.

“Even when she was meant to be retired she still worked. She is one of those people who I think would be out on the frontline now if she could. I kept thinking about her during it all last night,” Nuala said.

Although she couldn’t bear to look at the finished result in the livestream, she is pleased with the look and more importantly pleased with the outcome – inspiring donations to the causes that need urgent support.

You can still donate via the links below:

Sum of money taken in burglary at...

Threat of local lockdowns will loom for...