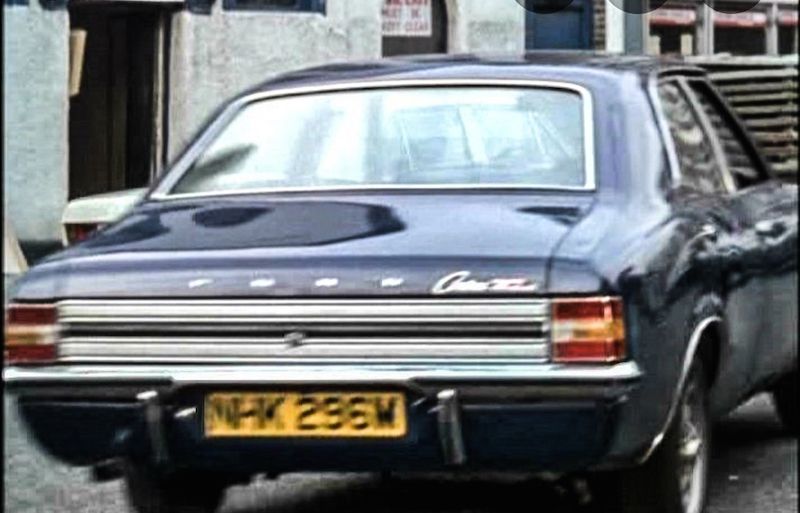 I lost a Mk 3 Ford Cortina in the early hours of Monday morning.

Searched from where I had thought I had parked it the night before, but no luck. It was parked in the High Road area of Letterkenny near the government offices.

I was sure it was going to show up, so much so that I didn’t think I needed to report the incident to the guards.

As it turned out, I awoke to find it was only a dream, but still was wondering where the Mk 3 was, then this turned out to be also included in the dream. In fact, this was the longest part, that of me awake still looking for the car I was dreaming of.

When I eventually awoke I was quite exhausted, I had spent the whole night dreaming I was awake looking for a missing Mk3.

A Mk 3 in hot pursuit

I spent a good bit of the morning after the night before revisiting this dream which like all detailed dreams seemed to move very fast from my memory. Was it a symptom of “driving withdrawal”, could there be such a thing?

When you drive every day, you knock up mile after mile in a familiar environment that has a steering wheel in it looking out at your world through the windscreen of your car.

Waving to friends our giving the horn a toot, or ignoring aggression, competing or giving way, all a reflection of how you are in yourself sometimes.

And why was it a Mk 3? Maybe because that was a car that I once shared in a three way arrangement between my younger brother and my father. A car that was kindly loaned to us after my young brother wrote off our car, a Hillman Avenger.

What a very standard MK 3 Ford Cortina left the factory like.

That Mk3 regularly went missing. “My night for the car” had a lot of different interpretations of the rules between two young lads growing up. This also had to be fitted around the car being free for my father to go to work in and have it on hand to go to mass at the weekend.

A bypass of the rules was available for any of the two of us boys who would walk down from Glencar and collect the car from Nellie’s pub at the weekend, which had only one condition attached – that daddy was lifted from the pub whenever he was ready.

That old Mk 3 Cortina started off life as beige according to its Dublin registered (XIK) tax book but was resprayed midnight blue before it became our family runabout.

I found out this colour change when I cleaned the passenger wing off it, showing off, of course, hitting the old Dry Arch bridge and had to colour match by it looks the second-hand wing we replaced and repainted it, all before the deadline of evening mass!

School of driving and life

My father didn’t mind us doing up the car as long as we didn’t overdo it.

“I don’t want to be going in the ESB gates on Monday morning looking like Starsky and Hutch,!”

So, within reason, the old chrome grille was painted over with matt black, two flat back spotlights fitted and the old hub cap wheels swapped for GL wheels, the old fashion two-spoke steering wheel changed for a sporty three-spoke, and a smart but small pinstripe made this like the top of the range GLX.

At a glance, it looked not unlike the one that appeared from time to time in The Sweeney on TV in the hands of flying squad team of Jack Regan (John Thaw) and George Carter (Denis Waterman). Sometimes a MK3 even appeared in the hands of the baddies in one of the many car chases.

Back in the real world our Mk 3 also had to do the odd disappearing act very quickly especially if the boys in blue done a u-turn and took an interest in it. Then, on a good day, it transformed into the car I eventually managed to pass my driving test in, third time lucky.

For me, behind the wheel is where I do the most thinking, a spin away was a way to recharge my batteries or even can reboot the overloaded computer that is your mind.

A treasure island of sorts a place for adventures, a place to hide when you’re not ready for the world, a place to chat, a place to cry, to break up, to make up, of times that you really didn’t think weren’t the best of times, but looking back the were the best times of all.

That old fashion steering wheel on the Old Mk 3 , the first up grade for any car fan

And after all these years some things never change. I went from sharing the family car that was old Mk3 on the road of the past, now just a dream to the present day of sharing my son’s Spotify account now on the broadband highway of a difference but still finding some of the old signpost to the same old locations.

Like the Eagles that I knew off by heart doing car karaoke before it was invented from a cassette player blasting through a pair back window speakers of the MK3 to today through a set of earphones, nothing changes.

Desperado,
oh, you ain’t gettin’ no younger
Your pain and your hunger,
they’re drivin’ you home
And freedom, oh freedom,
well that’s just some people talkin’
Your prison is walking
through this world all alone