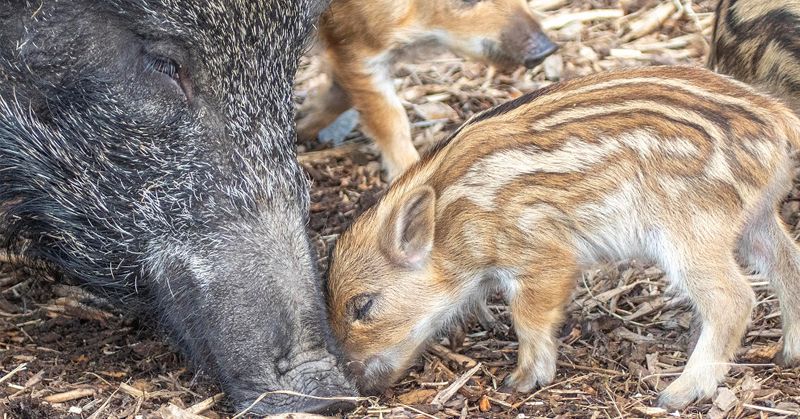 written by Rachel McLaughlin May 1, 2020

Donegal’s Wild Ireland sanctuary has welcomed the arrival of six adorable baby boars as a ‘glimmer of hope’ during Covid-19.

The boarlets were born on Friday last week, and there’s ‘snout’ much cuter than their humbug-patterned coats.

Their mother, named Tory, didn’t want to hog too much attention prior to the birth. She only let sanctuary staff know that she was pregnant over two weeks ago.

Wild Ireland, which rescues and rehomes animals that were once native to Ireland, gave Tory a home in January. She was a surplus in a zoo, and her former keepers warned that she had been in male company before the move.

“When we got her the caveat was that she had been with a male so the chances were that she might be pregnant,” Wild Ireland owner Killian Mc Laughlin told Donegal Daily.

“She came to us on her own, which is not ideal because boar are very social animals. It’s nice now we’ll have our very own sounder (family of boars) at Wild Ireland.

“We don’t encourage breeding here because then we’ll be looking for homes for our own animals, but in the circumstances we are delighted she has her own little family.”

Killian and the three wolves at Wild Ireland. Northwest Newspix

Wild Boar are generally pregnant for approximately three months, three weeks and three days before giving birth. The Wild Ireland keepers had a date in mind if Tory was in fact pregnant, but they couldn’t be sure if they would be adding to their growing numbers until the last minute.

“Wild animals are very good at concealing the fact that they are pregnant,” Killian said.

“Last week she started to show signs, she got a little bit tubby, her belly started to drop down and she built this most impressive big nest.

“We were all waiting with bated breath until that morning. It was pretty incredible,” Killian said.

One of the six Boarlets born at Wild Ireland with his mum Tory. (North West Newspix)

The six little boarlets are being well protected by mum at the moment, and their sweet striped ‘humbug’ look helps them hide in their shelter.

“This is camouflage for them in the forest,” Killian explained. “They never stray far from mum but they run around from day one, so if mum is off foraging it’s important they have camouflage.”

Wild Ireland will soon be asking the public for help in naming the newcomers. All the sanctuary’s residents, including the brown bears, wolves and the lynx, have Irish names. The boarlets will be named after islands of Ireland, just like mum is named after Tory Island off the coast of Donegal.

One of the six boarlets born at Wild Ireland. (North West Newspix)

Fans of the sanctuary are eager to come and see the sounder, and Killian is hopeful that the easing of Covid-19 restrictions may soon allow visits to the 23-acre park again.

Wild Ireland, which opened for the first time last October, has faced huge challenges since it closed in March.

“We now have no income but we have all the same outgoings. The staff are still looking after the animals and we are still buying in the food. They all get fresh fruit and veg from the wholesalers, not supermarket leftovers, it has to be fresh for their nutrition,” Killian said.

“It’s not easy but I’ve tried to move online to try and generate some income.”

Wild Ireland is now selling teddies of their most popular residents online as well as flexitickets for use anytime this year.

“I want to thank everyone that has donated, it is very kind of them,” Killian said.

“I’m hopeful that when the restrictions start to relax that we will be one of the first places that is allowed to open. Because we are outdoors, we can practice social distancing really easily because the park is big.

“It’s disappointing this happened in our first summer because a lot of people were putting off visits until the good weather. We had such a horrible winter with the storms so it’s been really bad luck.”

Killian and the staff are also self-isolating because they cannot risk getting sick and being unable to care for the animals. But the diverse residents of Wild Ireland, and the new arrivals, have been keeping their spirits up.

“It’s easy to keep going because of the animals, keeping them healthy and well looked after is a nice distraction from all the doom and gloom.

“The birth of the boars is a glimmer of hope amongst everything else. It’s given us all a lift.”

No ‘boar-dom’ as Wild Ireland celebrates new arrivals was last modified: May 4th, 2020 by Rachel McLaughlin