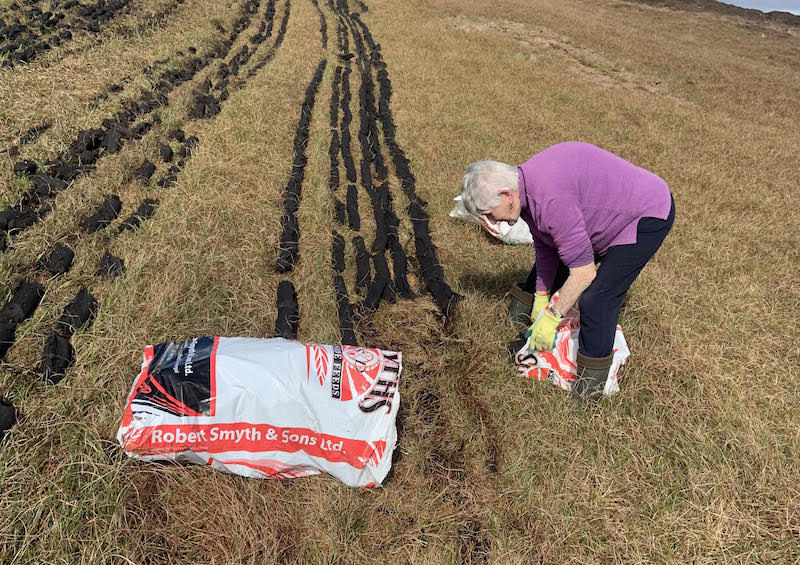 A 92-year-old Donegal woman has proven she’s made of ‘turf’ stuff after insisting on spending her birthday in the bog!

Bella Gallagher was happy to have a birthday celebration with cake and balloons.

But only after the mother-of-two and grandmother of six from Rathneeny Barr in Laghey footed row after row of turf.

Bella, who is originally from Pettigo, loves nothing more than hopping on the back of a quad or trailer, and helping out in the bog.

The 92-year-old, who husband Sonny passed away some years ago, has more energy than most young people and loves helping out.

Her daughter-in-law Ann says she loves life and it’s impossible to keep her down.

“She’s just a great woman but I really don’t know where she gets the energy from.

“Last year we were coming back from the bog and she insisted on sitting on the back of the trailer. The trailer tipped and she ended up under all the bags of turf.

“We all thought the worst but she just got up laughing her head off,” recalled Ann.

During the Covid crisis, Bella is missing her sisters Mary, aged 88, and Maggie, aged 90, who both still live in Pettigo.

“She really misses calling to Pettigo to see them but she’ll get over to see them when all this is over,” added Ann.

Bella has a rest in the turf trailer on the way home from the bog!