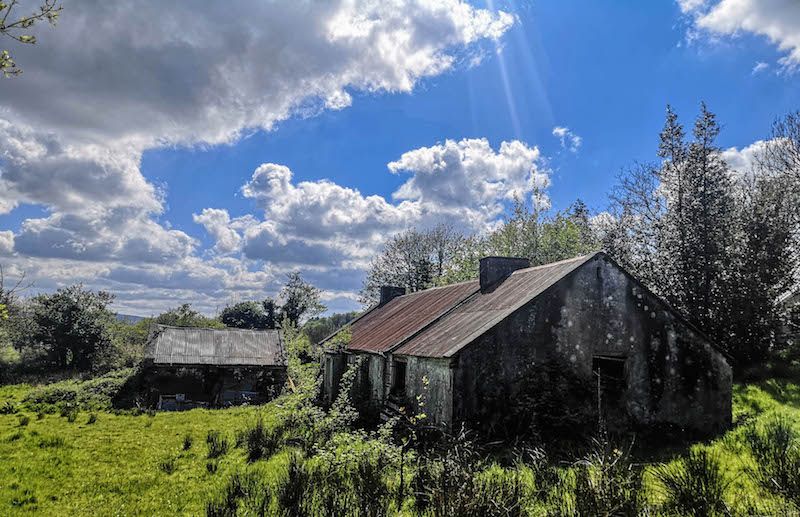 Two white butterflies fluttered their way down the old lane in front of me, as if to guide me down the road to the past.

It was only then that I knew I was in the right place, in both location and time.

Walking along this old laneway, and seeing houses dotted along the skyline reminds me that the years have passed, but the only sound here today is that of a fast passing bumblebee, of birds singing in the rushes or along the ditch.

The sun is burning my arms and I could be easily 7 or 8 years old again on a childhood journey, the only thing I’m missing is the old buttermilk can!

Earlier this week I stood at a wooden pole sunk diagonally across the path on the Glencar side where the old footbridge once stood. It also marks the very edge of the town on the other side of the stream where time has stood still. Nothing has changed here in years.

Through the hedge somewhere behind me, I can hear the rattle of a Husqvarna cutting the grass on someones’ front lawn in the rows of new houses. But the view of the flat field on the other side of the stream holds the key to the past. Summer days haven’t changed here, the sound of the stream is still the same. There is an echo in here when all the trees get all their leaves at this time of year, Birch, Hazel Hawthorn to name a few, all in abundance down here near the riverbank.

No school and no mass, imagine that? A wish come true for many a young lad like me growing up years ago. The downside of that was missing out on a “Holy Day Breakfast” as we called it.

I wasn’t the greatest fan of going to mass at the best of times growing up. On holy days off school, our Auntie B would have breakfast ready for us if we called down to her house after we went to mass, most days we only went down for the breakfast and winged the mass.

Four of us got our story right at the top of the Back Road before we faced the music, BAD idea, bad, bad idea! You could easily put a ‘L’ on to the end of my Auntie B’s name as in Barrister of Law on the days that we try to sell this tall tail.

Auntie B would wait at her kitchen door for us to appear down the back road and would know by the sheepish look that outweighed the look of hunger for the breakfast. She knew long before we lifted the latch of the back gate that we never darken the door of St. Eunan’s Cathedral. But she would say her bit and that would be that.

A young Brian heading for buttermilk as a child from Glencar to Kirkstown.

From missing mass to adventures on my summer holidays as a child, my father sent me for buttermilk over to Kirkstown from Glencar over the fields.

Now here’s me crossing Rodgers Burn on official duty going for buttermilk and it was okay. Me with an old sweetie gallon tin that my father located somewhere in his travels. Over the gate, the late Leo Cullen’s house took you down along the back gardens into a big field, a field that always had a crop of some sort in it, from spuds to barley to just grass for hay, there the land just dropped into the valley until you arrived at Rodgers Burn.

There is something very special about this field you ended up on the Kirkstown when you crossed the Burn, so near to the town and yet so far away. It was a historic field with a mass rock where mass was celebrated in secret in penal times You mind does a lot of thinking in places like that.

On the left-hand side of the east-facing alter, a path is cut into the banking which takes you up to a higher level to a field on the Kirkstown side of the burn.

A butterfly leading the way up the lane yesterday evening welcoming me on a journey down memory lane. Photo Brian McDaid.

I often wondered if it was on this side of the river that the first of the sentry were on look-out which could receive a signal from the highest part at the top of College Farm Road down to what is locally known as Sentry Hill beside the girls school to keep a lookout for the soldiers that would come out from Letterkenny to the stop the illegal celebration of the Catholic Mass at that time.

Moving on the Long Lane would take you out onto the Kirkstown then head up the hill until you find the left turn onto Mullen’s Lane. Parts of the old wooden churn would be all washed down and sitting on the window sill drying and Lizzie would be there waiting for your arrival, she would take my tin and remove the lid and stick her nose in to make sure it was washed out well before she would fill it with a gallon of buttermilk.

50p was the arranged price for buttermilk but Lizzie would always look at the money and say, “you have far too much there son” so she would give me change and would always say there you are, and there something for yourself to get something when you get back into the town.

We were always told that if someone gave you money to refuse it once by saying ‘Ah no thanks’ and then pause and then say ‘Thank you’ and to never look at the amount they gave you in their presence.

On the way home out the laneway and out of sight on the farmhouse you would take a look to see how much change you got. It was always the same amount back, 25p change and it was always two 10p coins and a 5p coin in new money which was five shillings in old money.
So a Gallon of buttermilk from Mullens cost 25p, plus a lot of goodwill.

The walk home was over the old lane and a stop in the mass rock was always enjoyable even though the milk seemed to get heavier the longer the journey took, going through the chapel field I was happy to take a wee break from the journey and marvel of what it would have look like with loads of people in for mass.

A view into the Mass Rock Field with Rodgers burn in foreground. Photo Brian McDaid

People who were told they couldn’t go to mass and not like us who were told to go to mass and wouldn’t! After the mass rock a treat on award day was to force open the lid with one of the coins and enjoying a wee drink of fresh buttermilk in the middle of the field not forgetting to wipe away the tell-tale white moustache after.

The milk had to be home in time for my father’s arrival from work and the old cream Stanley range fired up to make scone bread. That old buttermilk tasted a lot different to the buttermilk of today and any that was left over from baking was always lovely with poundies and butter.

In this lockdown time, I retraced my journey to Kirkstown that I made a half a century ago. The old homestead is still there as it was in my childhood even the old trees at the bottom of the lane that I turn over to head for Rodgers Burn are still blowing in the wind, trees as a child that gave me a feeling that I had travelled this road before, of saying one of the few prayers that I know at the mass rock and thinking about the words on the way home.

Give us this day
Our daily bread
And forgive those
Who trespass against us.

The old laneway hasn’t changed but the skyline of Glencar now looks different in the distance. Photo Brian McDaid.

Lizzie never said much all them years ago, but I always had that Deja Vu feeling walking those lanes. In later years I only put two and two together that Lizzie’s mother Sissie and my granny Bridget were sisters, and my journey out to the country from a completely different direction from Glencar had the same destination of those generations of my family before me had made, up to Mullen’s farm to visit and to get eggs milk and butter.

Lizzy had two brothers, Charlie and Paddy, who worked with horses ploughing the land before the arrival of motorised tractors.

Lizzy lived in the Church Lane and went out to the family farm to carry on the tradition of making butter. Even as a child I thought that seeing butter being made and carting buttermilk home across fields would soon come to the end of an era.

Lizzie Mullen with my aunt B, at the back with Neil Mullen, front are three sister, Annie Murray, Sissie Mullen and Bridget Coyle (My Granny) pictured at the shop at the foot of the Back Rd.

Looking back you could look at the time as being idyllic but it was far from that.

Things were hard and times were different as my childhood photo painfully reminds me but kind and holy people like Lizzie and Auntie B just made things that bit better.