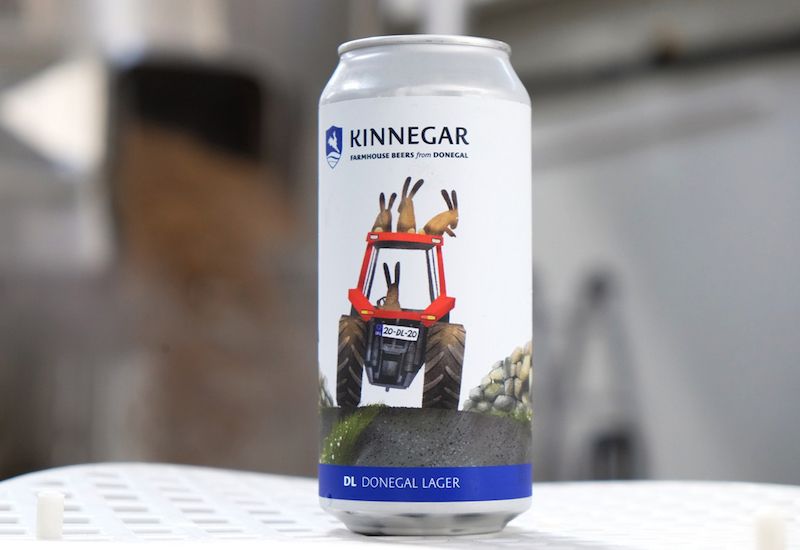 Donegal in a can – local brewery launches new DL lager

A new drink from the Kinnegar brewery has tongues wagging and hopefully many the thirst quenched in the weeks, months and years ahead.

The new brew was originally conceived by the brewery’s Seán McCarthy as a quality local draught product for a series of Donegal’s leading pubs.

But how times have changed. The prospect of a freshly poured pint of any beer now seems like a distant dream.

Not easily deterred, Seán switched course to Plan B.

He points out that “this lager lends itself supremely to cans. It’s the very embodiment of a ‘crushable’ beer. We always intended to can it eventually for the rest of the country and beyond — that time is now!”

“Kinnegar has a wonderfully loyal following in its native county”, observes Seán, “and we’re hoping to build on that with a beer that should have a broad popular appeal”.

The Letterkenny brewery’s flagship pale ale, Limeburner, is a lager in everything but name but, as Seán explains “it still has a tad too much flavour for a lot of traditional lager drinkers. The new lager hits a lighter note that should be accessible to everyone.”

“We can see that there’s a big move towards people buying Irish products in the context of the pandemic” says Kinnegar co-owner Libby Carton. “That can only be good. If there’s a silver lining to be found in the crisis, it’s the push small Irish producers might get from people turning towards local businesses and local products”.

DL’s engaging label leaves no doubt about this particular lager’s heritage. If that’s not reason enough for many a Donegal person to give it a try, there’s another very good one.

“We’d like to do our bit for the community in these difficult times”, explains Kinnegar co-owner Rick LeVert. “At the beginning of the crisis the hospital asked if we could make hand sanitiser and we had to explain that, unlike distilleries, breweries aren’t able to produce strong enough alcohol for that purpose.”

But it set the brewery crew’s minds to thinking how they could make a contribution. ”€5 from every case of the first batch of DL will be donated to the Donegal Hospice. If the canning run goes smoothly and we get a reasonable yield, that could amount to about €1400.”

“Now we just need people to buy and enjoy the beer!” laughs Seán.

Donegal in a can – local brewery launches new DL lager was last modified: May 8th, 2020 by Staff Writer