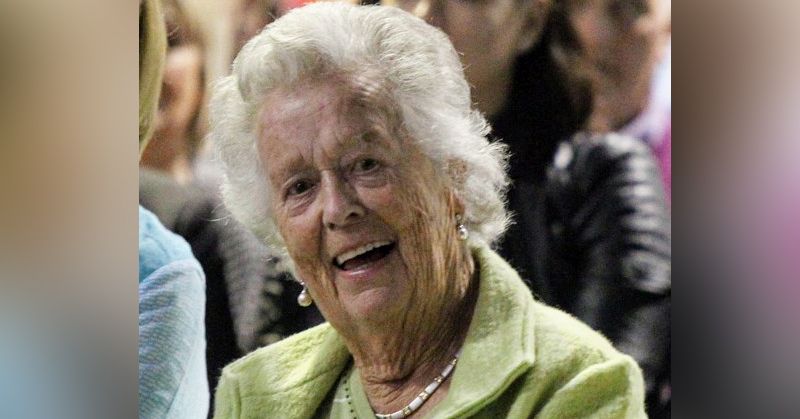 The death has been announced of well known and popular Letterkenny lady Muriel Kelly.

Mrs Kelly (née McGinley), of College Farm Road, passed away on Thursday, peacefully after a long illness, in the loving care of the staff at Larissa Lodge Nursing Home.

Mrs Kelly passed away one day after her 92nd birthday.

Described as one of Letterkenny’s great townspeople, Mrs Kelly was a former radiographer in the X-ray department of Letterkenny General Hospital.

She was a daughter of the late surgeon, GP and former TD. Dr. JP McGinley and is predeceased by her late husband Charlie Kelly of Charles Kelly’s Mills.

Mrs Kelly has been remembered as a very positive person and a great conversationalist to know. Even as her health started to face, she remained very positive and celebrated her milestone 90th birthday with her extended family at her home at College Farm Rd just a few years ago.

The late Muriel Kelly celebrated her 90th birthday with her extended family pictured at her home on College Farm Rd. Photo Brian McDaid

In compliance with current Government and HSE guidelines, Mrs Kelly’s Wake, Funeral and Burial will be strictly private to immediate family only.

The obituary notice on RIP.ie states:

The funeral Mass can be viewed from the St. Eunan’s Cathedral Letterkenny online streaming service at 1pm on Saturday 9th May 2020 by using the following link https://www.churchservices.tv/letterkenny.

No flowers please. Donations, in lieu, to the local Vincent De Paul Society.

Great sadness at passing of well-known Letterkenny lady was last modified: May 8th, 2020 by Staff Writer