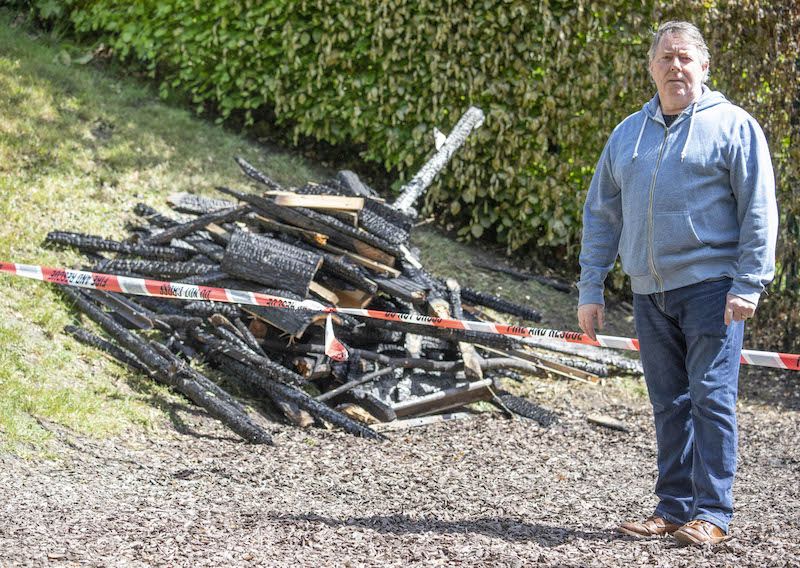 A Letterkenny councillor has expressed his fury at vandals who set fire to a children’s adventure playground.

The thugs set fire to the playground at the Bernard McGlinchey Town Park last night.

A number of units of the local fire service and Gardai rushed to the scene after plumes of black smoke was spotted by locals.

Fire service personnel managed to put out the fire but not before thousands of euro of damage was caused.

A slide and other equipment was completely destroyed in the attack.

Gardai were today (Sunday) carrying out a full forensic examination of the scene.

However, a Garda spokesperson said the fire was deliberate.

The remnants of the perimeter of a wooden play area at Letterkenny Park with was destroyed by fire surveyed by Colr. Gerry McMonagle. (North West Newspix)

“It has all the hallmarks of a deliberate attack. We are carrying out a full investigation into the incident which happened around 9pm,” said the spokesperson.

The playground and park, which is close to hundreds of residential homes, is a popular attraction of children.

Local county councillor Gerry McMonagle said he is fuming at the attack especially as it comes at such a time when children are so vulnerable.

He said he is hopeful that Gardai can now identify the culprits on the park’s CCTV system.

He said “I can’t tell you how annoyed I am at this. Why would anybody do something like this to a playground?

“And especially at this time. The park is a mecca for children and families at the moment because of the good weather we’ve had and the need for children to get out and get some exercise.

“Then these people come along and deliberately attack it. I really can’t understand their minds.

“Hopefully they can be identified on the CCTV system in the park and brought to justice,” he said.

Councillor’s fury at vandals who set playground alight was last modified: May 10th, 2020 by Staff Writer