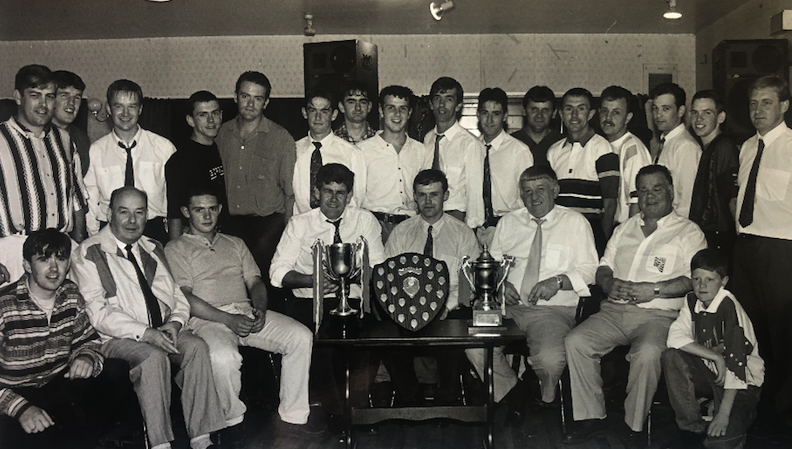 25 years on: When Drumoghill Celtic brought home the bacon

written by Chris McNulty May 12, 2020
FacebookTweetLinkedInPrint

IT WAS in the Letterkenny Bacon Factory where Danny McConnell first outlined his ambition.

McConnell had taken over as manager Drumoghill Celtic, a modest Donegal League club whose pitch is perhaps one of the best known in the county, given its location along the N14 Lifford-Letterkenny road.

Even playing in the Premier Division would’ve been a pipe dream in those days in the early-mid 80s.

McConnell, though, informed work colleagues that he intended to a bring a Premier Division title to The Moss. Those around him laughed, but McConnell had a vision he intended to bring to reality.

Twenty-five years ago today, on May 12, 1995, Drumoghill Celtic defeated Ardara Town 5-2 at The Moss and were crowned champions of the Premier Division. 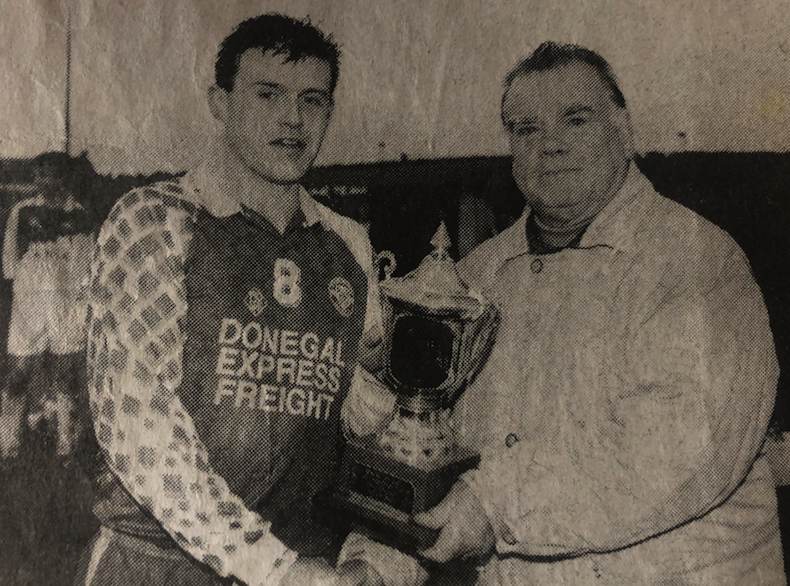 MCCONNELL first had the reigns for an end-of-season Cup game, a 1-0 defeat to Keadue Rovers at Central Park in the 1983 season.

In ’82, alongside the likes of Tommy Doherty, Sean Dolan and Shaun ‘Swan’ O’Donnell, McConnell had helped structure the club’s schoolboys set-up. Doherty would remain his right-hand man for the duration of his involvement until the mid-90s.

There had been something of an internal wrangle when the decision was made, in 1984, to take Drumoghill Celtic – as they had become around 1980 having previously played under the banner of St Columba’s – to the Derry and District League.

“One of the reasons was good pitches,” McConnell says.

“The facilities in Donegal weren’t great at the time. They were poor to be honest. I learned a lot about how football should be played and about coaching.

“There was none of that in Donegal in those days.”

Coaches like Sean Davis among others arrived to The Moss on occasion to conduct sessions with the budding footballers of the day.

“I was actually an Area Rep on the League and, after we went to the D&D, I turned up to a meeting, but I was asked not to come back.” 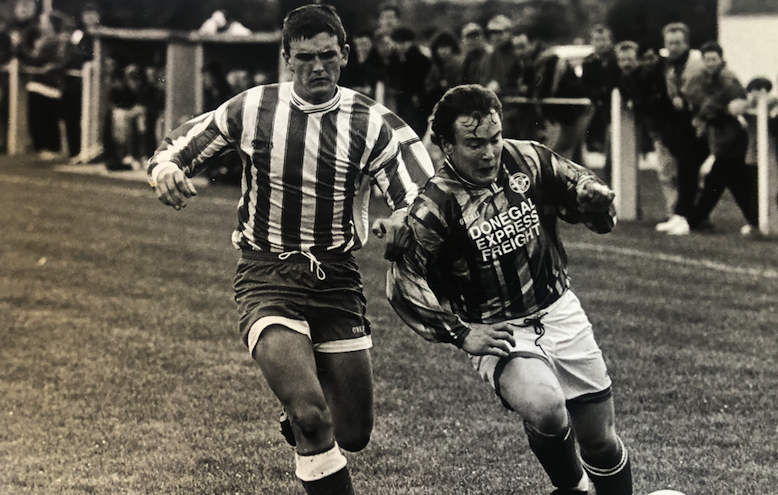 Mickey Rodgers in action in the Sportsmans Cup final in 1995

DRUMOGHILL also competed in the Winter League, a precursor to what is now the Donegal Saturday League.
For four seasons, Drumoghill competed in the D&D and were fairly successful.

“We did four seasons in the D&D, but once the novelty wore off the players started to miss the local game, the derbies and the banter,” McConnell says.

“We started off in there in the fourth division, but we won promotion twice in the first three years.”

Drumoghill actually won the Third Division and they spent two seasons in the Second Division.

In 1988, they returned to the ranks of the Donegal League, but they had to go through the wringer; their acceptance was decided on a split vote, the local administrators still carrying ill feeling from what they had viewed as a defection.

McConnell says: “We then put our second string into the D&D when we got into the Donegal League.

“We didn’t know the opposition in Derry. Now, we were out playing the likes of Kildrum Tigers, Lagan Harps, neighbouring clubs and there’d be plenty of slagging in The Grill after the games.

“The D&D was a real learning curve for me and Tommy Doherty. We gained so much experience and knowledge.” 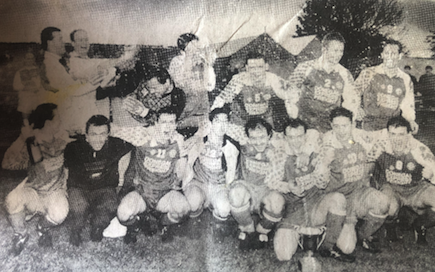 THE impact was instant, but yet it was certainly swift.

Drumoghill finished third in Division Three in their maiden season back in the Donegal League in 1988/89.

The following season they were Division Three champions.

In 1990/91, they were third in Division One, the season the Donegal League restructured and the top flight became the ‘Premier Division’.

The acquisition of striker Paddy Ward from Oxford United for a Summer Cup campaign proved instrumental. Ward would remain at the club under McConnell’s tenure and spurred a glorious period.

Crucially, though, Drumoghill also won promotion that season to the Premier Division.

“Getting into the Premier Division was the big one,” McConnell says.

“I had said to people in the Bacon Factory that my aim was winning the Premier Division and they laughed.”

During the first D&D years, McConnell, as well as managing Drumoghill played for CYMS, Letterkenny Rovers and Kildrum Tigers, with the 10.30am kick-off times in Derry enabling him to double-job.

They’d begun to get a reputation as a team with an eye for a player.

In those D&D campaigns, the likes of Con McLaughlin and George Grier dinned their colours at the end of the League of Ireland season. Indeed, Paul Hegarty played a full season at Drumoghill before Derry City snapped up his services.

“The Premier Division was always my goal,” McConnell says.

The signs were promising now. In the 1992/93 season, their first in the top flight, Drumoghill finished in fifth and they were third the following season.

McConnell says: “We couldn’t beat the smaller teams that 1993/94 season. Drumkeen won the League…we played them three times, beating them twice and drawing once.”

In 1993/94, managed by McConnell, Drumoghill won the Saturday League and Downtown Cup double.

They were ready for their greatest hour. 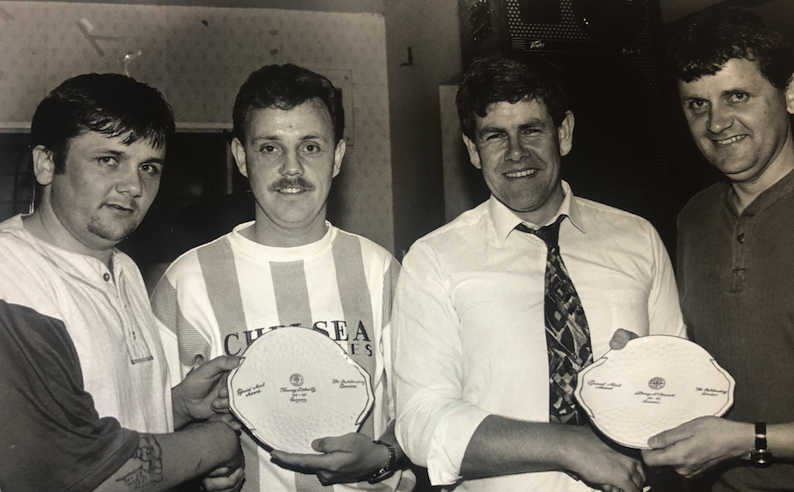 DRUMOGHILL began the 1994/95 season by winning the Area Shield of the Sportsmans Cup.

A 4-1 win at Bonagee – and goals from Marty McGarrigle, Paul Lynch, Michael Rodgers and Declan O’Donnell – opened up the season.

In the Area final, Marty Doherty. Rodgers and Julian Steele gave them a 3-0 win over Lagan Harps.

The challenge was stunted somewhat with a 2-1 defeat by Keadue and a 1-1 stalemate at Lifford Celtic.

However by the time Drumoghill went to the Greenbrae in March to win 3-2, their eyes were firmly fixed on the title.

“That result in Lifford was massive for us,” McConnell says. “ We were 2-2 at half-time and Mickey Morning got the winner in the second half.”

Morning, along with the likes of Paul Lynch, Michael Lynch and Jason Gibson – now manager of USL side Bonagee United – were young, emerging, locals in the squad.

Barry Porter had arrived from Finn Harps Reserves and the captain, Michael McGinty, had also been at Finn Park.

McConnell had moulded an experienced panel that was led by the prowess of Doherty and Ward in attack. Between them in the 1994/95 season, they netted 57 times.

Drumoghill were rocked by a controversial 2-1 defeat in the Ulster Cup by Glengad United, who were at the base of the Inishowen League at the time with Drumoghill riding high in the Donegal League.

Ward netted twice for a 2-1 League win over Kildrum and the title talk began to swell.

Ward also netted a penalty to earn a 1-1 draw against Keadue and now the maths were simple – beat Ardara and the title was Drumoghill’s.

A BACKLOGGED game against Ardara was the stage for Drumoghill on a fine May evening in 1995.

Ward was absent from the game as Drumoghill headed for the big night.

McConnell says: “I was nervous before the game. You just didn’t know what Ardara would come with.”

However, Jason Conroy brought the pot to the boil when he pulled a goal back for Ardara.

Barry Porter spurned a penalty and the nerves jangled further.

However, Porter thumbed home a third before Michael Rodgers added another to seal the deal. For good measure, Mickey Forde’s first goal of the season put the cherry on top.

McConnell says: “It was what I had always wanted to do and we done it.”

In their final League game of the season, a 5-2 win over Gweedore, McConnell scored himself, as did goalkeeper Charlie McCahill, from a penalty. 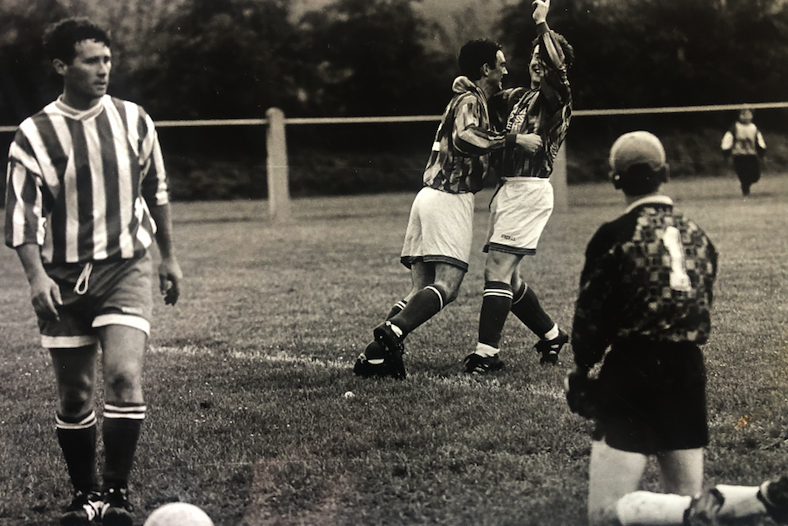 Mickey Rodgers celebrates a goal in the Sportsmans Cup final

THERE was still another prize to play for as Drumoghill reached the final of the Sportsmans Cup.

Keadue Rovers were in wait.

In a dramatic game at the Diamond Park – when both teams wore Drumoghill kits due to a colour clash – Barry Porter scored in a 1-1 draw.

The replay was more dramatic, still. Michael Rodgers netted twice in a 2-2 draw and penalties were needed to determine a winner.

Rodgers missed in the shoot-out. Declan O’Donnell, Martin Doherty and Charlie McCahill all found the net and it was poised on a knife edge when defender Evan Logan made the long walk.

McConnell was later named as the Donegal Parian China Manager of the Year and Drumoghill headed for the Ulster Senior League, where they would win the League Cup in the 1999/00 season, having lost a League Cup decider in 1995/96.

Drumoghill’s title triumph in 1995 stood the test of time until they repeated the deal in 2016, under the management of Michael Lynch, who was among the victors 25 years ago.