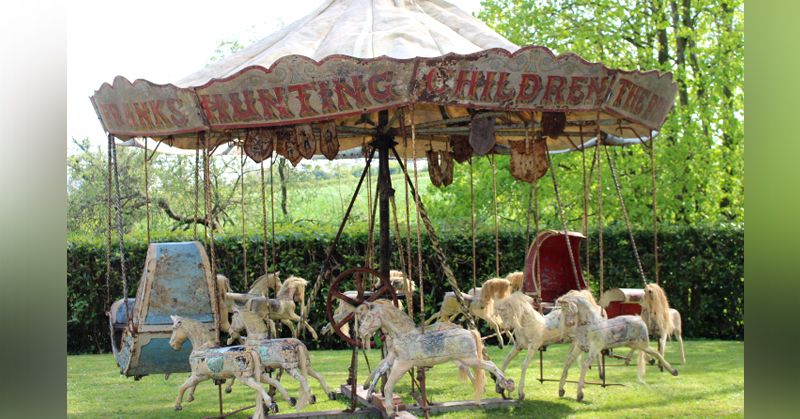 Rare carousel from Donegal could fetch up to €20,000 at auction

A rare 19th century carousel from a Donegal fairground is expected to fetch between €10,000 and €20,000 at auction this month.

This beautiful decorative carousel was once owned by the Farrells, a carnival family of Buncrana. It will be sold in full working order this month at a Victor Mee Auction of the full collection of distinguished second-generation antique dealer Gerard Derry, owner of Derry’s Ltd.

It is said to be an extremely rare find, as many carousels alike would have been broken up or still retained by carnival families.

The machine is adorned with eighteen hand carved and painted horses and two swing boats. This type of carousel dates back to the 1940s, where it would have been enjoyed by many before electrical carousels came into operation.

Estimated to sell at auction between €10,000 and €20,000, this lot is expected to take centre stage in the May sale of Gerard Derry’s Retirement Auction. Mr Derry’s full collection will be auctioned in sales over two weekends, beginning at 2pm on 23rd – 24th May and 6th – 7th June, with the first weekend showcasing Derry’s decorative Interiors & garden pieces and the second giving way to his architectural, pub fittings and advertising memorabilia.

Due to Covid-19 restrictions, sales will operate online only and no in-house viewing will be available.

Rare carousel from Donegal could fetch up to €20,000 at auction was last modified: May 12th, 2020 by Rachel McLaughlin