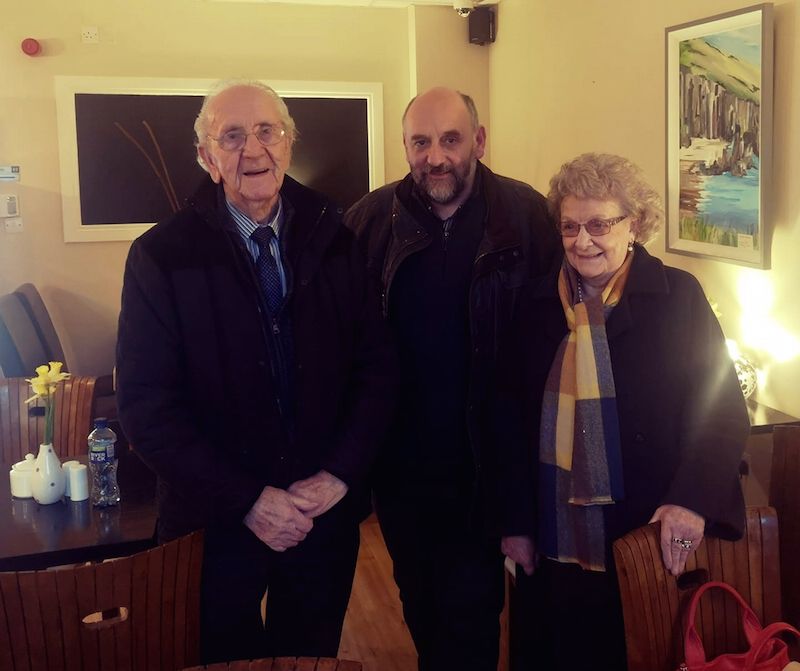 Three young brothers working in a field alongside the Letterkenny to Derry Road.

The youngest would lift his head to listen to a sound in the distance, then he would call out ‘BSA, or Morris or Ford’ and wait to the motorised vehicle would come into sight.

He was always right, he knew every car motorbike truck or bus by the sound of its engine, and as it would head out of sight and it was a local motor he could even tell you who was driving it by the gear change or even in some cases a missed gear change going into the nearby hill.

When electricity first came to his own townland as a teenager the youngest boy in the house wired his parents home himself.

A road sign on the way up to Drumoghil where the late Hughie McDaid along with his brothers and sister walked to school every day. Photo Brian McDaid.

He then got an electrician to go over his work before the ESB inspected it before they connected up to the power.

When the ESB man arrived and put in the main fuse, he said, “Mrs McDaid, that’s a very tidy bit of workmanship but I see one small problem, the switch for the kitchen light for some reason was fitted upside down.”

Her youngest who was standing back listening, stepped forward to the door into the bedroom and switched the kitchen light off and politely said to the ESB man “try that upside down switch now.”

Hughie McDaid in his youth in Rossbracken

A two-way switch in a house now is the norm but in those days it was a luxury.

That bit of extra attention to detail was to become a trademark of a young Hughie McDaid.

These are just two of the stories that my late father would often tell about his young brother Hughie growing up in Rossbracken many years ago.

Called after his mother’s father Hugh O’Donnell, Bridget McDaid chose well when she decided to call her youngest son Hugh.

Because a christian name pattern was to repeat its self when a good-looking young Hughie met the equally attractive Hannah McBrearty and started walking out together.

They then became man and wife, Bridget McDaid would often say to the young couple starting out on their own life, “My mother and fathers names were Hugh and Hannah, now my son and daughter-in- law’s names are also Hugh and Hannah.”

Those values of past, present and future were passed on to a very able and mature young man who carried them with the deepest of pride all of his life.

Even though we have been trying to prepare for this day for the last year since Hughie received his news, the head of our family slipped far too quickly out of this world at the weekend.

In death and in the present climate we didn’t get half the chance to meet the people that Hughie knew through his lifetime and wanted to express their grief and respect. In the same way that Hughie and Hannah did to comfort people in times of grief.

A star in the making

There was many a story shared over the phone lines this week following the death of Hughie.

One that sums up just how unusual Hughie’s calls of duty were, came from Rory Kennedy. Now one of the top rally navigators in Ireland, he admitted he may have cracked a few eggs on his career road to success, the very first of these happened before a young Rory Kennedy even got on to the road!

A young St. Eunan’s College student was learning to drive his father’s new car up and down the driveway of his home in Glencar. Kennedy was going well and getting more confident with every run in his father’s new Hilman Hunter. He decided to go for second gear going down the short driveway and ended up ploughing into the gatepost bringing the car to and abrupt halt before going to the main road. The normally quiet and reserved Jim Kennedy had a few choice words for his son before saying “We need to get Hughie” as he finally calmed down.

On a Saturday morning an oil lorry was rolled out of the workshop and a sorry looking Hillman limped in over the pit boards at The Donegal Oil Company on the Port Rd.

Rory remembers watching and helping Hughie as he removed the bumper headlight and grill and straightened out the damaged wing, front panel and a head light that was pointed up to the sky.

A fine layer of filler applied before Hughie and Rory walked up to O’Boyce’s Cafe for a cup of tea to let the Isopon set. Then it was back to sand and shape the panels followed by a layer of undercoat before matching up the paint in the final coat Hughie even made his own bracket for the bumper which he straighten it out leaving the car like new. As Hughie was putting the pit boards back in place the soon to become famous navigator asked Hughie “Will I back her out?” to which Hughie gave a laugh, and replied, “Nah Sur, not today, Rory, we have no filler left!”

The news of the death of Hughie McDaid, 8 McNeely Villas, Old Town, Letterkenny was received with great sadness at the weekend.

A native of Rossbracken his passing signalled the end of his generation of the McDaid family. Predeceased by his father Paddy who worked as a foreman for the Donegal County Council on the roads, his mother Bridget, (nee O’Donnell, his brothers Pat and Fred who worked for Lough Swilly Busses and the ESB respectively, his sisters Nora and Jennie (McLaughlin) who both worked in the old Hosiery Factory and in the Letterkenny General Hospital.

Hughie was also predeceased by his granddaughter Aoife in 2009 who the family thought the absolute world of and miss so much.

Hughie spent most of his working life with the Donegal Oil Company where he was transport manager looking after the fleet of oil lorries.

Hughie at the wheel of the newest fleet of oil lorries at Donegal Oil Company. Photo By Steven Sheridan.

Hughie started in the motor trade as a mechanic serving his time in Mc Clean & McLaughlin’s garage on the Port Road in Letterkenny.

In his later years Hughie was better known as a taxi driver and one of the founder members of Swilly Cabs.

Hughie was a mine of information about any subject from mechanics of any sort to family connections. He was a joy to share a conversation with in good times and a comforting voice in bad times, always there to support in the background, the greatest person to tell a yarn and share a laugh with.

Hughie will be sadly missed by the extended McDaid and McBrearty family and especially missed by his children, Pauric, and Sean, (Letterkenny) daughter Sharon, Gallen in Lifford and Colm in Nottingham and his wife Hannah who with Hughie were one of life’s great teams.

Hughie’s grand Niece Shauna McDaid was the soloist at the service, before his final removal to Leck Cemetery where members of both the McDaid and the McBrearty families flanked the funeral cortege down through Letterkenny Main Street, out through the OldTown where Hughie lived and up to his final resting place at Leck Cemetery.

The old dip rod system that Hughie McDaid designed when his worked in Donegal Oil , still on the wall this week. Photo Brian McDaid.

Our lives are on pause since Hughie passed, even the simplest things remind us of this man. From a dip rods system for the fleet of oil lorries that Hughie designed himself still on the wall of the Donegal Oil Company over a quarter of a century after he retired to a journey out to Drumoghil this week and a simple “school ahead” road sign which now looks completely different to me reminding me of a caring brother, son, husband, father, uncle or just a very good friend on a road that Hughie and his brothers and sisters completed a five mile return journey to school from Rossbracken everyday.

DD Motoring: An ordinary but extraordinary man was last modified: May 14th, 2020 by Brian McDaid