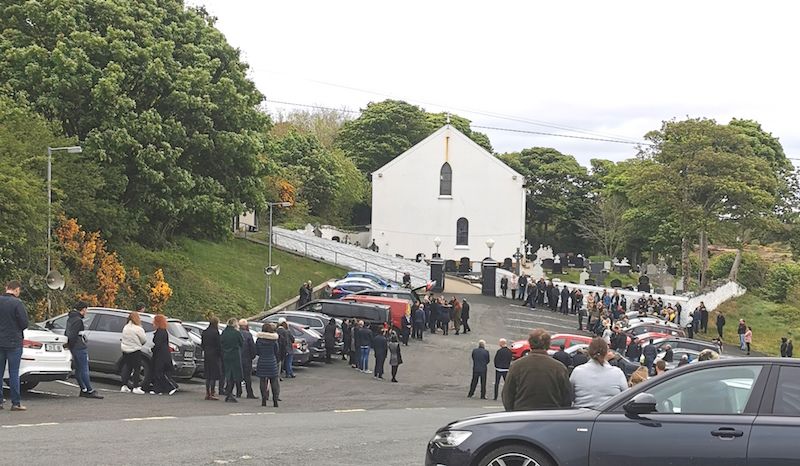 The community of North Inishowen and beyond turned out in their hundreds today to show their support for a family whose 10-year-old daughter was killed in a farm tragedy this week.

Little Louise Colhoun died after she was struck by a tractor on the family farm at Bellaghan, Umgall Bridge, Malin just after 5pm on Wednesday last.

Hundreds of people kept a social distance as they supported the Colhoun and Douglas families as Louise was laid to rest after funeral mass at St Patrick’s Church in Aughaclay today.

Hundreds of others lined the route with heads bowed as Louise’s funeral cortege with her small white coffin left her home and traveled through Malin Town and onto the church.

Louise was one of three children of local farmer, Robert Colhoun and his wife, Sarah Jo, and was a pupil at Urblereagh National School in Malin Head.

Among those in attendance were many members of the Malin GAA Club for which Louise was a proud member of the Under 10 football team.

Members of the club decked in their black and amber colours stood in silence as their friend and team-mate was brought to her final resting place.

Also in attendance was members of the coastguard, the ambulance service, the Gardai and members of Glengad FC.

Principal of Urbleragh National School, Mr Ronan Ruddy, told mourners that parent/teacher meetings with Louise’s parents were a pleasure because teachers only had good things to say about her.

He also spoke of her love of animals and music and how she was such a joyful and happy child and could be seen skipping and dancing around the schoolyard.

Louise was laid to rest in the adjoining cemetery.

Funeral of tragic Louise hears she was a happy child who loved animals was last modified: May 17th, 2020 by Staff Writer