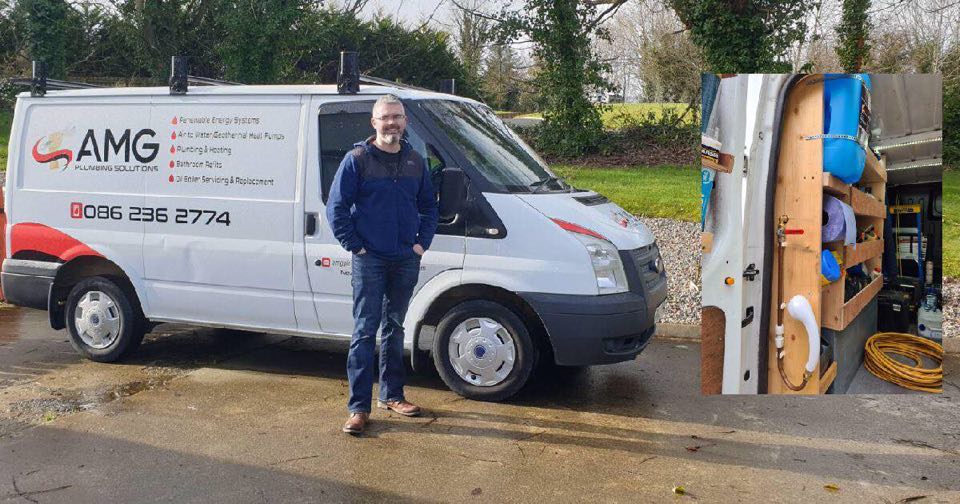 A DONEGAL plumber preparing to get back to work has devised a simple and effective cleaning station inside his van.

Andy McGowan from Newtowncunningham installed the hand-washing and sanitising station inside his Ford Transit.

A 20-litre drum us connected to a shower head with a simple lever to turn it on. The station contains blue roll, a bin and the door of the van is fitted with soap, sanitiser and gloves.

“It cost nothing with all the bits and pieces just lying about the house,” Andy told Donegal Daily.

“It’s just handy for keeping all the stuff together. It makes customers feel a wee bit safer, if they see I’m cleaning my hands before I go in and again on the way out.

“It will make older people especially a wee bit more content. It means I’m not using the houses to do it.”

Andy spent a short time on Saturday morning installing his new station and believes the idea could be used by fellow tradesmen.

He said: “It’s very simple, really, just a 20-litre drum with a couple of connections and I just added a couple of shelves for the blue roll and a holder for the bin.

“It’s just to get me geared up to get going with the work again and this is great for hand-washing on the go.

“It’s definitely something that builders and other tradesmen could use. It’s very straightforward and costs nothing. I put it together while my wife was making a fry!”

Andy’s wife, Amanda, is a carer and he hasn’t been out much during lockdown, but now he’s preparing for an increased work load in the coming weeks.

He said: “I didn’t want to take any chances during the lockdown, but it will start to get busier now again.

“It’d be good to see other workmen install something like this in their vans. You’d wonder how it wasn’t done before. If anyone has any questions, there’s nothing to it, but they can get in touch.”