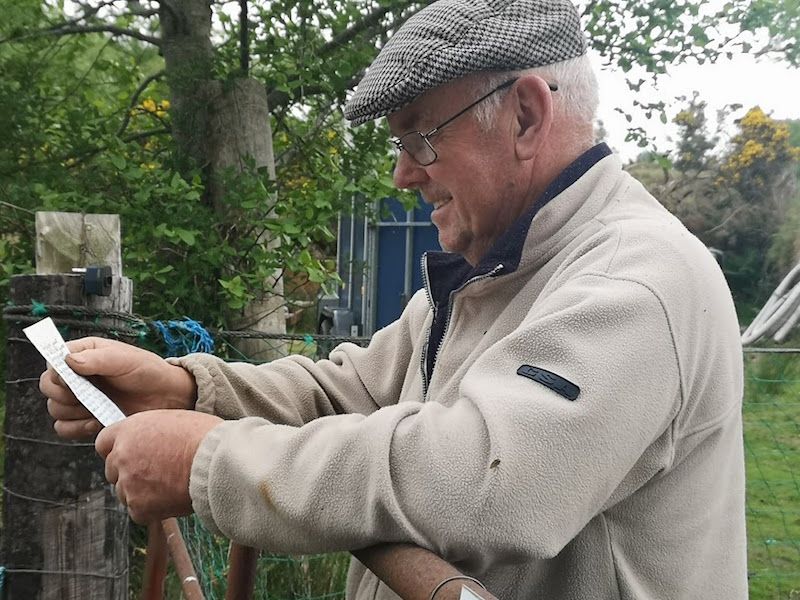 Dear Lizzie, Just a few lines to let you know we got your letter all right, glad to see you are all well, Patrick is very bad with the flu but I think he has the worst of it over him.

Today we have big Neal out, he was here all last week doing everything. We have got the corn all in, all but the old meadow, John and James be up any chance going.

We are drowned with a fog every day you would not see from one field to the other. The corn is all heating in the stacks. Wee Martin had the Flu first, he is better again now, none of the rest of us took it, thank god. You might be over at the end of August, we might get the spuds dug, so Goodbye for the present- From Daddy to Lizzie.

A hand-written letter on a torn out page which could have been written last summer from a father to his daughter. This letter and a few other things were sent to me following an article that I recalled of walking from Glencar to Kirkstown through the fields for buttermilk a few weeks ago.

They were found in an old house in the Church Lane area of Letterkenny. The house, number 2 Church Lane now belongs to Highland Radio presenter, Lee Gooch who is part of the Letterkenny Cathedral Quarter Group who are tastefully bringing the old street houses back to the way they once looked originally.

When we recalled memories a few weeks ago about Lizzie Mullen from Kirkstown and the Church Lane, that was the link for Lee to make the connection with the past.

Elizabeth McGrenra, (Nee Mullen) Known to most as Lizzie, lived in No2 Church Lane with her husband Peter after she returned spending a good bit of her working life in Scotland.

She was the only daughter along with five boys, James, John, Neal, Patrick and Charlie they were the children of Neal and Sissie Mullen, all of these two generations of the Mullen family have all now passed away, Lizzie the last in 2006.

Lizzie received this letter to her home in Scotland at 15 Livingstone St, Clydebank, the date she received it is unknown but it was before 1966, that was when her father Neal passed away.

The letter was possibly written after 1961 the year her mother Sissie passed away, who would have written letters to Lizzie in Scotland regularly.

A letter from Neal Mullen to his daughter Lizzie in Scotland which was found in an old house which is undergoing refurbishment in Letterkenny Photo Brian McDaid.

The letter is a reply to a letter Lizzie sent home to a farmhouse that she grew up in, In it she learns her brother “Patrick has the flu” and her other three brothers, Big Neal, who lived up in Ard O’Donnell, John who lived in Swilly View Terrace at the foot of the town and James who lived in Ballymacool Estate were all up on the family farm helping out. The corn is in, and the old meadow is still to do, Wee Martin got the blame for taking the flu into the house.

This week we made the journey across Rodgers Burn to Kirkstown taking this beautiful letter from the past between a father and daughter home for the first time, a keepsake that Lizzie held onto all her life.

We were lucky enough to find and meet “Wee Martin” described in the letter, a grandson who still is living in Kirkstown. Passing the old derelict house where the letter was sent from and on up the laneway to Wee Martin’s home, high on the hillside.

Martin recognised the paper on which the letter was written even before he got his glasses out of his pocket, “Everything was written on them wee pages, pulled from a red covered cash type book,” he recalled.

Then starting to read the letter Martin whispered “Dear Lizzie” to himself as he looked down through the letter. “You Know I wrote a few of these letters for my grandad when I was a boy. My grandad would sit up at the fire, light up his pipe and get a notebook down and ask me to write a letter to Lizzie. He would sit there talking and I would try and keep up with him with the pen” Martin recalled as he flipped the single page over to read the end of the letter on the back.

Lizzie Mullen with my aunt B, at the back with her father Neil , front are three sister, Annie Murray, Sissie (Mary Ellen) Mullen and Bridget Coyle (My Granny) pictured at the shop at the foot of the Back Rd.

Looking down in the direction of the old home house Martin recalled, “It was a busy house down there back then, Comiskey’s travelling shop would call in the middle of the week, they would buy all the butter we could make, our butter had a wee swan and three wee signets pattern imprinted on the top of it.

“We would put it up in round-shaped half-pound measures wrapped in grease paper. They also bought all our eggs too, they also delivered our “day old chicks” from Elm Bank where the TSB bank is now at Upper Main St. You could hear the noise of the day old chicks in the back of the travelling shop when the van landed into the street. On a good day, Granny would have money to get back when she would have her week’s shopping done balanced out on against the butter and eggs and buttermilk bill”.

Martin’s granny was Sissie Mullen she was the oldest girl in the Doherty family that lived in the outer Gate-lodge in the Ballymacool Estate in the Boyds time. Neal Mullen was the oldest in his family too, when they got married they emigrated to Scotland for a while but Neal’s father James asked Neal to come home to help on the farm.

The derelict farm as it looks today in Kirkstown . Photo Brian McDaid.

Neal was a much sought after ploughman who had a great way with a team of working horses, he was very quiet in his nature and Martin thought his grandfather was the nicest person to be in the company of.

They both would sit on a big stone near the front of the house in the late summer evenings and look across the hills to the other side of Letterkenny and Neal could tell you who was growing what in every field and when it was ready for harvesting.

Martin Mullen was only a schoolboy back then but his grandfather would have long conversations with him as if he was an adult. Martin knew more about Kirkstown and the countryside than he knew about Letterkenny where his home was in Ard O’Donnell.

When Lizzie came home from Scotland, her and Paddy and wee Martin were the last to make butter at the old home house in the 70s and early 80’s. Lizzie a great ballad singer would sing the whole way through the long process of churning milk to make butter.

Lizzie Mullen behind the man with the dicky-bow at a Christmas party in Scotland.

As Martin read on down through the letter he saw his own name, “Wee Martin” described by his late grandfather who got the flu first, it was then Martin figured that his grandfather Neal wrote this letter to his daughter in Scotland.

Lizzie kept just the one letter, maybe it was the only letter her father wrote himself after his wife Sissie passed away. Maybe it was his way of talking about all his family at home was his way of saying he was missing his daughter over the sea in Scotland.

Lizzie came into this world in 1918 the year that the Spanish Flu devastated the world. The family that were together through the world wars working the best way they could in the fields, all done the old way with horses. One other legal document that Lizzie had would suggest that her father was missing his childhood sweetheart Sissie who he shared over 50 years of marriage and teamwork of the farm with started to prepare to join his late wife eight weeks after her death when he was to make his last will in the Summer of 1961.

Leaving Martin Mullen’s home this week, Martin went up to his shed and loaded a half a dozen of free-range eggs into an egg carton and handed me two duck eggs as well. “Try them” he said. Going down the driveway in my van I though the eggs had rolled off the passenger’s seat as I passed the old home house looking over I found them, they rolled in beside Lizzie’s letter.

Duck Eggs from Mullen’s farm rolled in beside Lizzie Old letter from her father in Kirkstown. Photo Brian McDaid.

For me, my family connection with the Mullens was through Sissie Mullen whose maiden name was Mary Ellen Doherty. She was my granny’s Bridgid Coyle’s older sister. When my mother was born Bridgid called her daughter after her sister Mary Ellen. I feel very lucky that this letter to Lizzie from her father found me and with the help of Sissie and Neal Mullen’s grandchildren for their help this week in describing their grandparents uncles and aunt, and the vital link from to Lee Gouch for preserving a great memory of the late Lizzie Mullen.

The butter was salted and was beautiful with scone bread. Enjoyed on days measured out by the big angelus bells chiming in Letterkenny, at midday and six in the evening the sound of which would travel from St. Eunan’s Cathedral to the hillside on Kirkstown.

Wee Martin following in his grandfather’s footsteps in the love of working with horses. Photo Brian McDaid.

A (sort of) Motoring Column: From Daddy to Lizzie was last modified: May 21st, 2020 by Brian McDaid