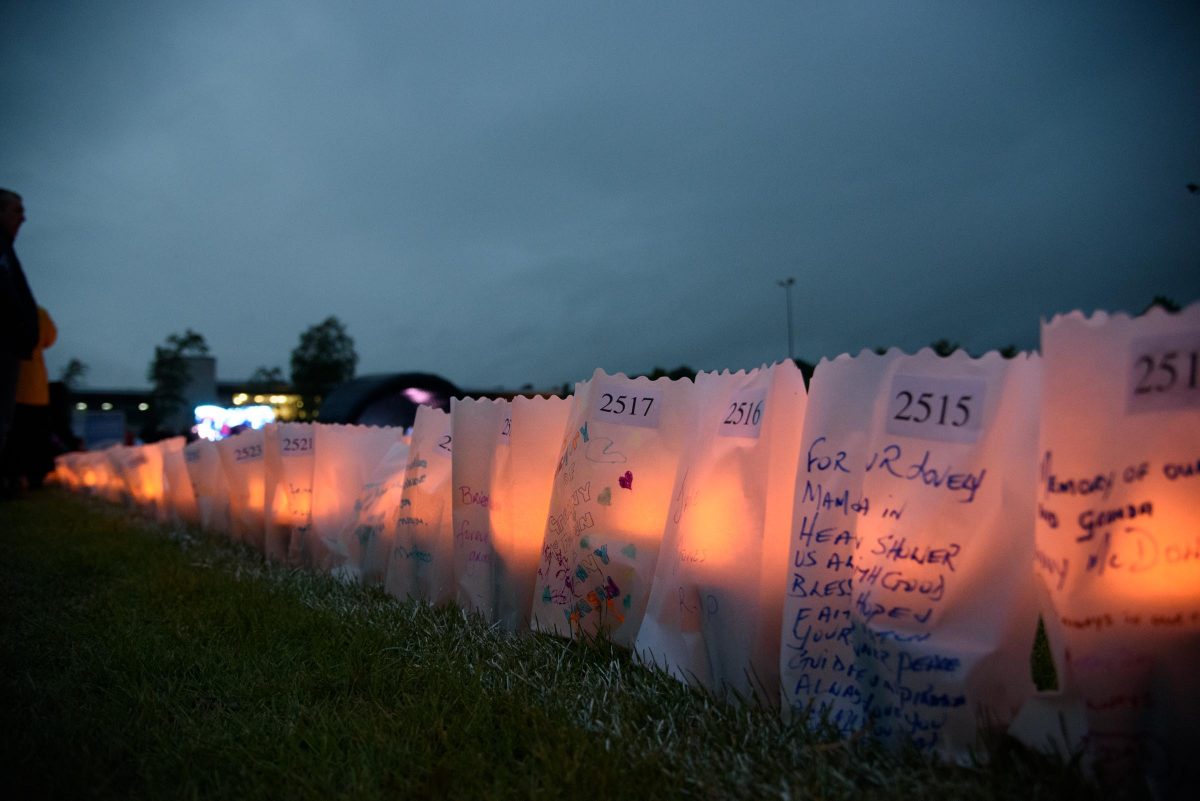 It may have been that the campus at the Letterkenny Institute of Technology lay deserted on Saturday night and through to Sunday evening when in normal circumstances it would have been humming with the sights and sounds of Relay for Life Donegal.

But in these far from normal circumstances, the organising committee conceived a way of ensuring that the spirit of the event lived on last weekend through an online presentation and recordings of former Relays.

There were up to 4,200 views of the Luminaria ceremony hosted on the committee’s Facebook page – a telling pronouncement of what the overall event means to so many.

“We can’t be together. Instead we are in our homes or other essential locations because of something that we did not know existed until a few months ago,” Donal Kavanagh proclaims in his introduction to the virtual Luminaria ceremony.

A ceremony, he says, that resonates even more now during “these strange times”.

The field at the LYIT campus empty, the gazeboes packed away, and the patrons finding themselves apart.

Unable to walk together but at least in a position to gather online, united by one word, a word that previously society had been afraid to utter. “We have no such hang-ups now.”

As the images of past Relays continue to flicker, so, too, do the hundreds of candles lighting up the dusk and darkness. Each one of the candles signifying those lives that have been touched by cancer.

Many of them were with them on Saturday even if not in a physical sense but, as Donal points out, there were sadly those who were not and would never be again.

He spoke of the international element to Relay for Life and their friends in the United States, Belgium and other countries who had been part of previous events in Donegal and were, he envisaged, accessing this year’s event through Facebook.

As the “evocative music” of Moya Brennan’s harp echoed from past years, the processions of survivors and carers were relayed on the field of the LYIT.

“We reflect now in our own private space,” Donal quietly narrates.

Meanwhile, the candles shine a light of love. “Some of them dedicated to those with no-one to light a candle for them.”

And helping to light up the ever descending darkness, the words, ‘HOPE’ and ‘CURE’ carried by those involved. The hope for more effective treatment as the research continues – a major project in this respect still in progress at Letterkenny University Hospital – into bringing prevention and recovery.

In the centre of the field, the Lone Table a stark reminder of empty spaces in countless homes.

And, as the narrator indicates, the experience of the coronavirus also reminding them of loss.

The Survivors Choir render their powerful version of ‘Down to the River to Pray’ while Donal reflects on those who have undergone and continue to, the cancer journey. The current crisis would give everyone an even greater appreciation of the country’s frontline workers.

Local Relay for Life patron Daniel O’Donnell’s song ‘I’ll See This Journey Through’, combined with further images of Relayers, helps bring the Lumanaria to a close – virtual through necessity in 2020 but nevertheless offering another compelling reason why the organisation itself exists.

Some of the crowd at the Donegal Relay for Life Luminary Service on a previous year. Photo Clive Wasson

Many home owners placed candles in their windows to help mark the occasion and remember those who had lost the battle.

Sunday morning brought the broadcasting of the 2017 Gospel Hour, presented then on Highland Radio by Aidan Murphy, and the Ecunemical Service – by now firm fixtures on the Relay for Life calendar but obviously bounded by the limits of restrictions imposed this year.

On Sunday evening, courtesy again of Facebook, chairperson O’Connor described how Relay for Life has become a special event to many people. “Now more than ever we wanted to reach out,” he maintained.

He acknowledged all those involved and added a special word of thanks to Daniel O’Donnell who had been “extraordinarily generous” in his commitment to the Relay cause.

Families set up there camdles at the Donegal Relay for Life Luminary Service at a previous event. Photo Clive Wasson

There were also tributes to committee members and to Donal Kavanagh who had scripted and narrated the Luminaria ceremony.

Videos of committee members, profiling why they Relayed, were played and a montage of faces and words echoed the sentiments of the chairperson.

“We wanted to reach out and give hope during these difficult times,” he insisted.

“Stay safe and stay in touch and please God we will see you all in 2021,” he pledged.

Donegal’s Relay for Life – a virtual sell-out! was last modified: May 27th, 2020 by Staff Writer