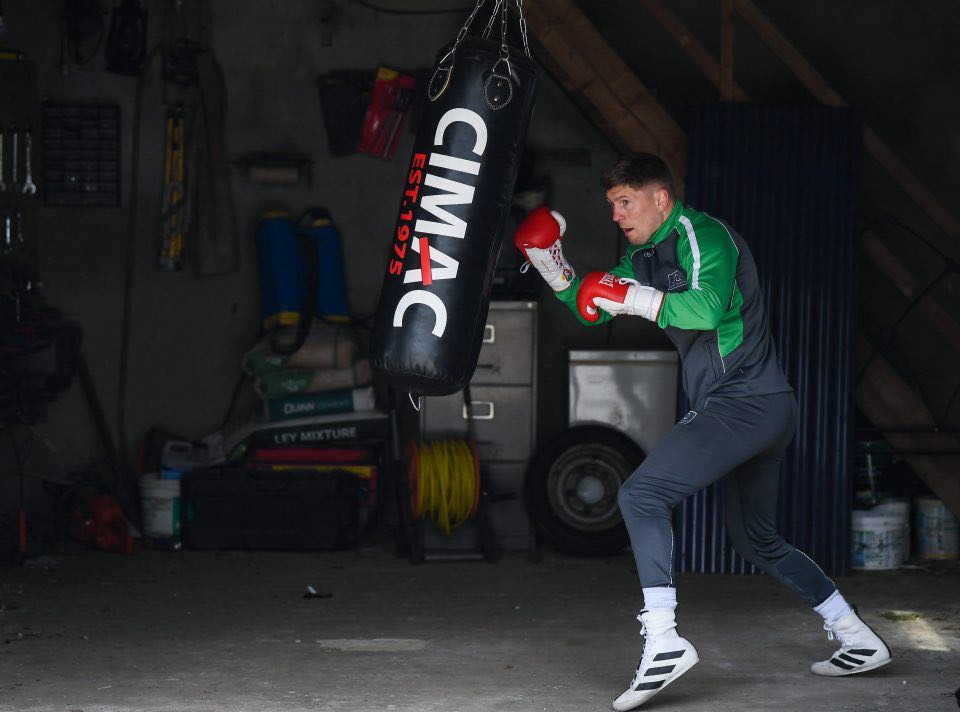 Jason Quigley making the most of home comforts in lockdown

JASON Quigley has been getting a real kick from the sights and sounds of home during lockdown.

The Donegal-based middleweight has, like many professional sportspeople, to learn to adapt and improvise of late.

The surroundings have the basics he needs and home bird Quigley (18-1, 14KOs) is quite content to put the hard yards in on the home turf.

“It’s sort of ‘Rocky’ stuff. I’m doing a lot of 10k and 16k runs – stuff I’d never have done before. I’m training in a garage or training outside. I’m just doing what I can do and trying to make the most of it.

“It doesn’t matter where in the world you are, you can put in the hard work.

“This is the first time that I have had real stability in my career.  Usually, I’m away at training camp, off foreign for boxing, whereas now I’m in the hills in  Donegal training away. I’m not coming home to just an empty house and Netflix on my own. I’m coming back to the people I love and the people I want to be with.”

After a breakout year in 2013, when he won World silver and European gold medals as an amateur, Quigley moved to the bright lights of Los Angeles.

Tinseltown’s novelty wore off and Quigley, during a year out of action due to a hand injury in 2017, linked up with Dominic Ingle in Sheffield. However, as he re-assessed his direction following a first pro loss to Tureano Johnson last July, Quigley returned to Ireland and is coached now by former world middleweight champion Andy Lee.

Quigley feels sort of renewed by a period of reflection during these strange times.

He says: “We don’t need a busy lifestyle to get through life. This lockdown has made everyone pause. If people take the pause right, they’ll see what they enjoyed doing. A lot of things in life took up a lot of time but had no real purpose or value. This shows us that we can sit back, relax and see what we love to do ourselves.

“I’ve had time to pause, to look at my career, look at where I’m going and figuring out how I can be the best that I can be. I’m looking forward to taking that into fights now.”

“At the very start of the lockdown, for the first two weeks, I didn’t do a thing in boxing. I tried my hand at a bit of DIY – some worked and some didn’t! I didn’t do a lot of training.

“I just didn’t want to burn myself out but once I saw a bit of light coming, I started to pick it up and broke myself back in. I’ve kept myself in great shape and I’m actually lighter now than I was before lockdown.”

Quigley had been slated to fight Jack Cullen on the undercard of a bout between Dillian Whyte- Alexander Povetkin for the WBC interim heavyweight belt in March. The card in Manchester, also set to include Katie Taylor’s eagerly-awaited clash with Amanda Serrano, was shelved.

Quigley said: “Of course I was disappointed and annoyed that the fight was cancelled, but there’s nothing anyone can do about it. It’s out of my hands so all I can do is keep working on becoming the best boxer I can be.

“I’ll keep working so that I’ll be ready when things come back. I’m not getting too down or too pissed off. Everyone is in the same position so no-one will have massively progressed. It’s a worldwide problem so there’s no-one out there who is benefitting from it.”

Eddie Hearn has ambitious plans to roll out a series of open air shows from the garden of Matchroom Boxing’s headquarters in Brentwood.

Hearn has already stated his intention for a Quigley-Cullen meeting as part of one of those cards.

And Quigley is eager for the bout to happen. He said: “I really want to fight, whether it’s in my own back garden or in Eddie Hearn’s back garden.

“It would be great to get on a show like that if it happens. It’ll be one of those events people will look back on years down the line. It would be in the history books and it’s something that not many boxers will get a chance to do.”

Jason Quigley making the most of home comforts in lockdown was last modified: June 2nd, 2020 by Chris McNulty