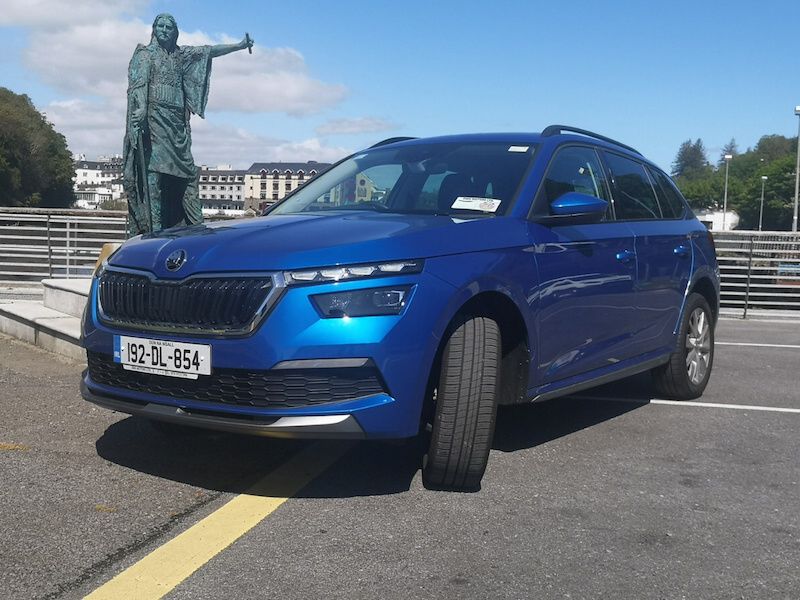 Someone made my motoring column easy for me this week.

They went away and did all the research online on this new Skoda Kamiq, with a view of changing their family car in the near future and asked us to have a wee spin in this car, if we got a chance.

That chance came to pass last week when we were test-driving the Seat Arona at DMG motors for last week’s motoring column.

A family member of mine would always decide if they liked my taste in the latest new car I would test driving by putting their head inside the car and smelling the interior.

If they didn’t like the interior especially a good leather smell it wouldn’t matter how fancy and how many miles to the gallon it did, it wasn’t for this person who suffered from travel sickness.

The smell of the inside of a car was the most important for them to have any chance of enjoyment and by a knock-on effect everyone that travelled in their company!

Call me old fashioned but I’m the same, not about the interior smell but I’m just not able to make a decision on something by looking at it from an image online.

Our Demo Skoda sitting under a matching blue Skoda from the range on the poster at Skoda in Donegal Town. Photo Brian McDaid.

I need to feel it, be it a new coat, a car or even a computer part before buying it.

So this week I was behind the wheel of the latest in crossovers to be added to the crossover range from Skoda.

Crossovers give you the benefits of the comforts to drive of a saloon or hatchback which are great on motorways and long journeys and the versatility and higher viewpoint of the road without going to the extremes of the ruggedness of an off-roader.

The Kamiq may be the smallest in the crossover range but it’s not really that small. It’s built on the same platform as its cousin the VW T-Roc which is the crossover version of the VW Polo. The present-day VW Polo is now far bigger than what is its big sister the VW Golf was when it started out back in the early 1970s.

The Kimaq that we drove came in a beautiful metallic blue, it was their demo model registered at the end of 2019 when this new model made its way on to the Irish market.

Behind the wheel, this model has a feel of quality build to it, nearly more Audi than VW.

A multifunction leather-clad steering wheel just said quality. Even this car sits higher on the road.

The feeling inside the car feels more saloon possibly because of the view out the front to the road ahead over a slightly higher dash (compared to the Arona the Seat version crossover I drove that day).

The other big thing I noticed right away was how much Skoda had muffled the sound of the off-beat three-cylinder engine. It was only when you really pushed this car on that this 999 cc petrol engine could be heard.

It was the higher-powered version of the 999 turbo-powered engine with 115 brake horse-power ( the other 999 cc engine has 95 brake horse-power and is 5 speed ) that was fitted to our Kamiq which was matched up the six-speed gearbox which I think is the better package for this car of this size and weight.

A view of the Skoda Kamiq Photo Brian McDaid.

Normally it would only be the driver and passenger seats that could be adjusted but the Kamiq has also an adjustment for the back seat as well which has the dual benefit of changing the amount of room that you have in the boot. And if that wasn’t enough, the floor of the boot also changes in height which leaves the overall floor area completely flat when the back seats are folded down flat to accommodate the biggest load.

The interior of the Skoda has a very classy but fuss-free feel to it. The LCD unit in the middle of the dash deals with everything from radio, phone, Sat Nav right through to the reversing camera. But for me the big analogue face of a clock in Roman numerals displayed when everything was switched off was just so relaxing on my drive along the road.

I didn’t drive this car long enough to find out what it was like on petrol but I did do a long term test on this power plant that was fitted to the bigger Skoda Octavia and I was amazed how easy it was on fuel so I expected this Kamiq would achieve a good mid 50 miles to the gallon in a smooth driving mode no problem.

Overall I was very impressed with Skoda’s offering of this crossover and it simply looks very good on the road. It has more room on the inside than what its stylish exterior would suggest. It drives very well on the road and with a good proven small cubic capacity engine it ticks all the green answers for the future.

On a final note this week looking and thinking about the Skoda it takes me back to a memory of looking to trade in an old Opel Kadett at DMG Motors many moons ago.

That day I was over with my uncle, the late Fr. Mark Coyle. We ended up doing not one deal but two deals for a Skoda Octavia and a Seat Teledo, both second hand and traded in two cars the Opel and a Fiesta which were in Ards Friary in Creeslough. They were the first diesel cars the Capuchin Order purchased in the community in Ards.

Sadly both Fr. Mark and Danny McGinty have both sadly passed away but life goes on and I’m still very happy to give my thoughts on cars as we now move back from diesel to petrol.