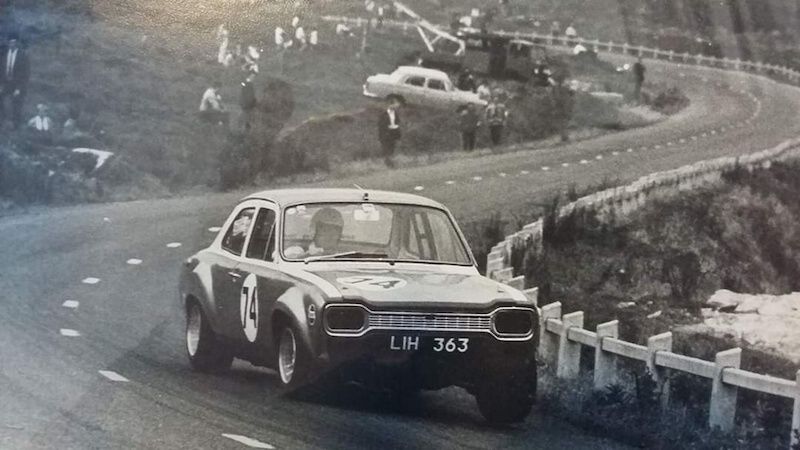 DD Motoring: Why we stuck with Scientifically Treated Petroleum (STP!)

Ferry’s corner was a bad one, even when I was only allowed to go as far as Mrs Blakes at No 30 around to Mrs Murray’s at No 21.

That’s where my mum had a clear view out the window in Wolfe Tone Place from her sewing machine to keep an eye on me.

I was on wee bike on solid rubber tyres and no freewheel feeling every pebble of Fanad gravel and expansion cracks in them old concrete footpaths traveling up through the saddle and through your arms if you held them straight especially on the down-hill section.

In childhood summers it seemed like years rather than months so in my mind I spent twenty years clocking up miles along that section of footpath in front of our home in that little red bike with white mudguards.

“Go easy on that bike or you’ll fall off it” my mother would always say when I’d call in to the house for a drink of water or maybe some Tree Top added on a really warm day. It was nice to hear her telling me to be careful, then I knew she was keeping an eye on me and I would be safe.

Tree Top was just magic even made bicycles go faster, in my mind anyway. The bottle that it came in was magic too!

That white top turned into an egg cup when the bottle was finished. I even remember coming off the bike one day at Ferry’s corner and ended up crashing into our own wall bending my front wheel and giving myself a cut under the chin that would not stop bleeding. 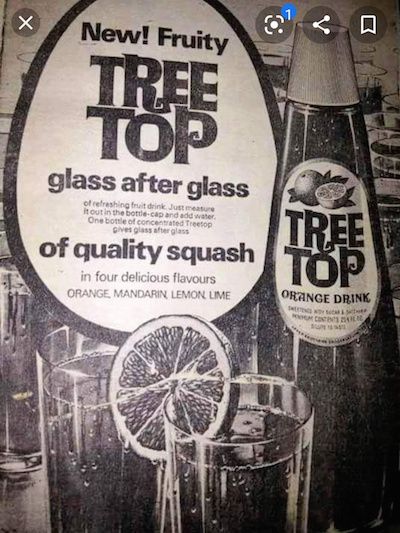 Tree Top a super drink and memory from childhood.

The Tree Top bottle was brought out that day and by the time I was on my second glass of orange squash coloured water I was as right as rain.

The wee bike was soon outgrown and football and rounders were the big thing in our green which had a capacity of 1.200 and that was only the two teams everyone playing.

Patsy Ferry did commentary of the game in his version of TV sport presenter Brian Moore, God rest the both of them.

Then some idiot would ‘big toe’ the ball and as if it was a magnet the ball would end up in one of the no fly zones – Murray’s or McMorrow’s garden. 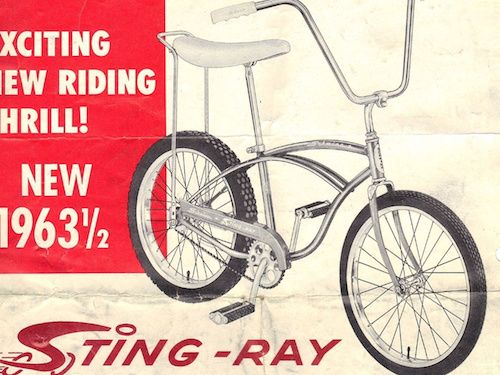 A Sting Ray one of the bikes I enjoy the manys the day on.

Even before the ball made it over the garden hedge everyone was lying flat in the green in complete silence hoping the longer grass around the edges of the green would hide them.

Then someone would whisper “Gon and get it” and someone else would reply ‘NO f***ING WAY GON YOU’. Then the goalkeeper would be offered a promotion of playing out field if they went into the garden for the ball.

In those days no one liked being in goals so as it happened on this evening I was the keeper that night and I was offered the promise of promotion to an outfield position if I went in for the ball.

As I lifted the latch on the wooden gate the front door opened at the same time ‘What do you want?” the woman of the house asked me sharply,

‘Ammmm … I was wondering… Ammmm could….? ‘You were wondering what, son?’

‘Ammm I was wondered if I could take a loan of your Shaun’s’ bike?” which I spotted parked against the footpath at the front door.

“Aye ok, but watch yourself on it, and take that bloody ball with you and tell them bucks in the green if it comes over that hedge again and breaks all my flowers I’ll put it in the fire’.

I kicked the ball into the green and headed off on Shaun Murray’s new blue Raleigh bike, far too big for me but I managed by stepping up on the high rounded kerbs in Wolfe Tone Place and got up on the saddle.

Real pumped up tyres and a freewheel and brakes. I was made up. I wasn’t going far, only spins from Phil Bonnar’s No 32 right over to Coyle’s at No 15. I could cycle over and back that road from one side of the green to the other all night in those summer evenings 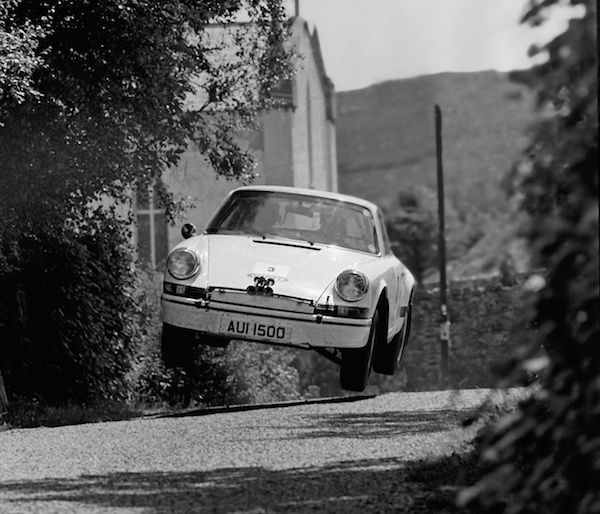 Curley’s Porsche flying through the air just as Rory described it . Picture By Esler Crawford.

Over at Coyles there was always a few of the older boys standing chatting always on about rallying or engines.

Tony and his brother Paddy and Hugh Coyle and Rory Kennedy from up Glencar chatting about this ‘Curley man” and how high he put the Porsche up in the air then at the rally and chasing about Robert Ward a local garage man who was fast and fearless behind the wheel, his name was familiar because my father bought a Renault 4 from him. 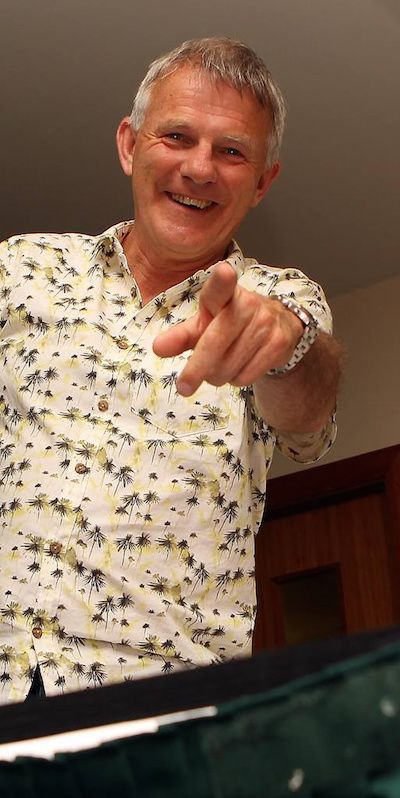 Rory would be on about his father Jim Kennedy and Fr. Willie Mc Menamin about them putting their Hillman Imp off the road somewhere.

I knew Jim Kennedy and his Hillman Imp, only to see going up the road and the noise of it from its exhaust which was nearly bigger than the car. Jim sitting in it and looking like ‘Joe 90’ from the TV, who both wore heavy rimmed glasses.

Fr Willie Mc Menamin was our priest at St. Eunans, I could never imagine him as he filled the chapel with his unmistakable voice, calling out notes heading as speed down at twisty road on the Donegal. Rory was only eleven or twelve years old, just a few years older than me but that gap seemed far bigger when you were a wain. 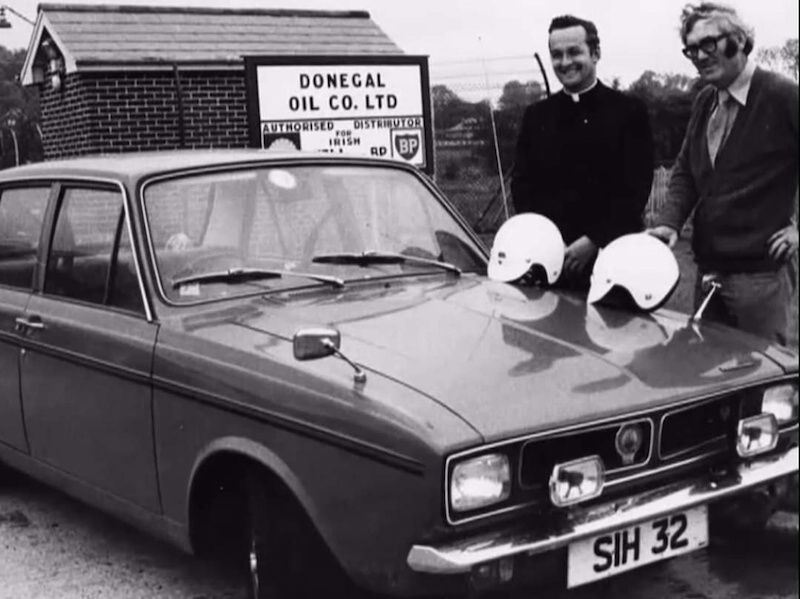 Jim Kennedy and Fr Willie Mc Menamin ready for their 1st Donegal Rally in their Hillman.

Rory had his own bike, and he had a job, selling the Evening Press and Heralds for John Crearand. Tony Coyle had a racing bike which had the must-have STP sticker on it. Every one had a STP sticker on their bike on the back mudguard beside the reflectivor tail light, or on the mud flap if you had one on the front mudguard. STP was an oil treatment for engines the short for Scientifically Treated Petroleum not that most of us had a clue what it was for but everyone had a sticker. 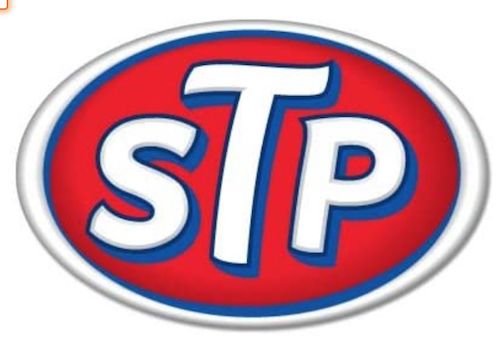 The Old STP sticker a must for anycar or bike.

Rory would be animated telling us about the rally and it in Downings even before it was called the Donegal International Rally him sitting there resting one foot on the ground sitting on the saddle.

I would be conveniently over at the high kerb trying to do the same doing a balancing act with Coyle’s high hedge for a bit of support and trying to look as cool as the rest. Then my father would ruin it all by calling me over from the front door of our house.

Heading over on Shaun’s bike to see what I was wanted for I’d imagine I was driving Jim Kennedy’s Hilman Imp rally car, making all the engine sounds and the gear changes. Or even that 9 year old Joe 90 from the television who could drive anything from a Russian Mig fighter jet and even imagined flying through the air in Curley’s Porsche, whoever he was!

Our a local mission into Murrays of Mc Morrows for the ball. Most times my father missions wasn’t that exciting, ‘gon down for 20 Major before Gallen’s shop closes, message received and understood Captain, I would think into myself.

If the ball didn’t go into Murray’s garden that evening I might never had discovered rallying, over at the corner of Wolfe Tone.

Checking a few details for this write up I ended up on the phone to Rory Kennedy, chatting about those first years of the rally in Donegal and was surprised that we have turned full circle.

Rory in his spare time and with the break in rallying this year in this pandemic was more interested in a journey that I had travelled in Donegal a few years ago which he is now researching back on a bicycle, of all things.

It was a walk I did trying to find the Old Lough Swilly Railway line from Derry To Burtonport which now is part of the planned Greenway in Donegal. We sit there talking about a route with Rory now taking notes on locations on a journey before roads, and Donegal’s rally, that of the railway line and if was passable on his mountain bike.