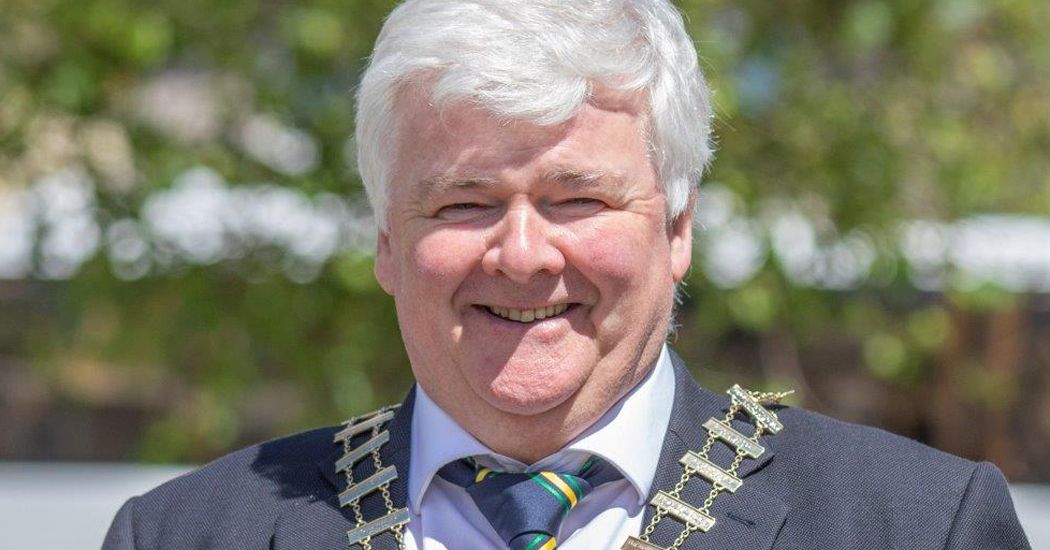 Cllr Crossan thanks frontline heroes after his Covid-19 battle

Outgoing Cathaoirleach of Donegal County Council Cllr Nicholas Crossan has paid tribute to Ireland’s frontline workers after overcoming his own battle with Covid-19.

Buncrana Cllr Crossan was one of the more than 400 people in Donegal who contracted coronavirus since March.

Looking back on his illness, Cllr Crossan said he was now thankful to be on the road to recovery.

“I want to publicly than the medics and frontline staff who not only looked after me but to all those affected by this pandemic,” Cllr Crossan said.

As the county reopens after being stopped in its tracks by the virus, Cllr Crossan added: “Thankfully the curve is starting to flatten.”

Cllr Crossan will take a well-earned rest as he passes his leadership role on to Fianna Fáil Cllr Rena Donaghy today.

Looking back on his year as Donegal’s first citizen, Cllr Crossan remembered the highlights, sad losses and the challenges he faced.

Cllr Crossan said he was “the proudest man in Donegal” to be elected as Cathaoirleach back in 2019.

His year as Cathaoirleach was marked with sadness from the outset. The late Cllr Manus Kelly passed away in June following a tragic road accident in the Donegal International Rally.

“I think Manus would have made a great contributions to this council. I know his dad (Cllr Donal Kelly) is sitting there and proud to take his seat and to carry on his contributions,” Cllr Crossan said.

On a personal note, Cllr Crossan took a moment to remember his brother, the late Theo Crossan, who sadly passed in August 2019.

Cllr Crossan also paid a special tribute to his wife Rosemary and his children who supported him in his role and throughout his recent health concerns.

Among the highlights of his year were the election of the Donegal Youth Council, meeting Donegal’s diaspora and selling Donegal as a county in which to do business. Cllr Crossan also expressed his appreciation of Donegal County Council’s close relationship with Derry City and Strabane District Council in promoting the north west.

He thanked the all-inclusive council for their cooperation in the year gone by and praised outgoing Leas Cathaoirleach Cllr Niamh Kennedy’s commitment to the role and her commitment to the people of South Donegal.