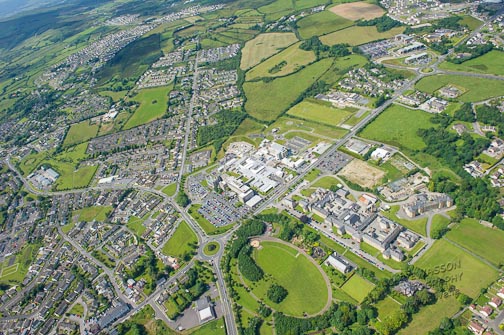 The population of Letterkenny is estimated to increase by 40% in the next 20 years.

Letterkenny has been included in a new Growth Centre Plan, published today, which identifies how towns must develop over the next 20 years to cater for huge expected increases in population.

The Northern and Western Regional Assembly (NWRA) Regional Spatial and Economic Strategy includes tailored plans for ‘Growth Centres’ Letterkenny, Athlone and Sligo in the next 20 years.

The Strategic Plan for Letterkenny provides a framework for growth and investment to build its function as the primary urban centre in Donegal.

The vision for Letterkenny is that, between 2020 and 2040, the town will grow to a centre of at least 27,300 people. It will encompass all the key characteristics of a future city, with an expanded employment base, an additional 4,000 houses, together with an expanded offering in education, public services, civic spaces, and a regeneration and reconfiguration of the Town Centre.

It is anticipated that Letterkenny’s employment numbers will also increase by approximately 5,000 – 6,000 additional jobs, bringing the overall number of jobs approximately to 17,000.

The strategic plan said there is an opportunity to expand Donegal’s ICT cluster of multinational companies to build further sustainable employment in the North West.

The report targets new areas for General Employment at additional lands at the IDA Business Park along the N-56 Link, and the former Unifi lands at Kiltoy/between Carnamuggagh/ Lisnenan.

The new Regional Spatial and Economic Strategy (RSES) aims to transform the West, North West and Border region between now and 2040 with a new, focused and more strategic delivery of housing, transport infrastructure, healthcare, education and childcare – while also developing more employment clusters in high-value sectors such as tech, advanced engineering, food and medtech.

Commenting on today’s report launch, David Minton, Director of the Northern & Western Regional Assembly, said: “The RSES is a tool to reimagine our communities and villages; our towns and urban places as we begin to remake our own future in a post-pandemic world. It is a portrait of how we learn lessons from the Covid19 pandemic and deliver real change for people. The strategy charts a path for high net remote working, more affordable housing, safer cycling and better work-life balance through concepts such as the ‘10-minute town’”.

“We never imagined that we would be launching it in a context of crisis such as this, but we believe that the need for such a transformative tool could hardly be greater right now, and we hope the strategy has the chance to inspire us and other places”

“The RSES is as essential for Dublin and the east coast as it is for the West, North West and Border region. For too long development in Ireland has been allowed to happen in a haphazard way that has made Dublin sprawl inefficiently into its neighbouring counties while the West, North West and Border regions have languished without proper services or infrastructure. It is time for change. The RSES will provide that change, in partnership with the local authorities and other stakeholders.”

Click here to read the Executive Summary of the RSES document: https://www.nwra.ie/pdfs/NWRA-RSES-Executive-Summary.pdf