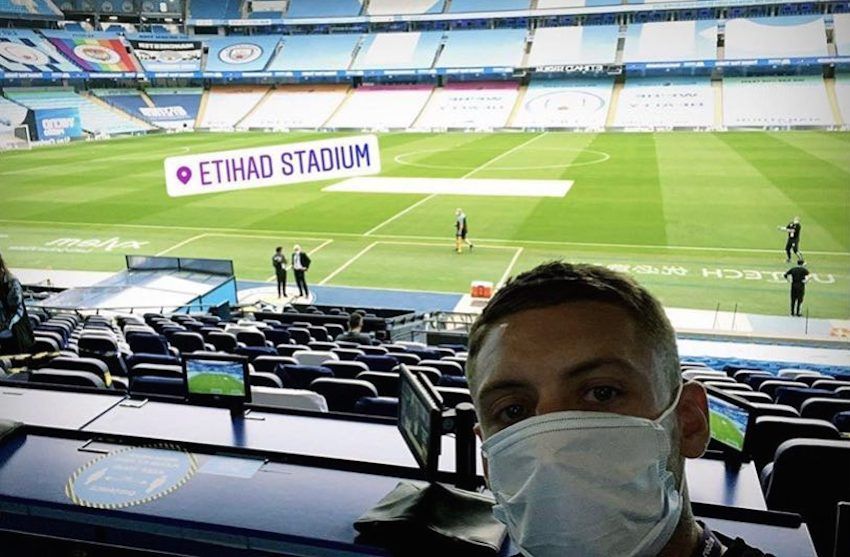 A DONEGAL man was among only 300 people in attendance at last night’s Premier League game between Manchester City and Arsenal.

Joe Scanlon from Ballybofey was working as an in-play betting analyst at the game and watched from the Etihad Stadium’s press box.

The Premier League’s ‘Project Restart’ began with an earlier scoreless draw between Aston Villa and Sheffield United at Villa Park before City routed Arsenal 3-0 in the later game.

Scanlon has been working in the role across the Premier League for a few seasons now and described last night’s as a ‘surreal’ experience.

“It was like watching a training session,” Scanlon, who previously worked in the same job at Finn Harps home games, told Donegal Daily/Donegal Sport Hub.

At the start of the game, played before a practically-empty stadium, players took a knee for the Black Lives Matter campaign.

Including players and management, the total number inside the stadium was only around 300.

Scanlon said:  “It was nothing like a real game. There was no intensity to it and players seemed at times as if they weren’t trying near as hard when tracking back.

“The players looked rusty in the first 20 minutes and they looked not fully fit.

“City got better as the game went on and Arsenal seemed to give up after they went one-nil down. It was men against boys after that.

“I would say there’ll be a few upsets against the bigger teams.”

Sky Sports dubbed artificial crowd noise alongside their commentary while the match day experience was vastly different from the usual madness of the top flight.

Scanlon said:  “They had the tightest security that I’ve ever seen anywhere.  My temperature was checked a couple of times before I was allowed into the ground at all.

“It was a good experience even though there were only about 300 people in total in the ground, including the players.”