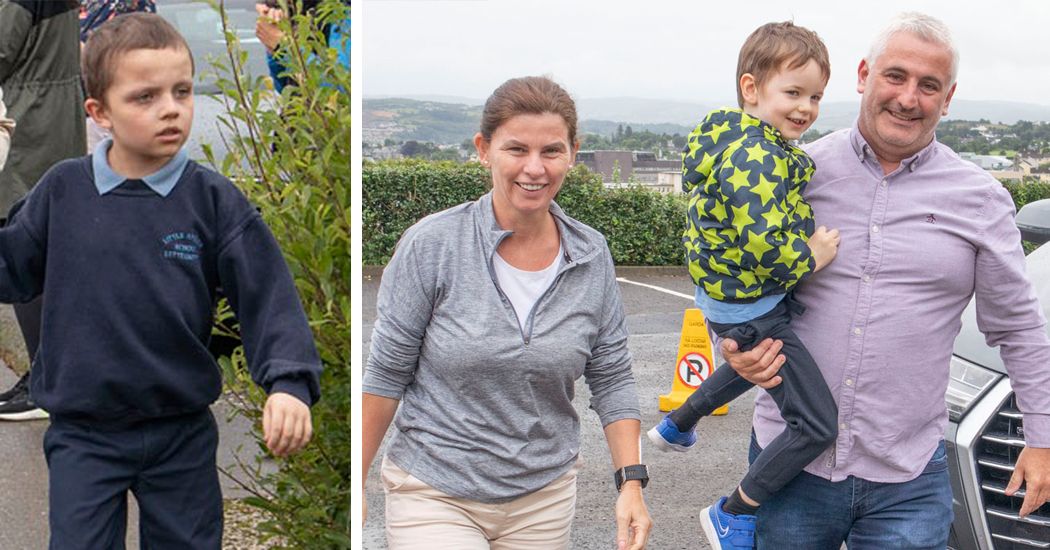 It felt like September had come early as the pupils of Little Angels in Letterkenny returned to school this morning.

The Special School pupils are some of the first children in Ireland to return to their classrooms after the pandemic.

As summer provision begins, families experienced all the ‘first day back’ excitement of getting uniforms on, getting school bags packed, and saying emotional goodbyes at the drop-off gate.

Teachers and SNAs lined the entrance to guide each pupil inside. Parents had happy waves and thumbs up for each other as they drove past – sharing a collective relief that their children would get the chance to experience a school routine after a long four months. 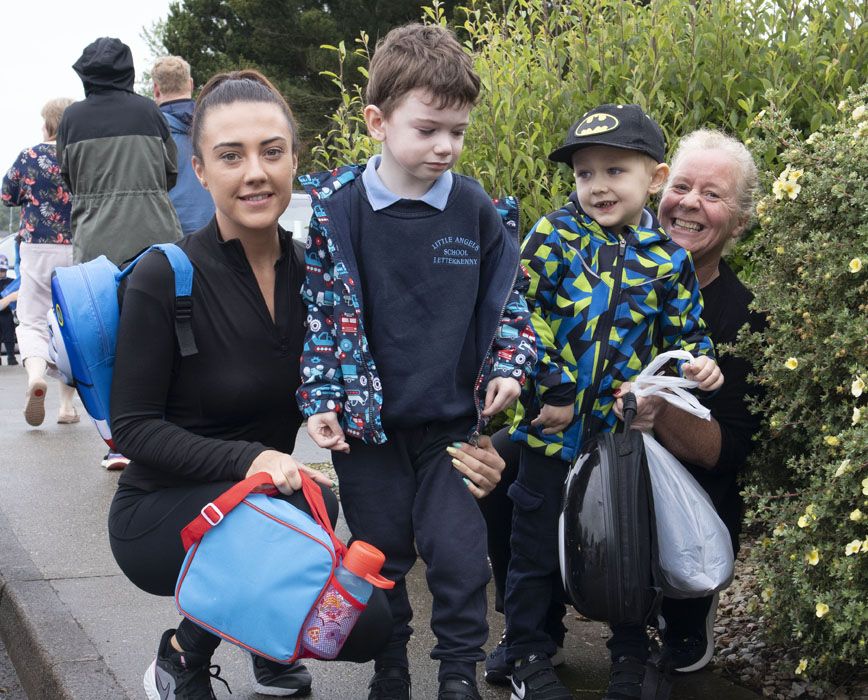 Dearbhla Shiels and Amanda Carroll with pupils Pawel and Callum when they arrived at Little Angels School in Letterkenny. (North West Newspix)

Online ‘Circle Time’ will now be replaced by real interactions and activities that are so valuable to the pupils – some of which had been cocooning at the start of the outbreak.

For Michael ‘Birdie’ McLaughlin, today marked a major milestone in his life. It was the first day that he walked into school.

Wearing his favourite, noisiest trainers, the eight-year-old beamed with delight to show everyone the new ability he gained during lockdown. He was greeted with a round of applause from Little Angels staff who were amazed to see Michael live up to his ‘Birdie’ nickname and take flight.

Michael was just two years old when he suffered a cancerous tumour in his left leg. Doctors were forced to amputate his leg below the knee and he has used a wheelchair ever since due to difficulties with various prosthetic legs. He astounded his parents in March when he let go of his walking frame and began to take his own steps.

Wobbly at first, Michael soon learned to lean on walls, radiators and anyone who was nearby, to find his balance and get to where he needed to go.

Now, he can go to the beach, help with gardening and stand beside his mum making pancakes – all special ‘firsts’ for a boy whose independence and self-confidence has blossomed.

“I don’t know what happened. He was doing his steps but the walker was in the way and he was fed up not getting to the fridge. One day he was leaning on the wall and off he went. He hasn’t looked back since,” said Mary McLaughlin, Michael’s mother. 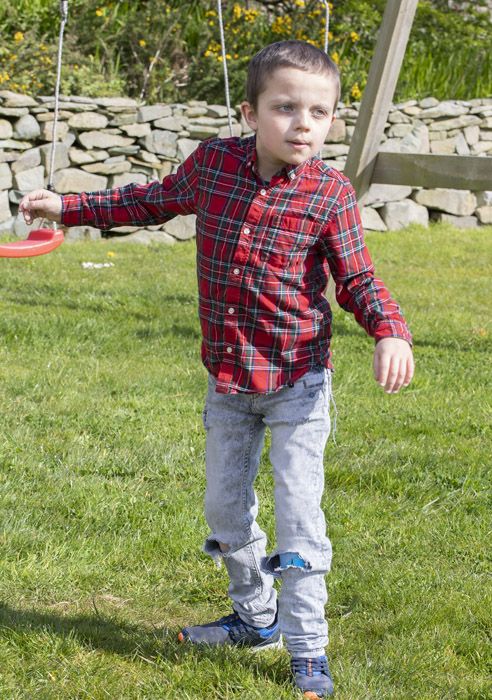 8 yr old Michael “Birdie” McLaughlin out for a walk in May. (North West Newspix)

Michael’s parents Mary and Kevin got the chance to share in the awe of his progress all over again at the school gate today. “He knows he’s doing something amazing,” Mary said, “I am so proud of him.”

Michael, who also lives with autism, simply couldn’t wait to say goodbye to his parents today and break free from Covid isolation.

“What this means for him is his first piece of normality in four months,” Mary said. “When lockdown started there was very little provision for the children, people were talking about the elderly but nobody mentioned the children and carers. We were staying away from everybody to protect him. His small circle of friends was taken away from him and he couldn’t understand why.

“But it was amazing to see all the kids going into school today and Birdie couldn’t wait to get rid of me!” 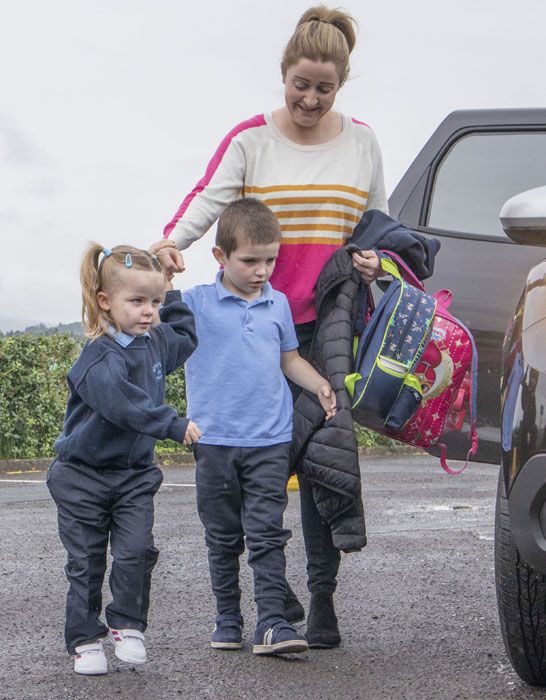 Two other happy pupils going back to school together were cousins Conor Doherty (aged 5) and Grace McHugh (aged 3).

Conor’s mum Gráinne Doherty was delighted to get him back into a routine.

“Conor is non-verbal so it is hard to know has he missed school or not, but the socialisation and seeing his friends is brilliant. I find him slipping into habits at home so it is good to get him back into the school routine of getting up early and into a school environment as we come close to September,” Grainne said.

Six-year-old Cody Watson was bouncing in his car seat going into the school driveway. His dad Leonard feared there might be some tears, but Cody, who is non-verbal, had a huge smile for his SNA Lourde Walsh.

“We’ll see a big difference in him this evening,” Leonard Watson commented. 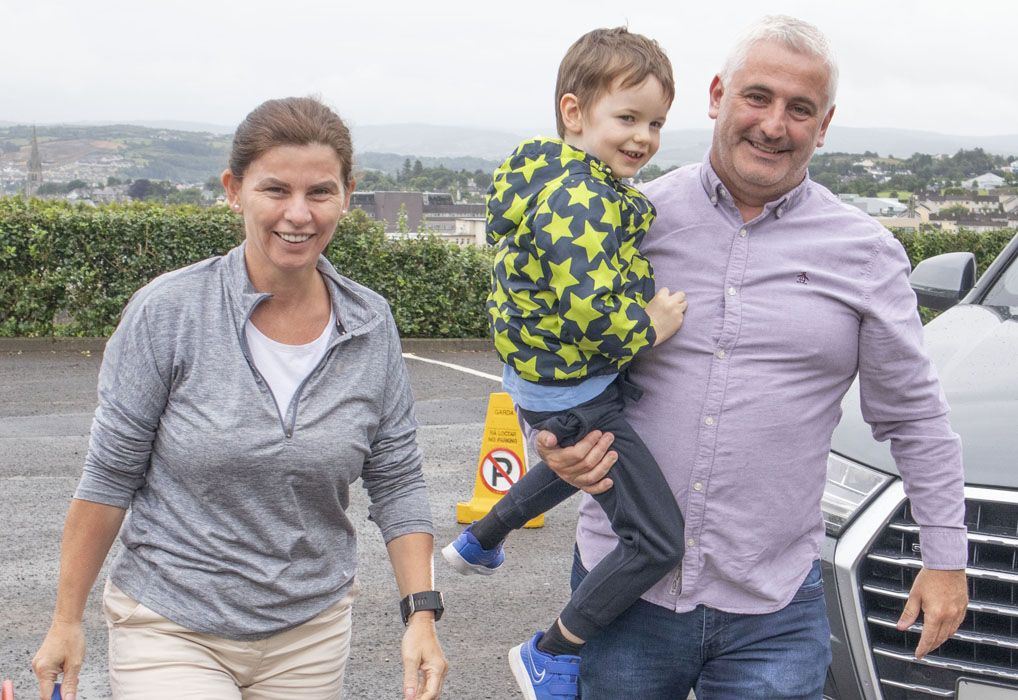 Many parents are also grateful that Little Angels management listened to their concerns when July Provision was in doubt. The school initially decided not to run classes this year, but the decision was reversed following a meeting last week.

“It’s a great day for all parents and families.”