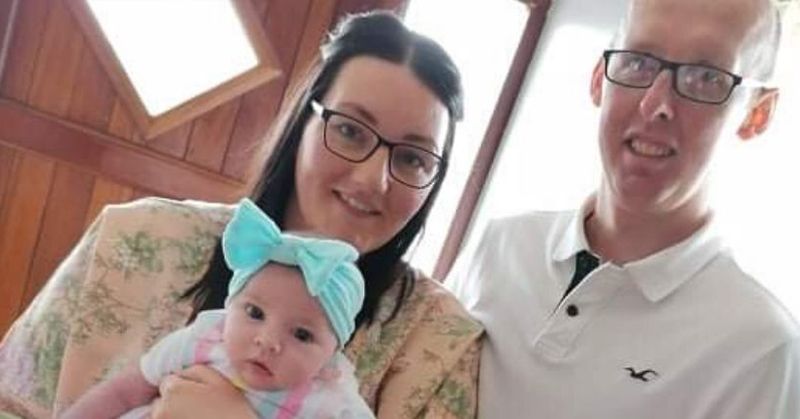 Enda McDermott was one of Donegal’s most skilled hurlers before his life was changed by stroke.

He has survived not one, but two strokes in the past three years. Now, after welcoming the arrival of a new baby, Enda shares the story of his remarkable journey to spread awareness and help others find valuable support on their doorsteps.

Article written by June Shannon on behalf of the Irish Heart Foundation:

At 34 and a new dad to a four-month-old baby daughter, Enda McDermott from Donegal should feel as if he is entering a new and exciting phase of his life. However, after suffering from two strokes over the past three years for him, it doesn’t quite feel like that.

Enda’ s most recent stroke occurred on the 11th of May and he is currently getting support from the Irish Heart Foundation’s new stroke support service after being discharged from Letterkenny University hospital at the height of the COVID-19 crisis.

Recalling his first stroke in March 2017, Enda who is fit and healthy and a keen hurler, said he was heading out to work when he suddenly lost the power in his right arm. He then felt a tingling in his lip and a glance in the mirror told him that his face had drooped on one side.

He managed to alert his wife Christina before his right leg went from under him and as he struggled to tell her what happened he realised he couldn’t speak.

Enda was rushed to hospital where he received the shock diagnosis of a stroke at the age of 31.

Like most people, he said he thought the doctors had got it wrong as he believed only older people had strokes. Unfortunately, this is a common misconception.

It is estimated that one in four stroke sufferers in Ireland are aged under 65 and the 2016 Irish Heart Foundation/HSE National Stroke Audit 2016 showed a 26 per cent increase in the rate of younger stroke since the previous audit in 2008.

“I wasn’t expecting that. I play a lot of GAA. I am fit and healthy it was scary,” said Enda on learning of his diagnosis of stroke.

Enda counts himself “lucky” that he recovered quickly from his stroke and was left without any permanent disability.

After just one night in hospital, he was discharged home and six weeks later he was back at work.

For three years Enda continued to enjoy good health and he and Christina welcomed their first child, a baby girl into the world in March this year.

Unfortunately, however their happiness was short-lived when just two months later Enda suffered a second stroke.

This time the only symptom he had was a severe headache. He was in so much pain that he said he couldn’t lift his head off the pillow or open his eyes.

Again he was rushed to hospital where a second stroke was diagnosed.

“This time I definitely didn’t think this was a stroke ….I had a headache I wasn’t expecting it to be a stroke …it just came out of the blue…I am lucky because I have movement and speech. There are people out there a lot worse off but it is still very worrying,” he said.

This time Enda was to remain in hospital in Letterkenny for a week and although again he said he considered himself lucky to make a full recovery, he said the thoughts of his new baby daughter at home and what it might mean to her if he was not “lucky” this time around, were at the forefront of his mind.

Established in response to the COVID-19 pandemic, the new telephone and online stroke support service has been developed by the Irish Heart Foundation and the HSE and is aimed at all stroke survivors who need support.

The service is manned by a dedicated team of specialist staff at the Irish Heart Foundation who are available on the phone and email; to answer any queries stroke patients may have and provide advice and information based on each individual patient’s need.

For Enda the service has been a lifeline. He receives a weekly call from Irish Heart Foundation Stroke Support Coordinator Naomi Brogan, who does everything from providing information and reassurance to practical and emotional support and she even chases up hospital appointments.

“Naomi rings me every week without fail…she’s lovely and even though it’s like she knows me, its also like chatting to a stranger as well, its easier to talk to a stranger sometimes you can tell her how you are feeling,” Enda said.

“I can say anything to her if I am worried about …she reassures me …..she’s chasing up appointments for me…I can’t fault her she’s brilliant.”

“It’s different from the support you get from the hospital they can reassure you but its different with Naomi she knows what she is talking about, she gives you that wee bit extra reassurance,” he added said.

Enda said he would definitely recommend all stroke patients take advantage of the free stroke support service from the Irish Heart Foundation.

Enda is currently waiting for a procedure, which it is hoped, will reduce the risk of recurrent strokes. However, in the meantime he said he was very anxious that a third stroke could strike at any time and the support he receives from Naomi was helping with that anxiety.

“I do have a fear of it happening again,” he said.

While he awaits his procedure Enda said he never takes anything for granted anymore because you never know when it will all be taken away.

He added that his new baby daughter was a great distraction but he was also very conscious that he wanted to be around to see her grow up and be there for her.

“When I had my first stroke I said it couldn’t be a stroke I am 31 years of age and fit and healthy, but obviously it does happen and it doesn’t only happen once,” he said.

Stroke – you are not alone

The Irish Heart Foundation in conjunction with the HSE National Stroke Programme, has launched a new telephone service for anyone who needs support, advice or information in the aftermath of stroke. Call 01 6685001 or email support@irishheart.ie  Monday to Friday 9 am to 5 pm. For more information, see here.

The Irish Heart Foundation’s nurse support line is available five days a week. Anyone living with heart disease and stroke who has concerns or questions about the coronavirus can contact the nurse support line on 01 668 5001 or support@irishheart.ie.

If you found this article helpful and would like to donate to the Irish Heart Foundation please see here.