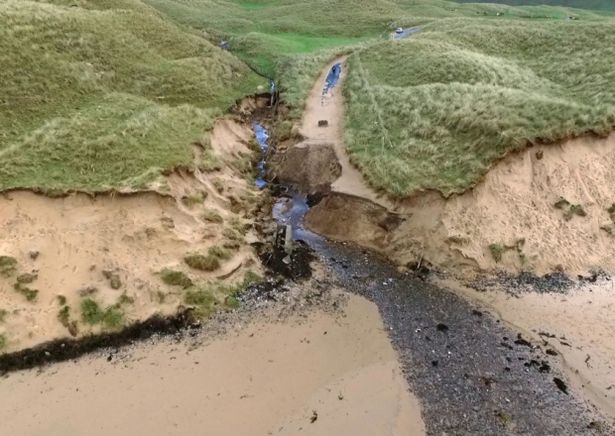 A petition has been launched calling for urgent action to protect the Inishowen coastline from erosion.

Locals are fearful that the historic St Mary’s Church and graveyard in Lagg, parts of the Ballyliffin Golf Club and popular beach walks could be washed away if nothing is done by the authorities.

Campaigners say that a number of holes at Ballyliffin Golf Club, which hosted the 2018 Dubai Duty Free Irish Open, are under threat, while part of a popular walkway at Pollan Strand has already been lost. There are fears that further storms could damage the now world-famous golf club.

RTE reports that a consultants’ report commissioned by Donegal County Council in 2016 recommended “no active intervention” to combat coastal erosion at five sites around Inishowen.

However, if conditions worsen further, there is a risk that erosion at Five Finger Strand could reach as far as St. Mary’s Church and graveyard.

Concerned residents are sharing a petition to call on all relevant authorities to remove the red tape and allow works to begin. Campaigners have said they are willing to do the work themselves if permission is granted.

The ‘Save Our Beaches‘ petition, which has over 500 signatures, is addressed to Donegal County Council, Office of Public Works, The National Parks and Wildlife Service and the Department of the Marine.

The campaign page says: “Coastal Environments- Beaches, Walks, Sand dunes, access roads, car parks, golf links and private property are being damaged with coastal erosion and nothing is being done to protect these public amenities and safe public access to them for locals and tourists.