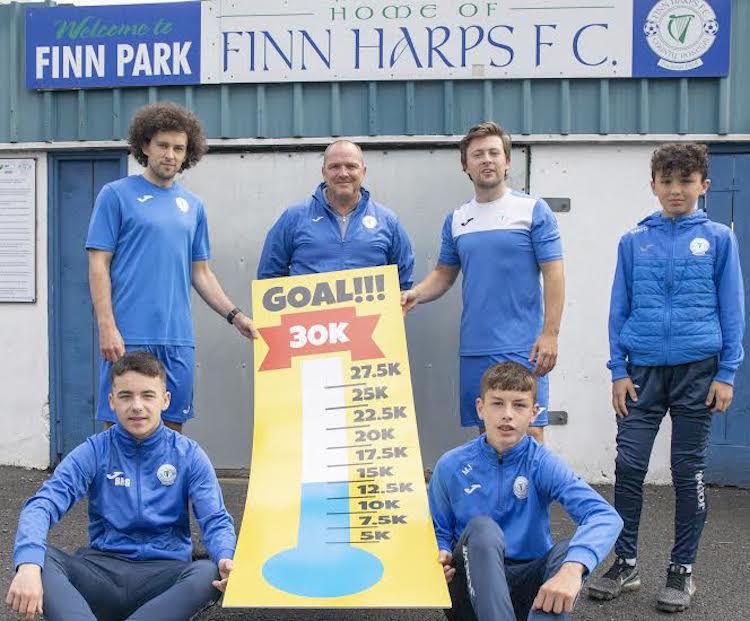 With the League of Ireland season set to resume at the end of July, Harps have launched an initiative aimed at making necessary improvements to enable the club host games at Finn Park.

So far, over €21,000 of a €30,000 target has been raised – and some of Donegal’s best-known sporting celebrities have lent their voices to the ‘Bring Football Home’ campaign when they appeared in a promotional video.

“Harps, of course, are a fan based club and most important of all Finn Harps is YOUR club – continue to support them,” says long-time Irish Olympic Team Manager Patsy McGonagle.

“Finn Harps have provided senior football in Donegal since 1969 and some of the finest footballers in Ireland have proudly worn the jersey over the years.”

Professional boxer Jason Quigley, who is ranked number 14 in the WBC world rankings, is a big Harps fan and has urged the north-west public to dig as deep as possible.

Quigley, a regular on the terraces when back home in Ballybofey and who wears the jersey with pride across the world, said: “We want to see a return of football for the fans and with the fans. Donate what you can so we can see football back at Finn Park.”

She is the daughter of Maurice Toland, whose two goals against Waterford United in 1996 helped win promotion to the Premier Division for the first time and her great-uncle Bobby managed Harps in the 1980s.

“Our history is who we are and will help us build the future,” Tyler said.

The works required at Finn Park involve modifying the existing dressing rooms and also the provision of additional temporary space in the ground.

All funds raised from the ‘Bring Football Home’ campaign will go towards these upgrade works.

Finn Harps Director Ivan Harvey said: “Thank you to everyone who has donated.We are overwhelmed by the amazing response from all  who have donated and shared our campaign.

“We’ve a bit to go but I am in no doubt with the incredible support and following we have we will get there.

“We can’t wait to get back on the 31st and welcoming you all back to Finn Park in time.”

As an added incentive any ‘Bring Football Home’ donations of €50 or more will have the donor entered into the club’s 500 club draw for the corresponding period and have a chance to win with a weekly prize fund of €500.

All donors of any amount will be entered into a draw for a 2020 club jersey signed by the current squad and a pair of tickets for the next Republic of Ireland home match at which spectators are allowed.