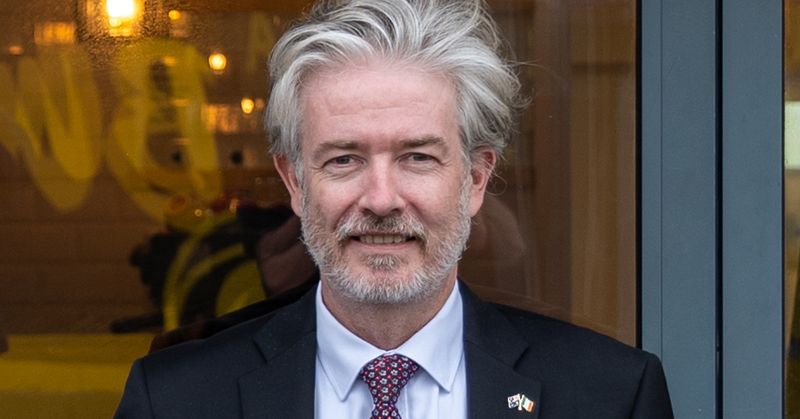 The Australian Embassy Head of Mission has paid tribute to young nurse Mary Ellen Molloy during a visit to Donegal.

The beloved Ardara woman was a staff nurse at the Royal Melbourne Hospital.

The Australian Embassy Head of Mission Robert Owen-Jones visited Mary Ellen’s grave last week to lay two wreaths as a mark of respect from both the Australian people and from staff and patients at Royal Melbourne Hospital.

Mr Owen-Jones’s tour around Donegal involved a number of visits to the Australian diaspora and to sites of importance to both Donegal and Australia.

This was the Head of Mission’s first regional visit outside of Dublin. During his visit, he stopped in Bundoran to meet with some of his fellow countryfolk Julian Farmer, Adam Cross, and Noah Lane from Foam, Bundoran who have made Donegal their home where he was warmly welcomed with some Australian tucker and made to feel home at in a Donegal sense of the way.

This was followed by a visit to the Orphan Girls Famine Memorial at the Ballyshannon Workhouse. Mr. Owen-Jones met with local historian Anthony Begley who shared stories about the orphan girls who had left Ballyshannon to be transported to Australia during the famine. The Head of Mission placed a wreath at the memorial.

Robert Owen–Jones Australian Embassy Head Of Mission, laying a wreath at the Orphan Girls Famine Memorial in Ballyshannon to remember the 19 orphan girls who were shipped to Australia during the famine.

He then went on to visit Ardara, followed by Arranmore Island, accompanied by Head of Economic Development in Donegal County Council,  Anne Marie Conlon, where he had an opportunity to see how remote working can be achieved in Donegal.

In the afternoon the delegation travelled to Letterkenny to the County Museum to meet with more Australian citizens who have made Donegal their home.

Members of the Australian community living in Donegal who met with Head of Mission Robert Owen–Jones in the County Museum in Letterkenny.

The final call was to Fahan, where they were met by Cllr Albert Doherty Cathaoirleach of Inishowen MD who accompanied the group to the Mass grave at St. Mura’s Church Of Ireland  were there lies the remains of two seamen  who were aboard the SS Laurentic that sank in Lough Swilly on 25th January 1917 where a  wreath was laid in their memory.