A LIFFORD man who attacked another man on his way to work told his victim that his family would ‘be got’.

Leon Kelly (32) of Beechwood Grove, Lifford, was charged with assault causing harm in the incident at Guest House End, Raphoe on January 25, 2017.

Kelly appeared via video link from Castlerea Prison at the latest sitting of Letterkenny District Court.

The court heard that Kelly had been before Letterkenny Circuit Court on charges relating to an incident involving members of the victim’s family.

A plea was tendered in respect of the charge.

Sergeant Jim Collins told the court that the victim was walking to work at 7.50am on the morning in question when he was approached by Kelly, who said: ‘Come here you wee bastard you. I’m being taken to court and I’m looking at five years because of your family. If I go down here, you will all be got.’ 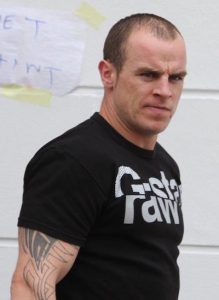 The court heard that Kelly hit the victim on the left cheek and he fell to the ground. Placing his knee to the victim’s face, Kelly said: ‘I could batter the shite out of you now and no-one would see it.’

Kelly hit the victim on the face again as he got up.

The victim, who attended hospital, received bruising to his forehead and cheek, a burst lip and his jaw was clicking for a number of weeks.

Pictures of the injuries were submitted to the court.

In 2017, Kelly was jailed for two years and six months, with the last six months suspended, at Letterkenny Circuit Court.

Kelly, who has previous convictions for assault, public order and road traffic offences, is in custody on other charges and has been on remand in Castlerea for the last five months.

Solicitor for Kelly, Mr Frank Dorrian, said there had been nothing to preclude Gardaí from interviewing his client in Castlrea.

“Had he been prosecuted, it would now have eclipsed these matters,” Mr Dorrian said. “It is not fair to say that the State was precluded. A more prompt prosecution maybe would have put this to bed.”

His client had been living in Northern Ireland since that time.

Mr Dorrian said: “His existence has been destroyed by substance abuse and alcohol. He was under extreme pressure. There was a degree of inevitability about the sentence. HIs anger and fear spilled over.

“It was a nasty event, but it was the nature of the threat rather than a very serious threat.”

Judge Paul Kelly adjourned the matter until July 20 to allow for the preparation of a victim impact statement.