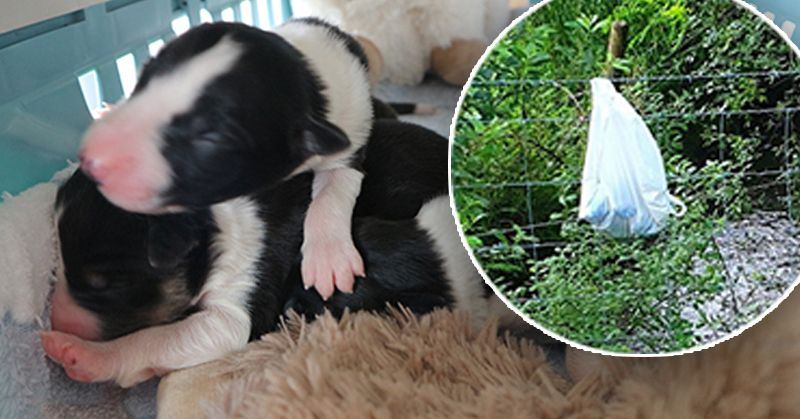 Shock as puppies left to die in ‘cruel and heartless’ dumping

Animal rescuers have told of their shock after three puppies were dumped in a plastic bag and left for dead dangling over a river in Donegal.

The cruel abandonment was discovered on Wednesday near Drumkeen, between Ballybofey and Letterkenny.

Three helpless puppies collie were deliberately dumped in a plastic bag ‘like trash’ and tossed towards the river to be drowned.

Only for the bag becoming caught in barbed wire they would have certainly died.

The little animals’ lives were saved thanks to a concerned member of the public and fast-acting vet Alexander Smyth.

The ISPCA has issued an urgent appeal for information.

Alexander Smyth, Director of Veterinary Service rushed to the scene after receiving a call from a member of the public who thought they saw kittens abandoned at an inaccessible river crossing.

On arrival, Alexander found a plastic bag hanging from a strand of barbed wire at the top of a fence and proceeded to perform a specialist rescue, knowing that if the bag became detached or ripped, whatever was inside would almost certainly drown in the fast-moving water.

It was only then that he discovered three new born collie puppies, no more than seven to ten days old.

The puppies were immediately removed to safety and treated for hypothermia, hypoglycaemia and hunger by the veterinary team who were on standby.

ISPCA Senior Inspector Kevin McGinley said:  “It is disturbing how anyone could be so cruel and heartless, to put three vulnerable little puppies in a plastic bag leaving them to dangle over a river to an inevitable death.

“There is just no words.

“These three puppies are lucky to be alive thanks to the kind-hearted member of the public and to Smyth Veterinary Services for rescuing them.

“It’s unclear how long the puppies were there but they are now receiving round the clock care at the ISPCA Animal Rehabilitation Centre. The situation could easily have been avoided if the puppies’ mother had been spayed or if the dog’s owner had contacted the ISPCA for help.  Spaying and Neutering is the obvious solution in preventing unwanted puppies from being born in the first place”.

Director of Veterinary Service, Alexander Smyth said:  “This is a tragedy in this day and age with so many animal charities and places that are willing to care for these animals, the suffering of these animals could have been avoided.  Whilst we have provided a specialist rescue service to numerous pets, wildlife and large animals, we are not a shelter and do not have the facilities to provide long term care for these animals once they are rescued.

“The dedicated staff at Donegal ISPCA were thankfully able to take these puppies into their care, for that we owe them a debt of gratitude. The puppies are doing well but will require intensive support as they are very young and now orphans, and the ISPCA team will continue to provide this over the coming weeks.

“We support the work of the ISPCA charity and all the good work they do for the welfare of animals across Ireland. It is only possible with donations from the public and we encourage people to consider them in their charitable donations”.

Alexander added:  “The abuse and needless suffering of animals is unacceptable, and we encourage if anyone has any information about any cases of abuse, neglect or otherwise that they should make it know to authorities so it can be stopped.

“Animals in these situations are stressed and/ or wild and they can pose risks to persons attempting to rescue them.

“The environments such as rivers and confined spaces can pose further hazards to rescuers, so you should not attempt any rescues of wildlife, pets or farm animals without specialist training and when completely safe to do so. Contact the ISPCA, Fire Service or your local Veterinary Surgeon for advice.”

The ISPCA would like to remind pet owners that animal abandonment is a criminal offence and is appealing to anybody with information to contact the National Animal Cruelty Helpline in confidence on 1890 515 515, email helpline@ispca.ie or report online here.

Shock as puppies left to die in ‘cruel and heartless’ dumping was last modified: July 12th, 2020 by Staff Writer