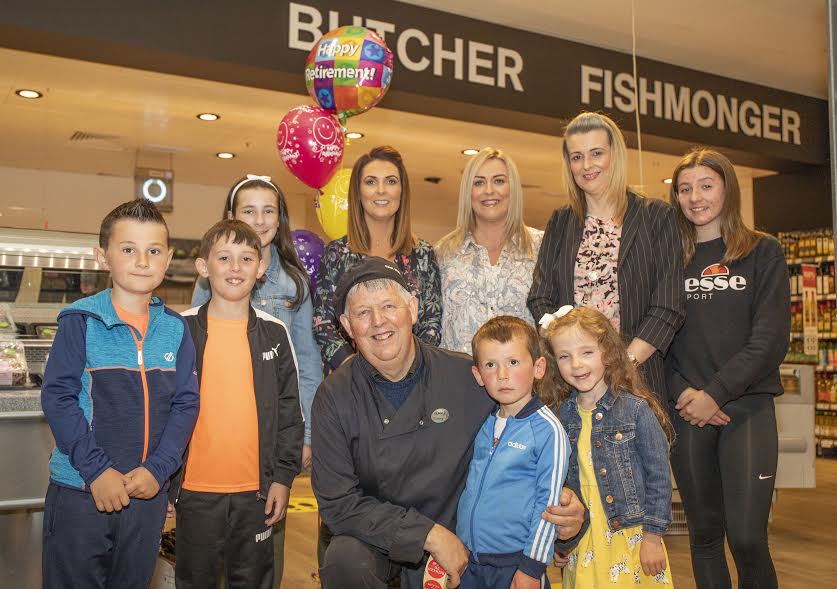 Tommy takes in the bacon for last time – after 49 years

ONE of Letterkenny’s longest-serving workers hung up his apron for the final time on Friday afternoon.

For the last 49 years, Tommy Tease has been a friendly face behind the butcher and delicatessen counters at Dunnes Stores on the Old Town Road.

Tommy made the short commute from his home at Glenlee Court in Ballymacool every morning with a smile.

“It was the best job in the world,” Tommy told Donegal Daily as he served some of his last customers.

“The volume of stuff on sale now is some difference from when I started.

“Back in the 70s, it was more simple and the variety definitely wasn’t what it is now.”

Tommy was joined by daughters Jennifer O’Connor, Caroline Doherty and Clare McDaid and grandchildren Jamie, Zara, Tori, Ryan, Kyle and Ava this afternoon as he got ready to say a fond farewell.

Having worked initially at Patterson’s on the Main Street, Tommy moved to the premises on the Old Town Road in 1972, when the shop was then known as ‘Best’, which it remained until Dunnes Stores took over.

Tommy remained and is among the originals behind the counter, where he became an institution as he worked into a sixth decade in the shop.

Now, though, he intends to spent more time on his hobbies, like his gardening and he is also a regular fixture at bowling matches across Donegal, playing for Manor Bowling Club.

He said: “I’m 66 now. I suppose I could have gone on for a while, but I just thought it was a good time to retire.

“I’ll have time for myself.”

Tommy takes in the bacon for last time – after 49 years was last modified: July 10th, 2020 by Chris McNulty