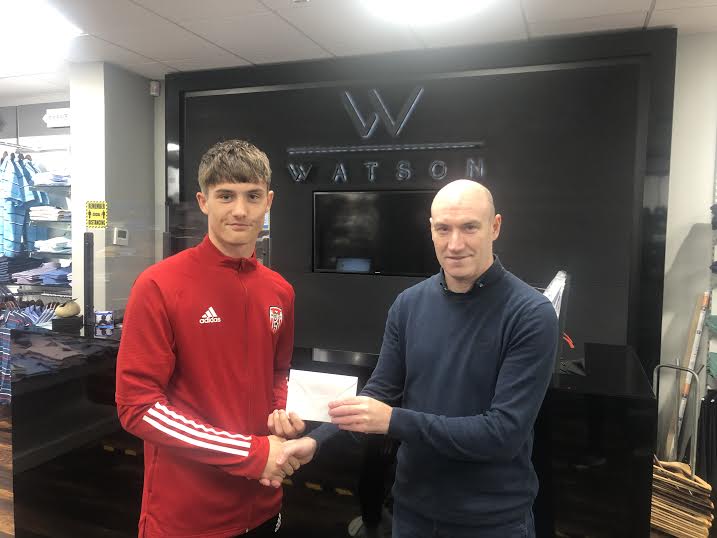 THE Covid-19 lockdown cut the sporting world off at the knees – and it arrived just as Patrick Ferry was really getting into a groove.

The Gweedore man was selected as the Watson Menswear Ulster Senior League Player of the Month for February. The sudden shutdown of sport meant even the presentation of the prize to the young Derry City attacker.

Ferry returned to training with the Candystripes last month and was name checked by Declan Devine, the Derry manager, last week. Devine said Ferry had shown ‘real promise’ and described the teenager as ‘outstanding’.

“It gives me confidence to push on,” Ferry said.

“Declan has said to me to push on and keep working hard.

“I’m training with the first team since we got back from lockdown. It’s good. It was tough at the start.

“I’m in every day with the first team. Training has been really good. I was in for pre-season at January. It’s been a big step up from under-19s, but Declan, Kevin (Deery) and everyone have been really good.

“It’s hard work, but it has to be done and it’d definitely helping me.”

Ferry had been in flying form in the early part of 2020 and was showing superb signs in the bmcsports.ie Ulster Senior League.

‘Dixie’, as he is affectionately known, terrorised defences with some performances to catch the eye of the selection panel.

Ferry was chosen as the February Watson Menswear Ulster Senior League Player of the Month.

He said: “I was going well. Lockdown didn’t happen at a good time for me. I scored a few goals and was improving.”

Playing in the intermediate ranks, he feels, has improved his game to no end.

Since their return to the USL, Derry have utilised the grade well in terms of developing fresh blood to inject into their first team squad.

Ferry said: “It’s helping to get ready to play against men with the first team. It means then the step up isn’t as big. it’s still a step, but it’s not as big a shock.

“There are experienced players in the Ulster Senior League who have been around the block. It’s tough playing against that experience, but I think I’ve done okay. It’s toughened us up.”

Ferry’s displays also earned an international call-up at the start of the year. In late January, he played for the Republic of Ireland Schools in a 2-1 win over Australia at Whitehall.

He said: “That was my first time in an international side, but it was really good to get the call up. There were a few Donegal boys in that, which helped a good bit. I enjoyed that the experience. I wasn’t used to that level, but I think I did well.”

Letterkenny hit five in first half to...

Tigers bite in second half to leave...