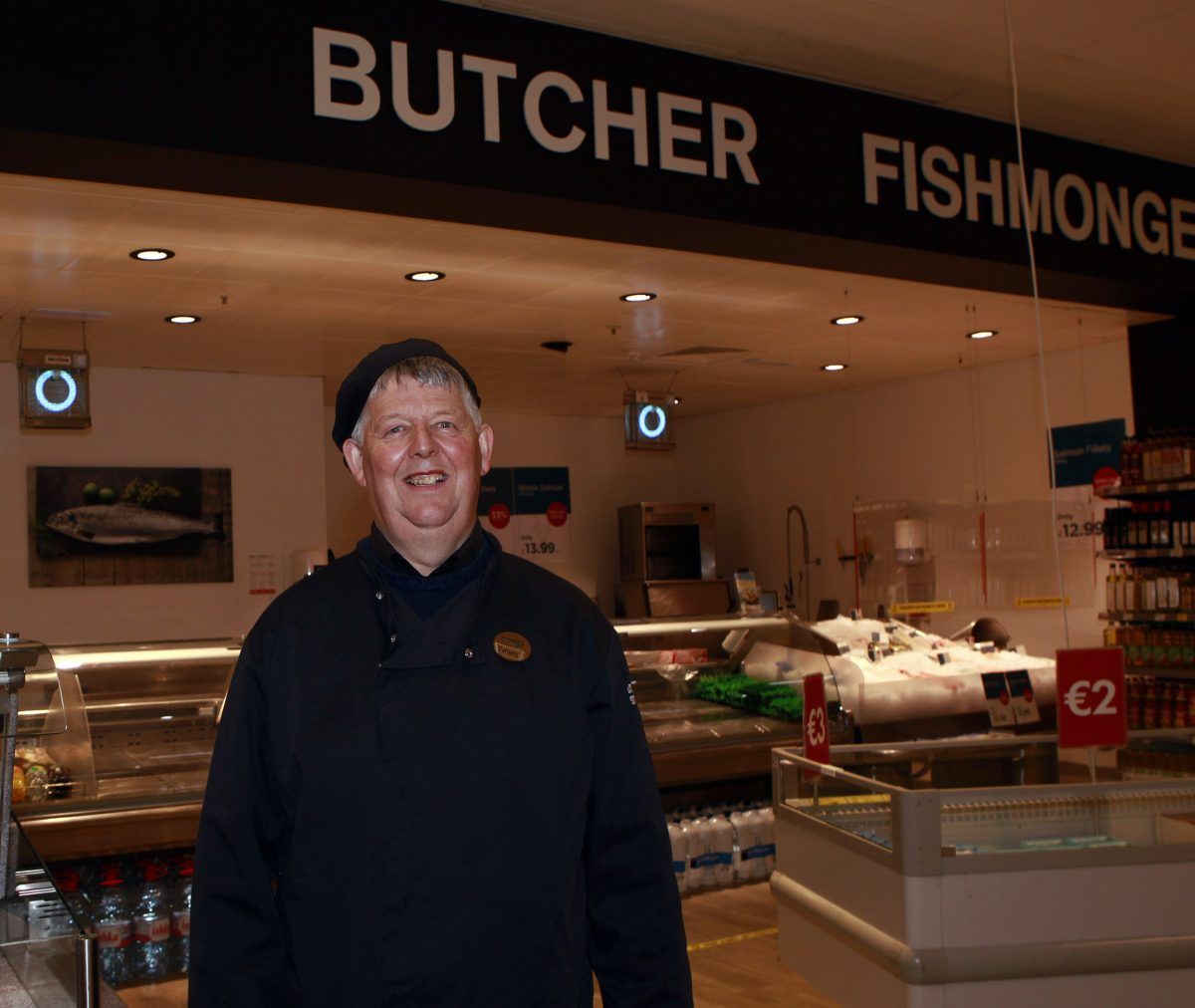 Last Friday I was in the staff canteen in Dunnes for the first time in my life.

I was there to meet Tommy Tease who was on his very last day of work as a butcher.

“Do you want a cup a tea Brian,” Paddy Devir asked, as he pulled out a few chairs next to a table with a cake specially made for Tommy. It had a picture of him at full stretch in deep thought competing in a game of bowls.

“Sit yous there boys I’m away to get a sup of milk boys”, Paddy said, as he popped down stairs to Dunnes to get milk for the tea.

Even Dunnes Stores canteen is no different to any other canteen, that they always seem to have no milk when you go to make a cuppa tea.

Tommy has drawn his butcher’s knife over his sharpening steel daily for 49 years in Letterkenny as he has served the public quality cuts of meat and has seen the many changes that Letterkenny and its shopping went through.

Tommy Tease complete with Dickie Bow in the early days of Dunnes in Letterkenny. 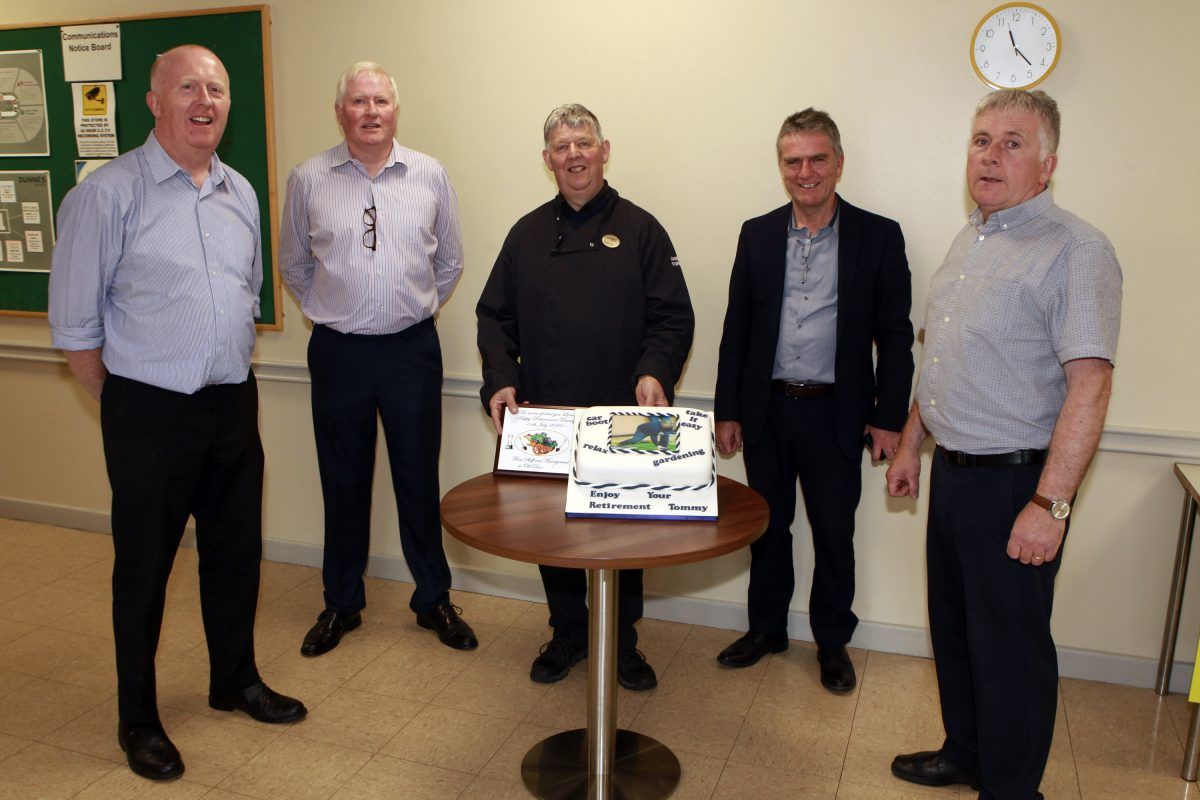 Tommy was a student at the old tech in the Burma when his mother sent him down to pay a bill in Patterson’s Butchers (next to where Magee’s Chemist is now) on the Main St.

Harry Patterson struck up a conversation with the young student and told him they were looking for a butcher boy to start in the shop.

Tommy told Harry he would ask the auld doll what she thought when he went home.

The late Harry Patterson who originally started Tommy Tease as a butcher boy in his butchers .

The following evening Tommy was sitting in his home when he saw a wee blue mini out through the venation blinds of the living room window pulling up at his front door at No. 26 Wolfe Tone Place. Then Tommy remembered that he had forgotten to ask his late mother Martha about the possibility of leaving school to take up an offer of work. In typical Tommy Tease style, Tommy gave his mother the answer before she asked a question: ‘That will be our butcher up about the job he was offering me.’

Long before the days of doorbells. The sound of a knocker striking the letterbox surround could nearly tell you what was going to greet you on answering the door.

“Good evening Mrs. Tease, did your son talk with you about the job I was offering him?” was the greeting Harry Patterson politely posed on the doorstep.

“Aye, Harry, he.. Amm, he did, Harry, he’ll be down to you on Monday morning,” Tommy’s mother replied.

When Tommy Tease started work there was at least four butchers along the Main St.

In Letterkenny, Pattersons, Doherty’s, Mc Glynn’s at the Market Square and Duffys at Lr. Main St.

Tommy started in the butchers as a delivery boy with an old butcher’s bike, his deliveries included runs to Mc Carry’s Hotel and to the Letterkenny General Hospital all uphill from Patterson’s butchers on the Main Street. The oversized carrier on the front of the bike was loaded to the brim with supplies of meat and sausages and more times than enough the meat was heavier than a young butcher boy and the bike often overbalanced and tipped over when he was heading places like up Spear’s Lane.

Tommy also had the job of making sausages that involved operating a meat auger which was manually powered and in which the sausage meat was filled into. Sausages were then measured against the four knuckles of your fist before making them into plaits and were hung on hooks in Patterson’s butchers shop.

In the early seventies Tommy moved to work to the newly opened Bests Supermarket at the foot of the town, Harry Patterson who introduced Tommy to the meat trade also moved there too. 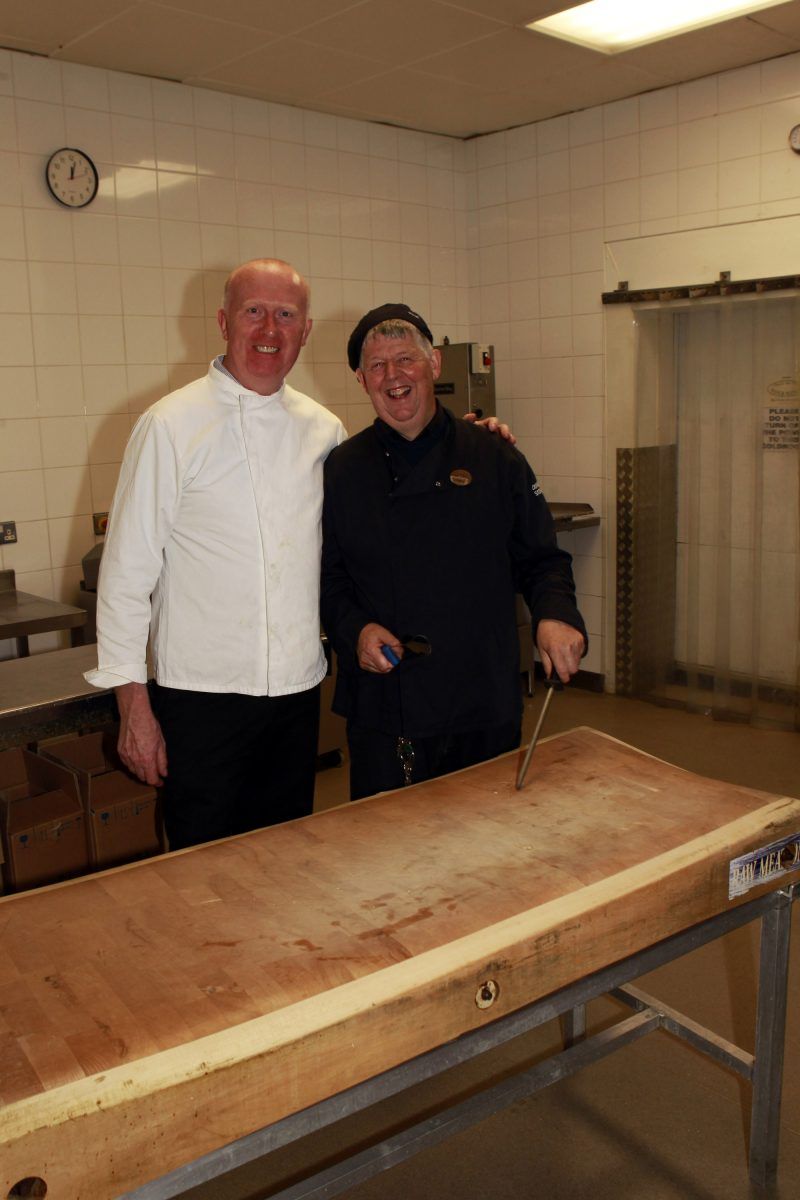 On Friday morning last, with a bit of gentle coaxing from fellow long-serving staff like Gabriel Rodgers and Paddy Devir, Tommy talked about the earlier days, about Benji from the Riordans on RTE doing one of the openings when it was Bests. He talked about himself and Gabriel and the Dunnes, Ben and Margaret (Heffernan) no less than the two Letterkenny lads met on a work trip to Dublin.

Tommy still has his Dickie Bow which was part of his working uniform in the early days. And in all the old staff photos you will see Tommy at the very back of the big staff photos over the years in Dunnes 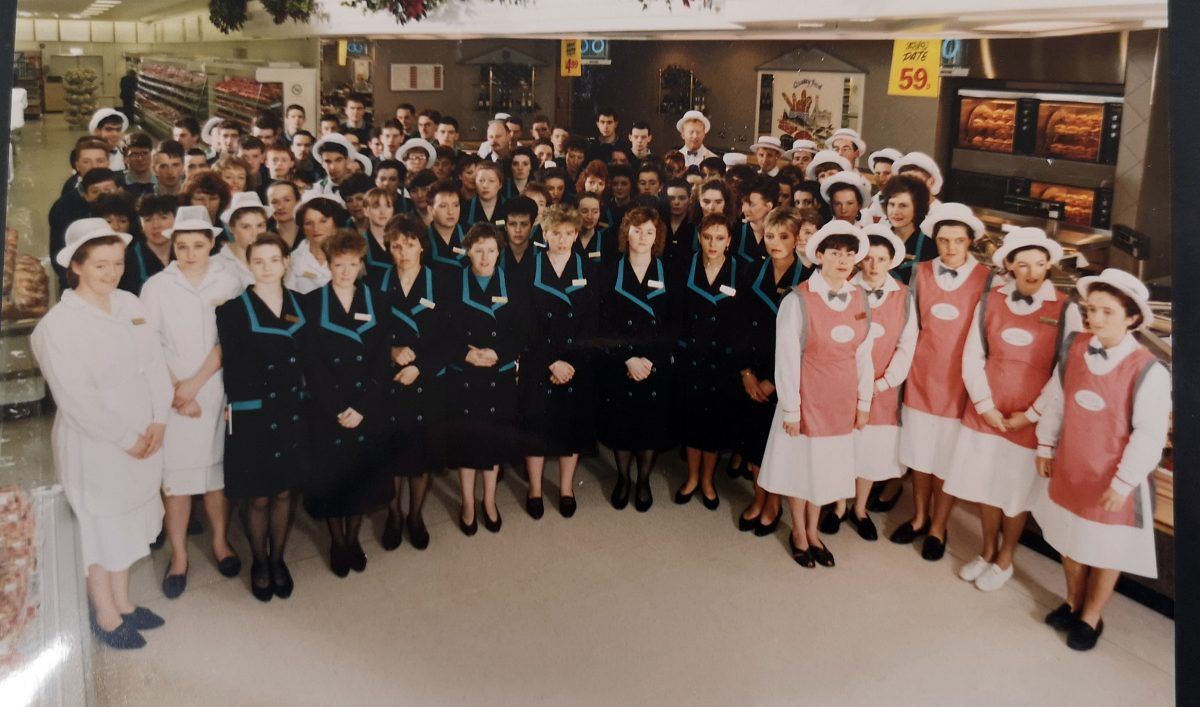 Some of the many staff in Dunnes that Tommy worked with over the years. 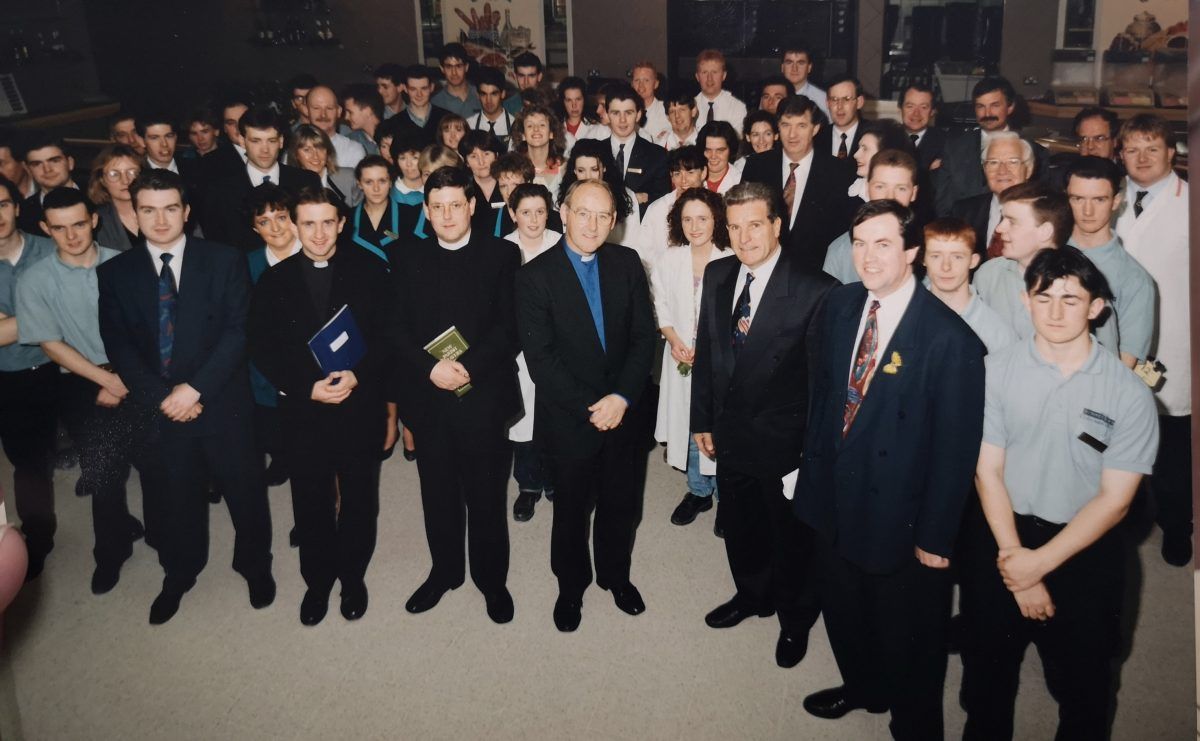 Staff at an official blessing in Dunnes with Tommy in the very centre at the back of the photo.

From days when Bests had new black and white televisions sets playing in the store windows and in the evenings and locals partook in the difficult task of watching the snooker in black and white through the shop window with no sound, watching for any score that flashed up in the screen to indicated what colour of ball was played or who was winning.

Sadly there are no butcher shops on the Main St in Letterkenny anymore. But Tommy took his trade and notched up 49 years on the old butchers block having a yarn out over the counter to people as he stood on a layer of tradition sawdust,
Tommy worked with a lot of people throughout his long service . He has seen many come and go and was never shy to fight a corner for someone new working in Letterkenny, starting out on the shop floor.

Tommy Tease’s family were among the first to live in Wolfe Tone Place when it was first built in the early 50’s (we were only blow ins to Wolfe Tone when we arrived in 1966 right next door to Jim and Martha, the children Gwen, Tommy, Trevor Yuel and not forgetting their wee dog called ‘Shot’. Tommy’s father Jim still lives there and possibly may be the very last surviving original tenant of the 34 houses when they were new.

Tommy’s first day at school was spent on the Port Rd in Letterkenny. His first day of work was on Upper Main Street in Patterson Butchers and around the town in the company’s car, a butchers bike making deliveries. Then he moved to Lower Main Street to spend the biggest part of his working life in the meat trade, meeting people from the day of Bests right through to Dunnes. 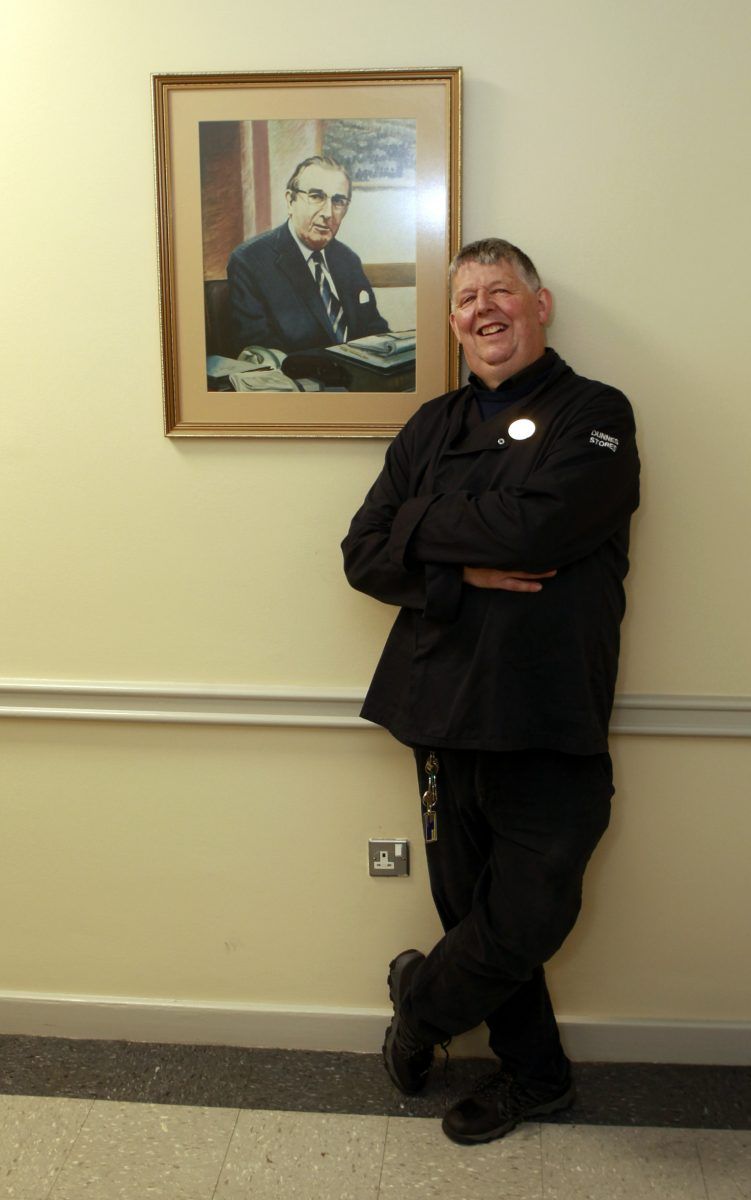 Tommy Tease beside a portrait of the Ben Dunne Senior on his last day in Dunnes in Letterkenny . Photo Brian McDaid.

On Friday evening Tommy posed for a photo beside the Ben Dunne Seniors portrait in Dunnes Letterkenny. Tommy looked more like an image of devilment of that of the day he first started in Patterson’s all them years ago.

Then at the bottom of stairs Tommy passed his hand under the clocking out machine in Dunnes for the last time to the registrar in the head office in Dublin after 49 years that Tommy Tease had left the building.

Thanks for sharing in the memories Tommy.

Thanks for sharing in the memories Tommy was last modified: July 15th, 2020 by Brian McDaid
Tags:
Brian McDaidDunnes StoresTommy Tease