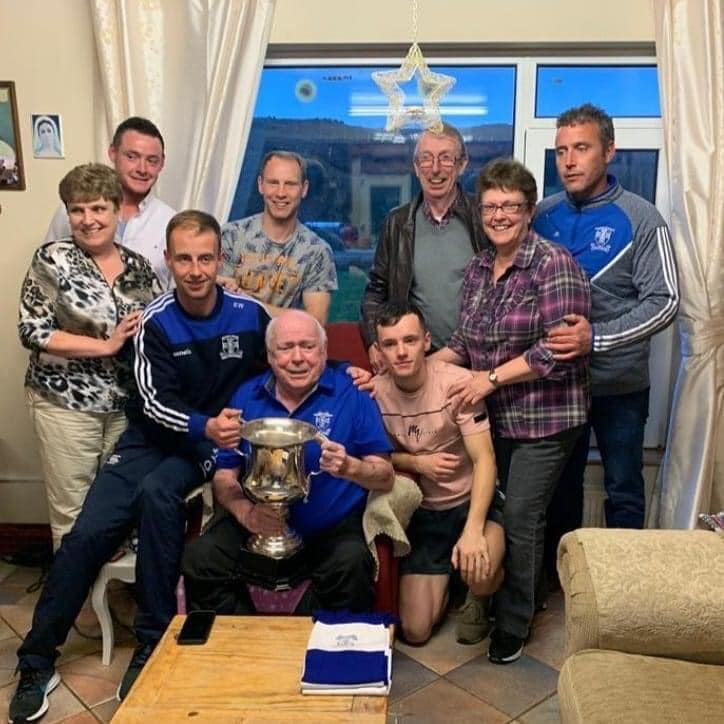 THE Naomh Conaill GAA club has paid tribute to its Club President, Pat Eamonn Boyle, who has died.

Pat was described by the club as a ‘leader’, having served as a player, mentor, Chairman and President.

“He was a driving force in the funding, and building of our spacious clubhouse, at the Davy Brennan Memorial Park.

“In his playing days, he was a member of a feared half forward line, with Gerry McDermott and Frankie Rogers, who all possessed, speed, and skill in abundance.”

The Naomh Conaill tribute said: “He was blue and white to his core, and loved watching this present squad, who have brought such pride to our club.”

When the Donegal Democrat was putting together a Team of the Millennium, Pat Eamonn showed his in-depth knowledge of Gaelic football as he won the competition, selecting 14 of the final 15.

Pat Eamonn’s remains will leave Shovlin’s funeral home at 6pm this evening. The Naomh Conaill club will form a guard of honour from the Chapel Brae.

He is survived by his loving wife Barbara deeply missed by his sons John, Eamonn, and daughters Ciara, Fionnuala, Niamh, Irene, and Barbara, sisters Ann, Margaret, and Mary, brother Hugh and pre -deceased by brother John.

Mourned by his grandchildren Orlaith, Darragh, Annie, Neil and Charlie, and his aunt Margaret Kennedy.

Requiem mass will be celebrated on Sunday (19th July) at 1:30pm in St.Connells Church Glenties, with burial afterwards in the local cemetery.

Due to government restrictions the house, Mass and burial are private to family and friends.

Social distancing protocols remain in place and people should refrain from hand shaking and hugging. You are encouraged to leave a personal message and your memories of Pat in the condolences section below.