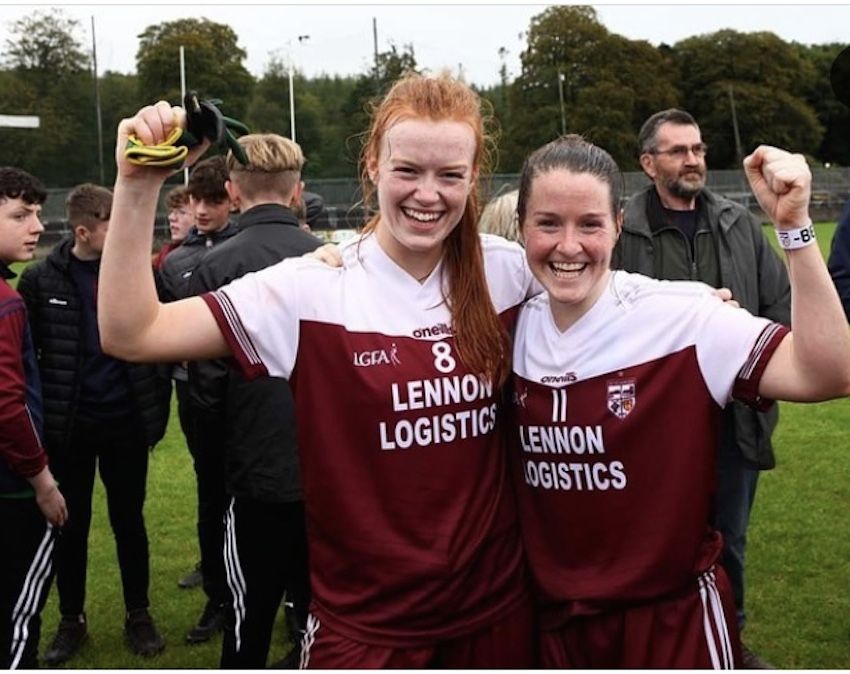 Donegal bride to be on rearranging wedding, Covid battle – and return to football

BRIDGET Gallagher can be forgiven for being ‘nervous’ as the Termon forward prepares for a return to competitive action on Sunday.

The 18 weeks since the Covid-19 lockdown was enforced have had her put through the ringer.

Gallagher (pictured above with Evelyn McGinley) contracted the coronavirus at Easter and has had to reschedule her wedding, but she’s taken it all in her stride.

Sunday morning sees Gallagher and Termon – the defending Donegal senior ladies champions – begin the defence of their crown as they take on Moville at The Burn Road.

“I’m anxious about going back, not because of the virus, but it’s just the new normal now,” Gallagher says.

“I’m looking forward to getting back, but I’m a bit nervous. There was a while there where we didn’t know what was happening and we thought there mightn’t be football. “It’s happened pretty quickly the news about going back.”

A physio in a Belfast hospital, Gallagher was redeployed to ward duty just after the outbreak of the Covid-19 pandemic.

After an outbreak in the ward to which she was assigned, Gallagher came down with the virus.

“It took me so long to get my energy back,” she says.

“It was a massive change for me going to the ward. I was worried anyway because I was going into the unknown. You were watching other counties and seeing the numbers. Thankfully it never got to that level.

“I got coronavirus on the ward. I was exhausted and fatigued for a while. The people working on the ward with me were all going down with it so I knew there was a high chance of me contracting.

“I took two full weeks off. I started off by going for 10-15 minute walks and built from that. When I got back home I was going to sleep for an hour.

“Compared to what other people suffered, I didn’t get it too bad. I wasn’t chesty and didn’t have a temperature.”

Just a few months ago, Gallagher and her fiancé, Tomás Gribben, were busy organising a New Years Eve wedding at An Chúirt Hotel in Gweedore. Those plans, too, have had to be altered and the couple are now arranging a smaller wedding to take place in October.

She says: “The hotel we had planned isn’t opening again until March next year. We just decided to bring it forward and have the two families there. It’ll be a small enough affair. But I’m not stressing – yet.”

Having played with her native St Michael’s before emigrating to London, Gallagher, with her home club not turning out at senior level donned the maroon of Termon upon her return home and she was in the Donegal colours, too, in 2018.

Last year, Gallagher proved one of the key figures as Termon reclaimed the Donegal title and she hit two goals in the Ulster Campionship win over Armagh’s Clann Éireann at The Burn Road.

She said: “Last year was brilliant. We had a real team bond. We got a few was in a row and that really helped our momentum.

“There was such a buzz and we enjoyed it so much. Maybe in hindsight, we lacked a bit of believe against Donaghmoyne in the Ulster final. We were beating them near the end of the game and they got a couple of late points. That run was brilliant, though, and it has given us more confidence now to kick on again.”

Termon’s charge begins with an early morning throw-in against Moville on Sunday and Gallagher insists that the Sean O’Donnell-managed side must be at their best from the off.

She said: “We have one of the tougher teams to start. Why not get tested early on to see where we’re at?

“Ideally, we’d like to have a few more games under the belt, but we’ll just take it and be grateful to be back. There isn’t too much between any of the teams and we found last year how hard it is to win the county. These games are always nip and tuck.”

Donegal bride to be on rearranging wedding, Covid battle – and return to football was last modified: July 21st, 2020 by Chris McNulty