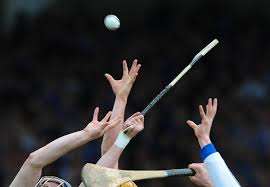 On a day of pleasant summer weather and on an immaculate pitch, it was great to see a Four Masters hurling team taking the field in Tir Conaill Park in championship action for the first time in many years. And the players lived up to the occasion with a great performance and a winning display against a good Letterkenny Gaels team.

Fergal McAllister and his mentors had the team well set up, with a good blend of youth and experience and they played with determination and no small amount of skill from start to finish.

After some early wides from both sides, Four Masters struck for a goal and a point before Letterkenny Gaels registered their first point after 15 minutes. The home side pushed on from there and put in a powerful 2nd quarter to lead 3:06 to 0:04 at half time.

In the 3rd quarter Four Masters notched another another 2 goals and 1 point before the Gaels hit their first point of the second half. Both sides traded scores for the remainder of the game, but in truth the home team never allowed the visitors to get a foothold in the game thereafter.

A late goal and point for the Gaels put a better complexion on the scoreboard but this was a day for the Blue & White’s.

The victory was built on dominance in the middle third of the pitch, scoring power up front and dogged & determined defending.

And it was great to see experienced players like Kieran Daly making a return to competitive hurling after a long lay-off and chipping in with a goal and two points on the day.

Shane Patton’s long puck-outs provided a great attacking platform for the home team and were a big factor in keeping the home team on the front foot throughout.

Well done to a brave Letterkenny Gaels team who never gave up and kept battling right to the end.

Next up for Four Masters is an away game to Carndonagh and they will be hoping to drive on from this great start and deliver another strong performance.

Setanta prove too strong for MacCumhaills as...