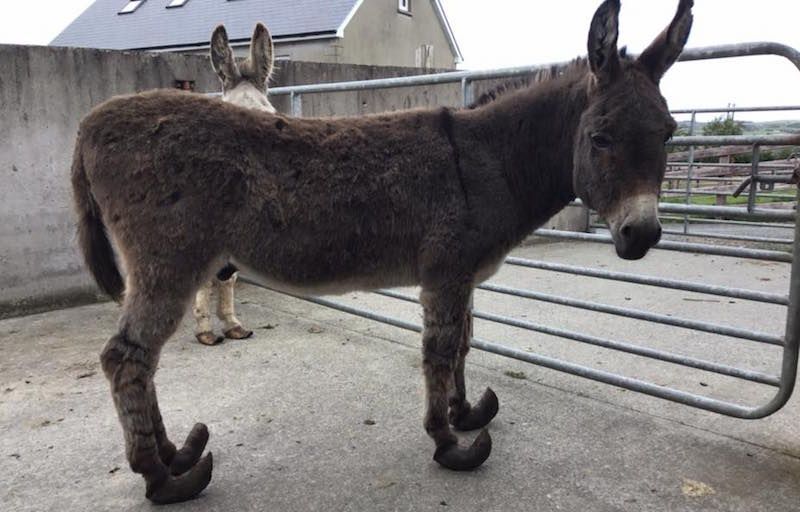 Donegal Donkey Sanctuary has said it simply does not know when cruelty to such animals will stop after it rescued eight more mistreated donkeys.

The terrified animals were taken in at the weekend after being found in counties Tipperary, Roscommon and Longford.

Some were so thin they were unable to eat, others were covered in cuts and sores and one is so frightened that it cannot move.

The centre is already home to 88 donkeys and this will bring the total to 96 rescued and abandoned donkeys.

However, despite limited resources and huge pressure on finances, Danny and his wife Sandra, say they will never turn away an animal.

He said “It has been very traumatic. All eight of them were in a bad way, some worse than others.

“These eight poor souls in desperate need of help and in a truly terrible state.

“The hooves on one little man are just beyond belief. The pain and discomfort that he is feeling as he attempts to move around are just horrific. His head is low and his eyes are empty.

“All are terribly thin and covered in cuts and sores especially on their noses and faces. They have sore eyes and painful feet. Just shocking.

“One in particular is absolutely paralysed by fear. He will not meet our eyes. When will it ever end?”

Danny said it costs approximately €1,000 a year to keep a donkey and this cost could rise dramatically if there are vet fees on top of that.

He said the arrival of Covid and pressure of people’s finances has only added to the neglect of donkeys across the country.

“People are getting it tight and they simply don’t have the money to look after their donkeys and they are being neglected.

“Vet fees and farrier fees have to be factored in and some simply don’t have that cash because they have lost their jobs or whatever,” he said.

Danny’s own sanctuary is suffering from every side as he simply cannot open the gates to visitors because of the pandemic.

“It’s not an option at the moment and we are being hit hard in the pocket because of it. We have the most amazing supporters but we can’t keep asking them to dip into their pockets every time there is a crisis.

“I dread to think if there will be a second wave because this is really only the tip of the iceberg as regard neglected animals.

“We’re already struggling to cope but if the second wave comes then we are going to be inundated with donkeys that people simply can’t or won’t keep,” he said.

If you would like to contribute to the Donegal Donkey Sanctuary please see https://www.gofundme.com/f/ptaq8h-covid19-appeal…