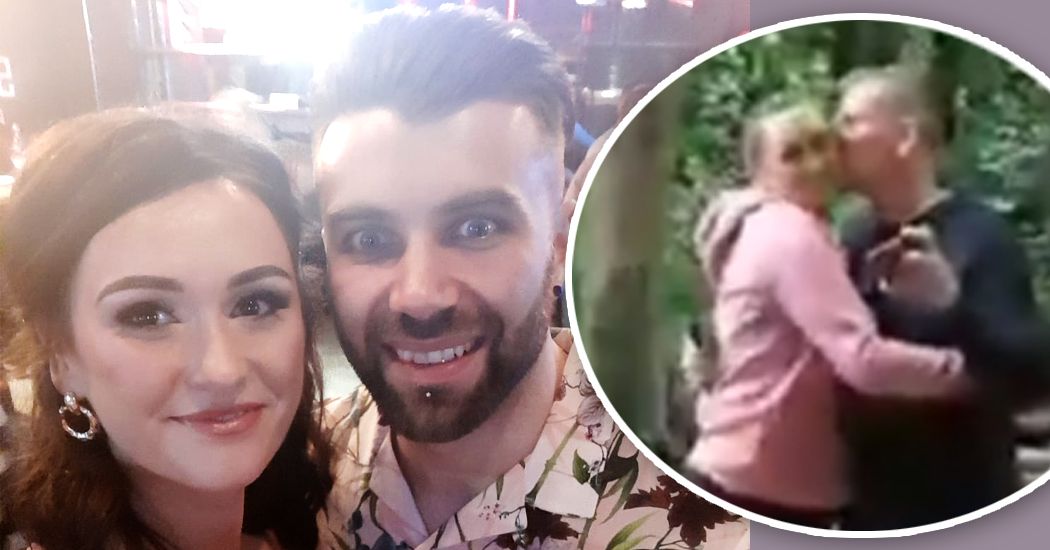 A Donegal bride-to-be got the sweetest surprise on what would have been her wedding day.

Ashley Fox from Letterkenny and her fiancé Sean Tianihad from Gweedore had their wedding date set for 2nd July 2020 – but, like many couples, their big day had to be postponed due to Covid-19.

All wasn’t lost, though, when Ashley’s family decided to turn the disappointment into a heartwarming celebration.

Ashley got the surprise of her life on her ‘would be wedding’ morning when her dad Peter took her on a special trip to walk her down the aisle. He said they would be going for brunch, but afterwards they took a detour to Beech Hill Country House – where Ashley and Sean’s wedding would be taking place.

Little did Ashley know that Sean and their close family members were gathered in the outdoor wedding space, waiting for her with balloons, bubbly and buns. Watch here:

While their real wedding day will have to wait another 10 months, this low key event was full of tears and happy celebrations to brighten everyone’s spirits.

Ashley and Sean postponed their wedding early into the lockdown and were fortunate to secure a new date next May – when they will mark their 10 year anniversary.

But her family’s thoughtful surprise will always stick out as a great memory for Ashley.

On Thursday 2nd July, Ashley left her house with wet hair and a tracksuit on – thinking she would only be going for breakfast with her dad.

“He picked me up that morning, he said: “I have a wee surprise for you in the car, after we go tea I want to take you to the venue and walk you down the aisle.”

“He was actually crying when he said it, I was in such shock. It was so sweet.”

When they arrived at Beech Hill, Peter played some wedding music on his phone and linked Ashley’s arm.

Ashley recalls: “He said: I always wanted to say I walked you down the aisle, because we have another 10 months to go and you never know what’s going to happen.

“We got there and I said could you imagine if people were down there and we were walking down like this?

“Then my whole family was standing with balloons and candles and rose petals and Sean was at the end. I was crying, it was so sweet.”

The celebrations continued that afternoon with lunch at An Grianan Hotel.

Ashley and Sean’s postponed wedding led to a bittersweet week for them at the start of July:

“We literally had everything organised. We were gutted a wee bit. I went and picked my dress up during the week. The week before and on the morning of, the two of us kept thinking what we would have been doing that day,” Ashley said.

“I wanted to put the video up. I knew so many other brides and grooms and in the same situation and everyone was marking the day in their own way.”

Now the pair are counting down the days until 6th May 2021, when their real wedding will take place at Beech Hill. Next time, Ashley and Peter will have had a practice trip down the aisle!