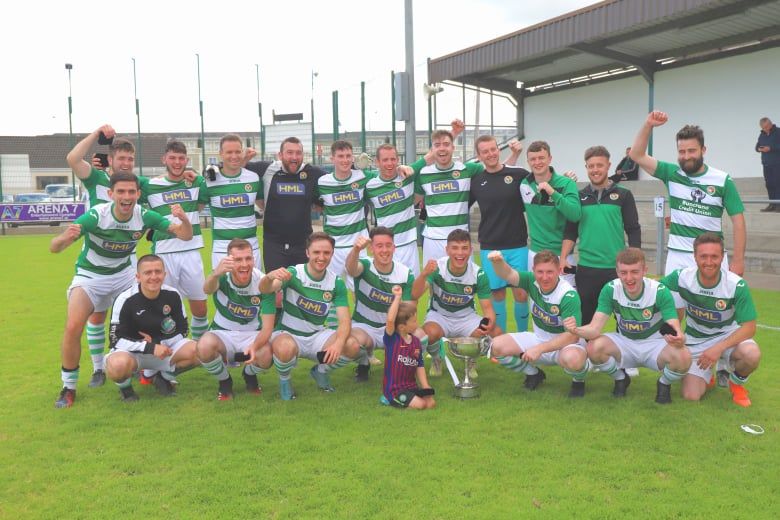 THE INSCRIPTION from the silversmith is by now a familiar one as Cockhill Celtic clinched their EIGHTH successive Ulster Senior League title.

First-half goals by Christy McLaughlin and Jimmy Bradley set Cockhill up to pop the champagne again.

Since 2013, when Donal O’Brien led the Inishowen side to their second USL crown, Cockhill have owned the prize and, with three games to spare, Gavin Cullen’s men are kings again.

It was a case of the old and the new guiding Cockhill to glory with Bradley one the mainstays of their triumphs and McLaughlin a transfer window recruit from Glengad.

Dylan McCroary, on as a substitute just five minutes earlier, pulled one back for Bonagee when he tucked home from Peter Carr’s cut-back, but it was Cockhill’s day – and season -again.

Cockhill – who needed only a draw to secure the prize – hit the front on 23 minutes. Adam Duffy beat the offside trap and, having been initially denied by the legs of Bonagee goalkeeper Eugene Ferry, the Cockhill attacker squared for McLaughlin. The winger tucked into the net and Cockhill were on their way.

Just seven minutes later, they doubled the advantage. After Lee McColgan’s free was blocked by the Bonagee wall, Cockhill recycled and the ball fell invitingly to the experienced Bradley, who made no mistake.

Twelve minutes into the second half, they nearly had a third but Ferry managed to block from Duffy after superb work on the end-line by Bradley created the chance.

Cockhill’s strength-in-depth was outlined by a triple substitution on 66 minutes that saw Malachy McDermott, Moran and Stephen Duffy sprung into action.

It was the champions who began the brighter and Ronan Doherty forced Ferry into early action. The Bonagee ‘keeper palmed Doherty’s effort and smothered the loose ball as Cockhill signalled intent.

Three minutes later, Ferry blocked from Jimmy Bradley, who surged in to get on the end of a centre by the ever-lively Christy McLaughlin.

Bonagee fashioned a good opening on 17 minutes. Garbhan Grant and Micheál Doherty – both on target in a 3-2 win over Letterkenny Rovers four days earlier – worked a short corner with Grant whizzing an effort just past Cullen’s left-hand post.

At 2-0 down, Bonagee needed to find an inspiration, but a Ryan Rainey free kick late in the opening period was off target.

Bonagee have shown good signs of improvement under Jason Gibson, who guided the Dry Arch Park side to the Knockalla Caravans Senior Cup last season.

The home side were given some hope when McCroary steered to the net, but it wasn’t enough to derail Cockhill’s march to yet another title; their eighth in a row and ninth in all.