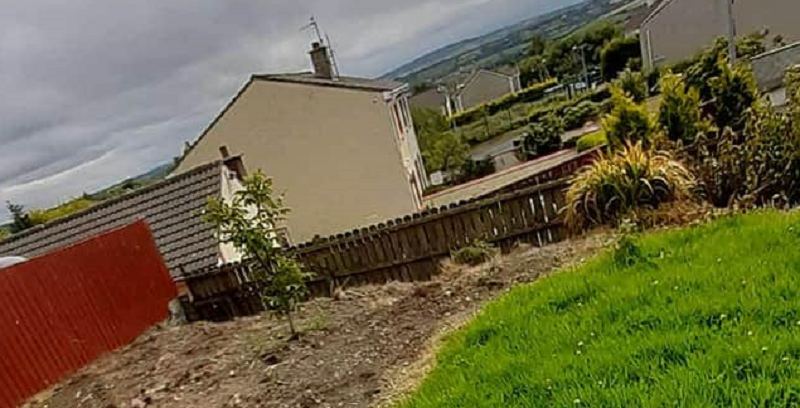 Residents of Long Lane in Letterkenny have expressed their shock after a green area was allegedly destroyed by weedkiller.

Members of the local community had been working together in recent months to spruce up a neglected area between the Hazelbrook and Long Lane housing estates. A memorial tree was planted at the site in honour of a local man who had worked on the green area some years ago. The mini meadow became dubbed as ‘Hazelhenge’.

The green area near Hazelbrook that was destroyed this week

However, local residents were saddened this week to find that their work was destroyed. It is claimed that a weedkiller was used and all plants were removed – leaving nothing but dirt and rock.

“This was not the work of youths or any gang,” said Long Lane Area Residents Association chairperson Finnian O’Donnell.

“It’s completely disgusting to have witnessed this done to an area were residents in both Hazelbrook and other estates on Long Lane came together to create something special for the area, to give a little bit of pride in the place and to have a unique space for residents of all ages to enjoy.”

The residents committee have stated that, as part of their constitution, any toxic weedkiller such as Roundup would not be used in any local projects. Plans are in place to send letters to residents in the area to notify them of the dangers.