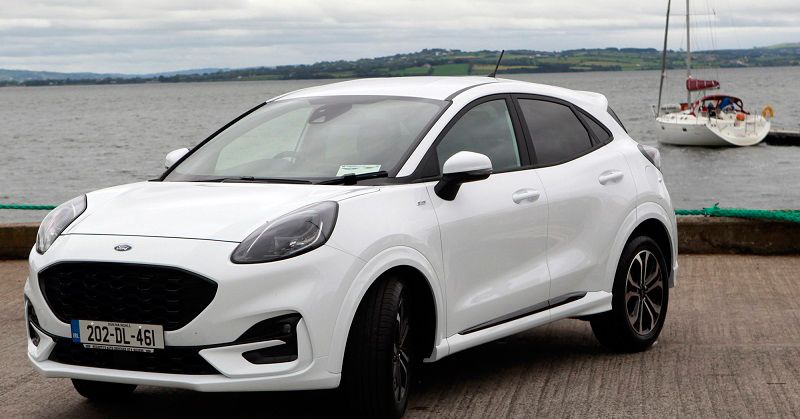 Donegal Daily’s Motoring Columnist Brian McDaid takes the new Ford Puma for a day around the hills and beaches of Ramelton and Rathmullan.

Moorfield Ramelton was always a great place for free wheeling. I have memories of us all piled into a grey Anglia estate (HIH 866) of my father’s, with Rover the dog and all on-board, or my grandfather’s Opel Kadett (HIH 281) with the few windows that opened rolled down and the two small triangular ones flipped out full to turn in as much fresh air inside the baking hot car. 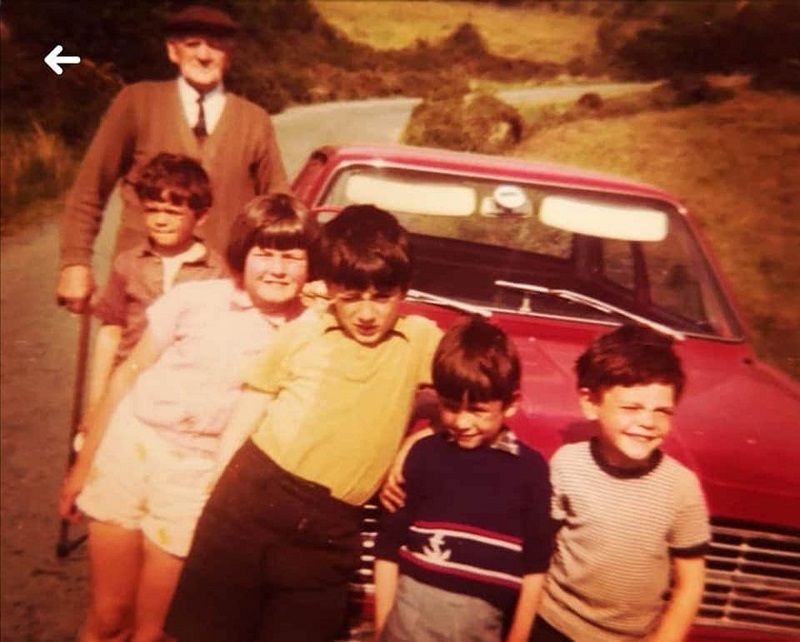 Our Motoring Columnist Brian McDaid in the middle with his grandfather Pop Coyle , cousin Josephine McDaid and brother Neilus, Peadar and Cathal on a day out in the to the beech.

Red leatherette seats that would and could weld themselves to any unsuspecting bare leg. With just the sound of the breeze, the car started to slow up at the bottom of the hill just before the ‘cup and saucer’ the Anglia’s wee one litre engine would be kick-started in 2nd or 3rd gear then my father would be using the brakes and a low gear to head down ‘the tank’ as he would tell us stories about a lorry driver who’s lorry got away on him on the way down the tank and ended up going through the barrier at the bottom of the hill.

“Hold on tight boys,” Dad would call into the back as he let on to us that his brakes had failed, and we would hold or breath so he would turn left at the bottom of the hill. All part of the journey that we made part of the adventure when we were in top form heading to our childhood paradise, the beech, be it at the Kinnegar or Rathmullan.

Last Saturday I was out for a spin in the latest from Ford many generations on from our old Anglia the all new Puma.

Stunning in looks – especially meeting it head on – it would remind you more of something from the Porsche clan than Henry Ford’s family. I was hoping to get a run in this car before the lockdown but it wasn’t to happen, but it was well worth the wait. 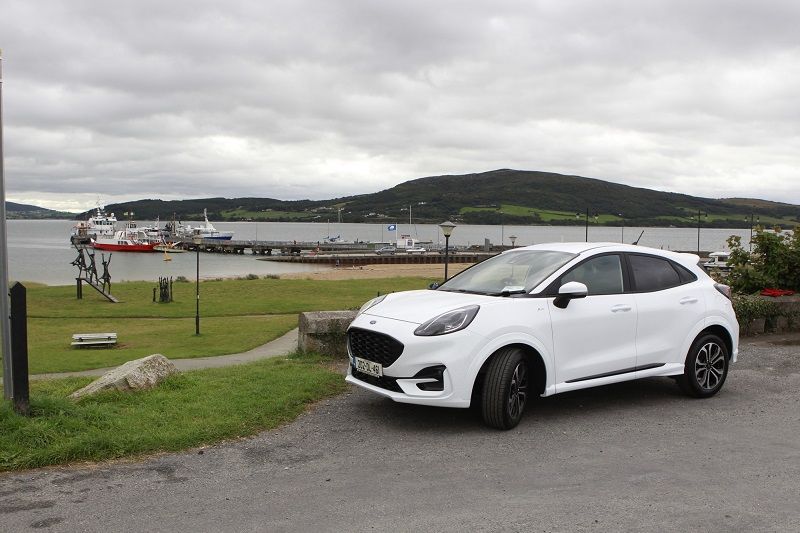 A side on view of the New Ford Puma in Rathmullan at the weekend. Photo Brian McDaid.

I collected the Puma on a Saturday morning and headed to do a job in Rathmullan. I wasn’t long behind the wheel so I knew I was going to enjoy my morning out in this car. It’s turn of speed passing a slow moving coal lorry heading up the hill out of Letterkenny this car felt a lot more powerful than its 125 bhp. I felt like sliding my black mask back up over my mouth to hide the grin of enjoyment that this car was giving me.

The Puma is nothing like the first puma launched by Ford a few decades ago, it was a coupe, this is a crossover. It sits high on the road but when you sit into the new Puma you feel as if you’re sitting lower because of the height of the doors and small windows. We were in the ST Line, which had an all black matching roof lining and the only other colour inside the car was red stitching on focal points like the leather covered steering wheel. 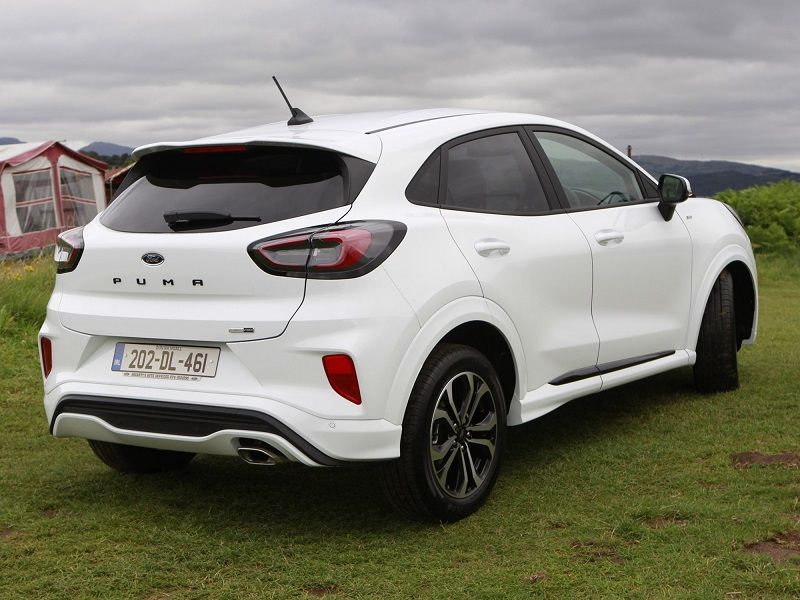 The New Ford Puma Parked up at the Kinnegar in Rathmullen at the weekend. 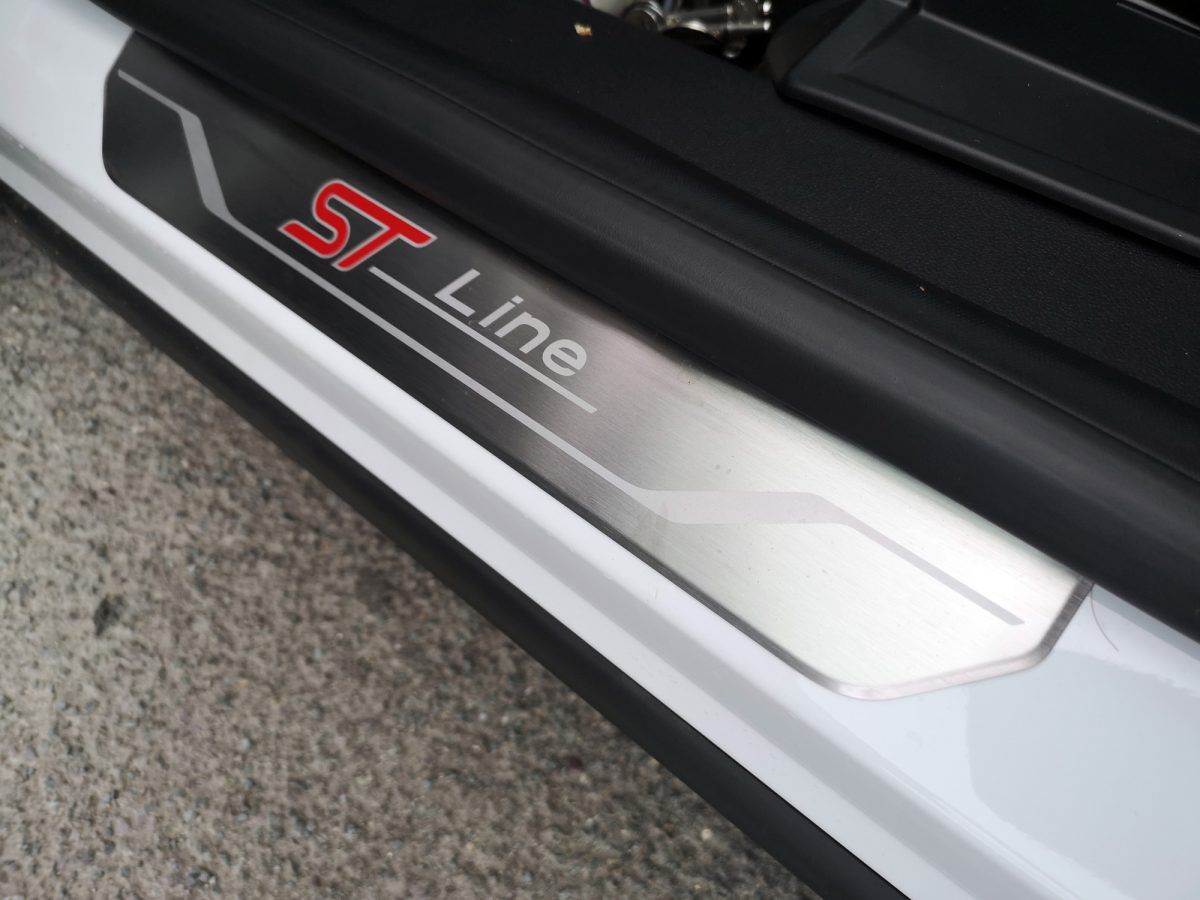 The ST Line Ford Puma which we drove this weekend. 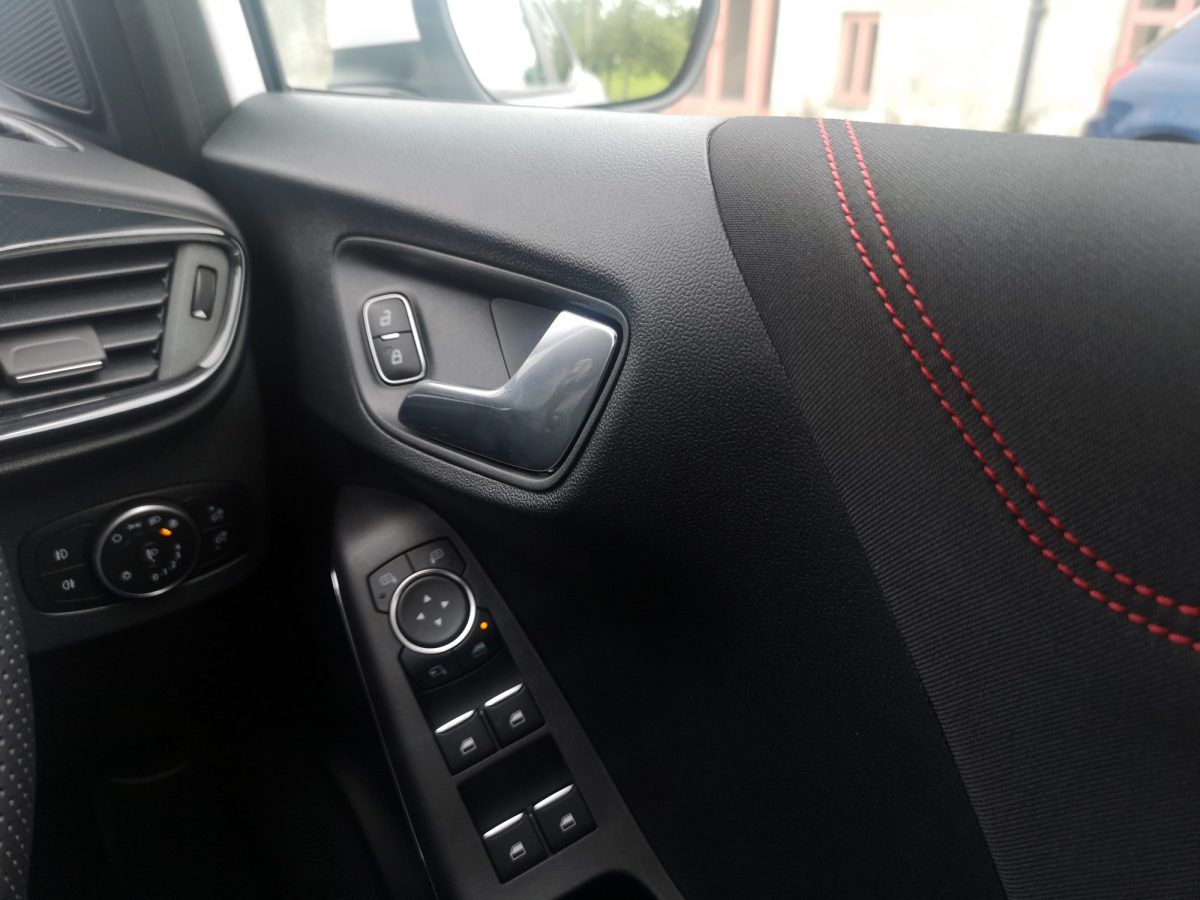 Heading through the countryside on a summer day with the windows down there is a feeling of enjoyment flowing through this car and also very much a feeling of being in control of your driving. Firstly the feedback you get turning into corners and it’s generally sure footing on the road and secondly the fact that this which I forgot to tell you is a hybrid, I had to remind myself a few times on Saturday that I was driving a hybrid mainly because this hybrid does not have an automatic gearbox.

This Puma is what is described as a soft hybrid, where the everyday electrics of a typical car are all powered by the batteries and the engine is left to concentrate on propelling the car along. 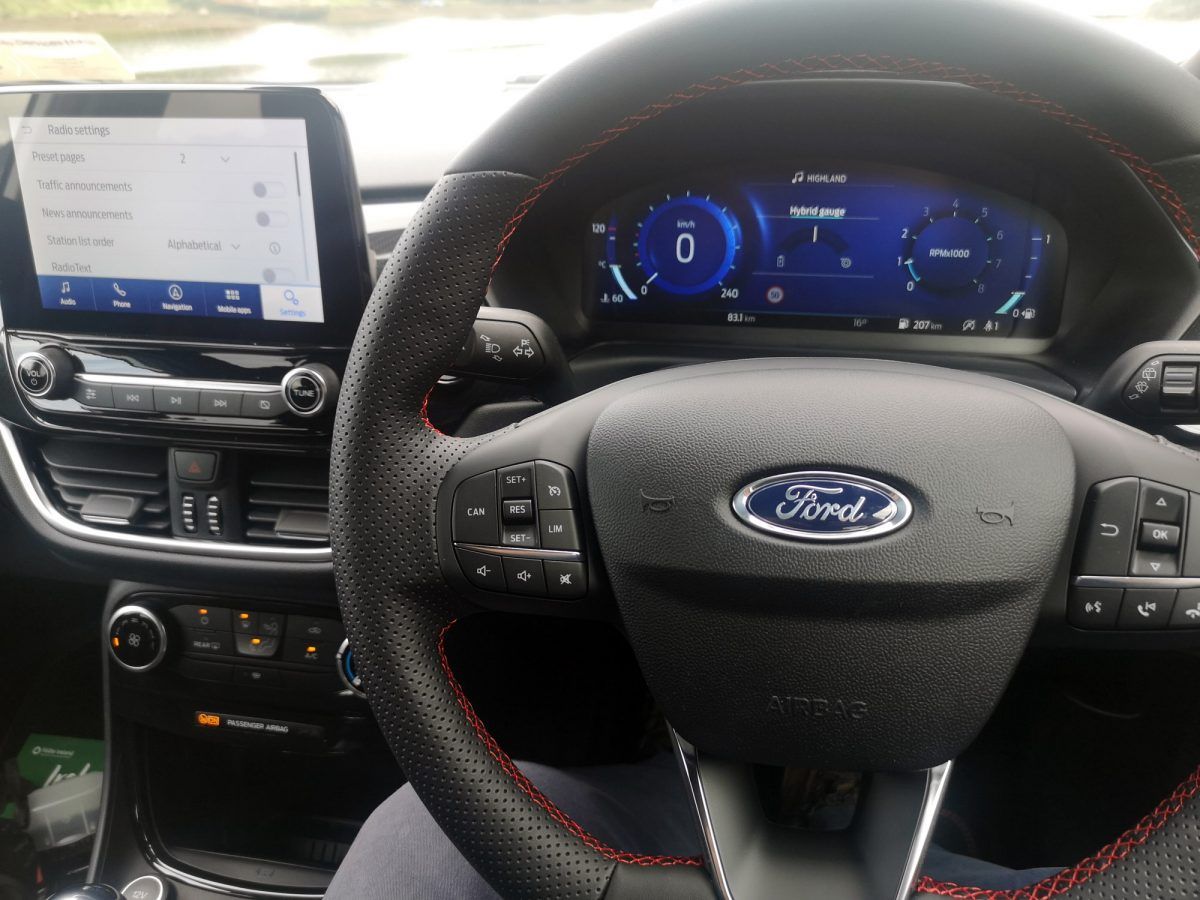 A view of the beautiful layout of the dash on the New Ford Puma. Photo Brian McDaid.

So this is where motoring had turned full circle in my view. Decades on, and I on the same road heading to Rathmullan about to head down Moorefield in a car that has the same small engine size under 1000cc as our old Anglia where my father traditionally switched off the engine to freewheel down the hill to save a few Bob of petrol.

When you lift your foot of the throttle as you start to head down hill this hybrid shows a needle on the dash heading into a charging mode, harvesting power as the car head down the hill. Then when we head down the steep hill that is locally known as ‘the tank’. Using the brakes sends the charging needle into full mode as if to tank up the batteries on-board. 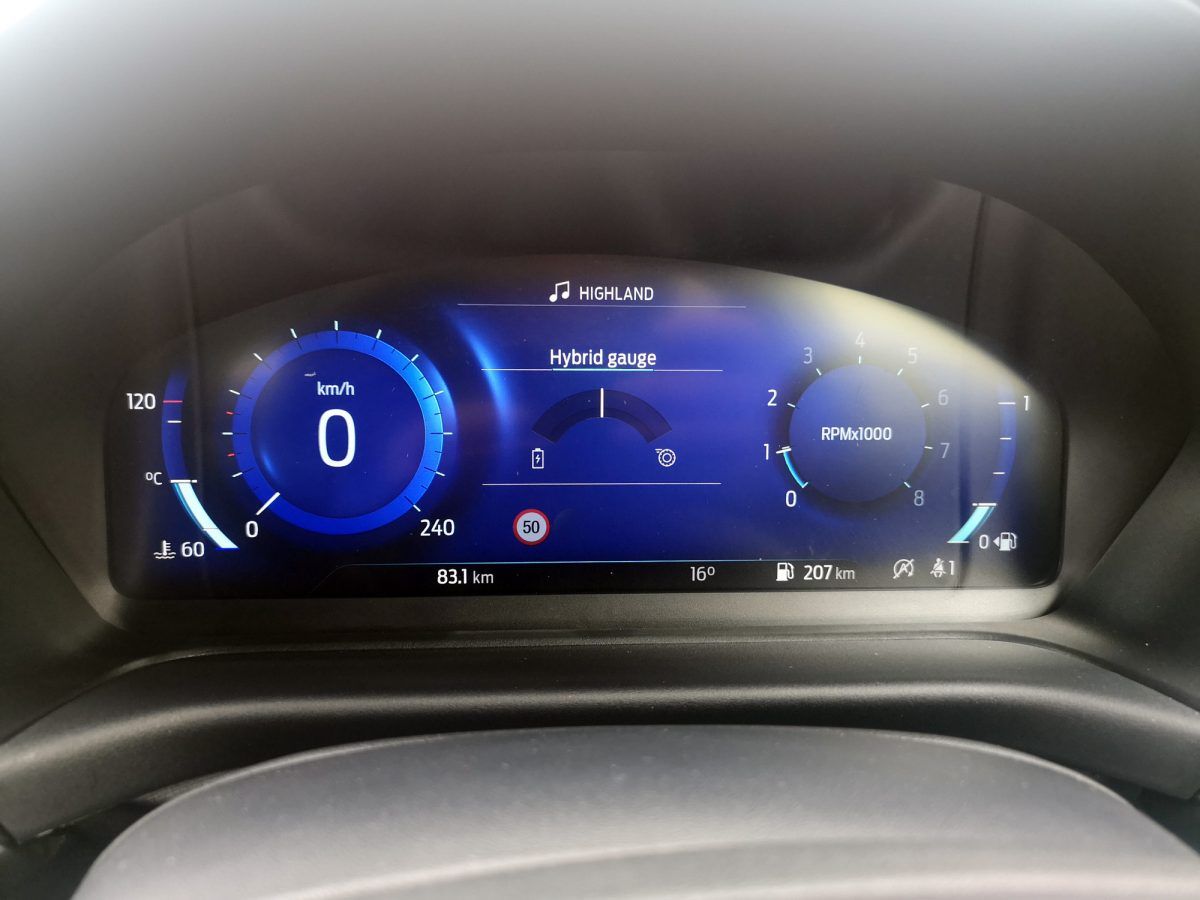 The hybrid gauge on the dash of the new Ford Puma which shows when the car is harvesting energy going down hill or braking. Photo Brian McDaid.

Our photos show the Puma on the pier on Rathmullan with a yacht in the background which has taken its power to propel itself from the wind, in just the same way this hybrid Puma takes energy from hills of Donegal going down hill.

Ford has done a great job with this all new Puma, they have hit an enjoyment cord that will strike a note with people who enjoy driving. Ford has thought of everything for a journey they have even included the possibility of taking the kitchen sink with you, a Belfast sink! 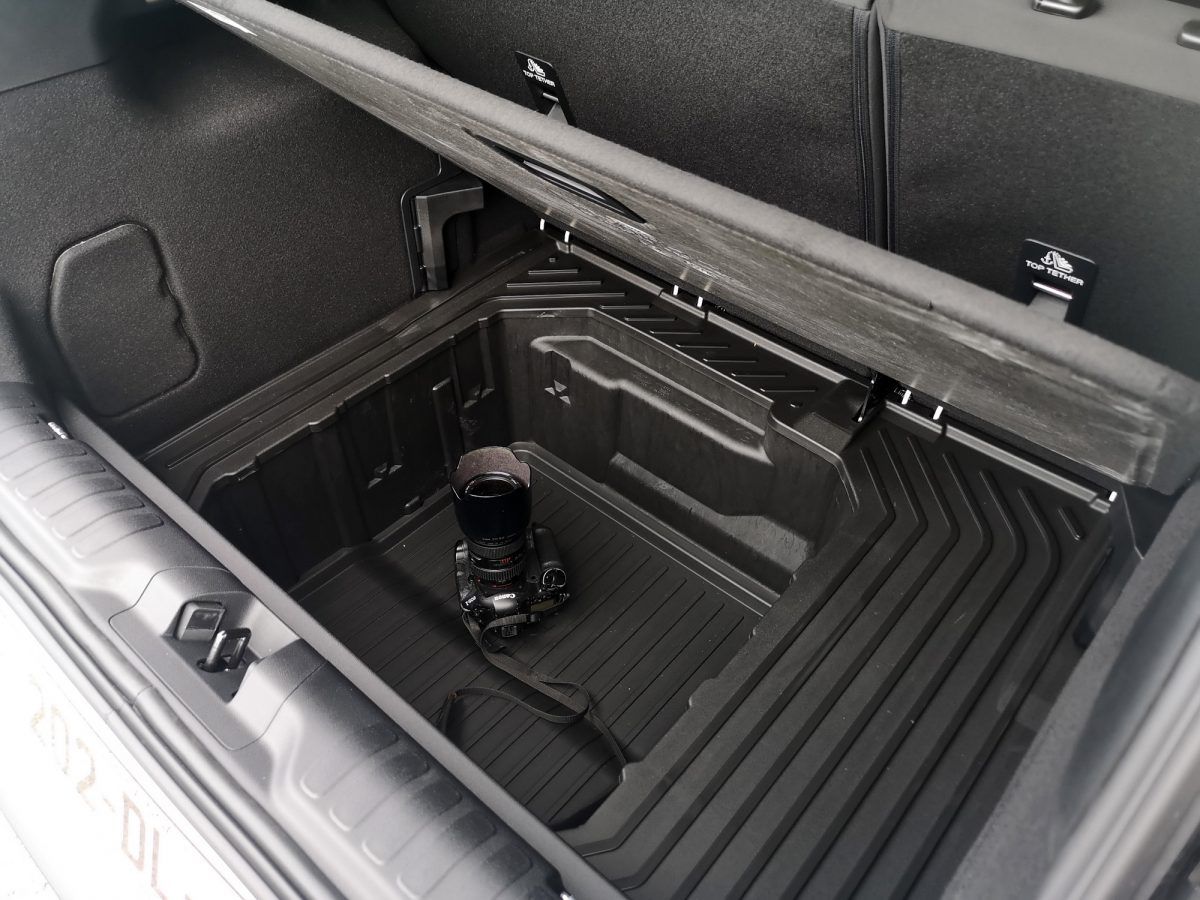 The massive luggage space under the floor in the boot of the new Puma affectionally called the Belfast sink. Photo Brian McDaid.

Underneath the floor of the boot in the new Focus have included a massive deep box shaped underfloor luggage space in which was hard wearing plastic. They even have a bung in it so it can be drained after washing it out. It looks very novel to have this deep luggage area which is great for keeping anything of value out of view from prying eyes, but long term I think this space is more likely to be designed for banks of batteries for an all electric version in the future.

Ford says this car will give you a return of well over 50 miles to the gallon, that could have been easy to achieve if Ford hadn’t made this car so enjoyable to drive.

Last Saturday I had a very enjoyable few hours driving this car, and the temptation is always there to put the foot down in this very responsive engine. Ford is offering a day long test drive in this new Puma, details of which are available at Hegarty’s Letterkenny. The 24 hrs test drive is also available on the New Kuga and ends on to the 31st of August

Summing up, this all new Ford Puma I think that Ford have made this crossover one of the best available and a range of ST Line to Titanum there will be a finish and trim that will cater for everyone’s taste.

DD Motoring: A day in the life of a Puma was last modified: July 29th, 2020 by Brian McDaid
Tags:
Brian McDaidcolumnfordford pumamotoringnew cars